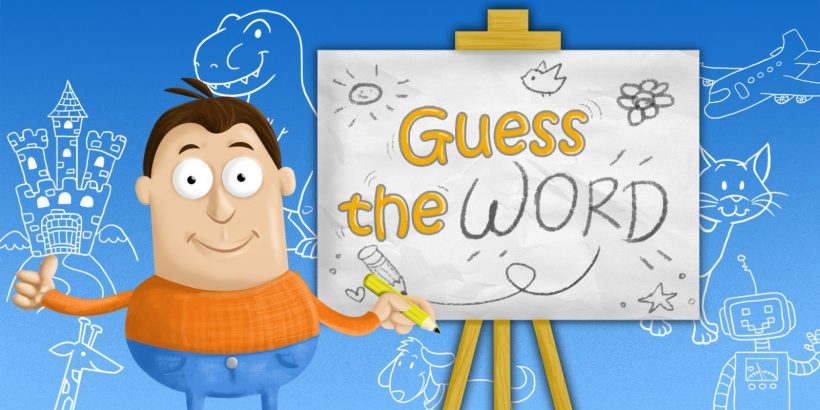 Since the advent of the internet, we’ve all become aware that there are a lot of really stupid people out there. From the ones who took on the cinnamon challenge to those who can’t work out the most basic of riddles, there are some people who manage to shock the entire world when they say that they actually came through some sort of schooling. But it’s safe to say that not a single one of them would be any more intelligent if they had had a resource like Guess the Word at their disposal in their formative days.

We say resource, because this is certainly no game. But even resource is doing far too much service to Guess the Word, which is as paper-thin a package as we could possibly expect on Switch. It’s basically a really, really basic form of hangman-cum-Pictionary, with a fat guy in an orange shirt drawing a picture and the ‘player’ sliding scrabble-like letter tiles into place to form a word. You get a run of about ten words in a row, and then you’re awarded what seems to be an automatic full three-star rating. Then you start again; there’s no progression or anything else to move on to.

There’s nothing else on offer in this damp squib of a package, which could have really done with a shoot-em-up level allowing you to take out the brain-dead orange shirt guy with a cannon to at least give things a semblance of being interesting. He repeatedly shouts ‘yeah’ and great’ for every correct answer, then repeatedly heckles you to start again once you reach the end of a run.

We simply can’t comprehend that there are kids who would get more than a minute’s entertainment out of Guess the Word. With seemingly hours of time on the clock to answer each word, you could quite feasibly go and put the kettle on, make a coffee, drink it and return to the game to find you still have time left. There’s also no penalty for sliding the tiles into the wrong place. There’s not even a reasonable variety of different words, which is pretty unforgivable – I even totted them all up after several monotonous playthroughs, and counted just TWENTY-SIX different words. That’s enough to actually include them all in this review’s word count, so here goes: Cat, Dog, Letter, Dragons, Fish, Castle, Sun, Fork, Spoon, Pears, Doll, Mouse, Ship, Rain, Ghost, Candies, Cupcake, Trumpet, Giraffe, Bananas, Robot, Socks, Car, Worm, Plane and IceCream – yes, IceCream, as just the one word. That’s a pitiful amount of words in what is all told a pitiful package.

Guess the Word shouldn’t be anywhere near your Switch collection – collectors should only add it when it’s on sale on the eShop.

Guess the Word is really poor on all fronts. Light on content, entertainment and education, it doesn’t have a place on the Switch eShop.