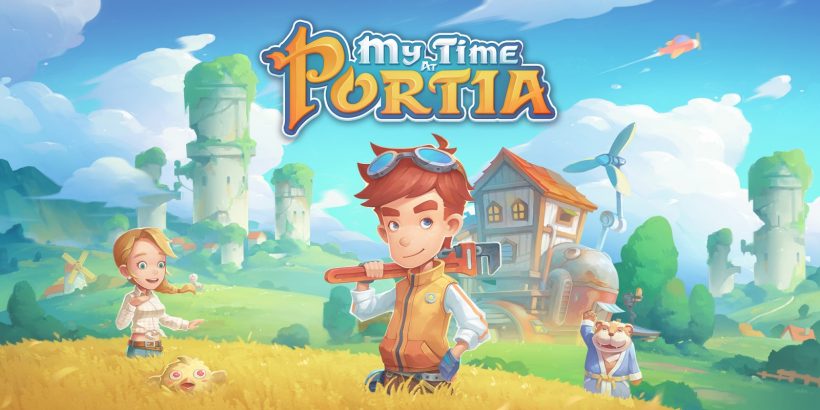 While social simulation giants such as Animal Crossing and – albeit to a lesser extent of late – Harvest Moon see continued success with each new instalment, the genre still lacks the widespread appeal that others have in the current market. Developer ConcernedApe’s breakout hit Stardew Valley continues to be a runaway success despite this, however, and it was only a matter of time before another developer attempted to capitalise on the renewed interest. Enter My Time at Portia from Pathea Games.

My Time at Portia’s opening beats and gameplay direction will be – thematically, at least – immediately recognisable to players of any of the aforementioned games. You settle in the post-apocalyptic town of Portia with the aim of restoring its barren locale back to its former glory, all while putting your own unique spin on the design. You’re not alone in this quest, however, with multiple other denizens building alongside you in a strikingly competitive manner.

The typical roles – such as farming and building – sit at the forefront of your picturesque vacation, though additional careers soon become available as well, including a combat-focused vocation. All have considerable depth to them, which is where My Time at Portia differentiates itself in a meaningful way, and this is further reinforced by the many quests you find yourself carrying out on your day-to-day travels.

How such quests are assigned – either via the commission board, or other means – dictates their “difficulty”, with longer quests providing more tangible long-term benefits, both for your character and Portia itself. Often, quest objectives are laid before you with little-to-no explanation on how to complete them, making for a frustrating and confusing experience. For instance, building a particular construction may be the ultimate goal, but the means by which you manage this are often clouded by sporadic nuggets of misinformation, as if they were bullet points where you could skip steps 4 – 9, heading straight to point 12.

Still, the gameplay of My Time at Portia shines on Nintendo Switch, its sheer depth slowly unravelling after many hours of play in the various available ventures. While much of it has been seen before, the copious number of opportunities you have in-game are astounding, as is the freedom to throw down your axe anytime and try something new. Relationship-building with your fellow citizens, gardening and, surprisingly, in-depth combat, are but a few activities you can indulge countless hours in.

Sadly, performance issues – in terms of graphics, stuttering, and otherwise – pervade even the most menial of tasks in the game. Pop-in figures and landscapes appear jagged and harrowing when running across the multitude of barren landscapes found throughout the world, though perhaps these issues may be improved upon or rectified fully in future patches. Character models are simple and clean by design, but they lack any distinct character in themselves, with several appearing muddled beyond recognition. While this is likely linked to the Switch’s rendering limitations, it is certainly disappointing, as the extent of which this is found within My Time at Portia is far beyond that we have seen in other titles.

Such inconsistencies make My Time at Portia feel thoroughly unfinished, its lack of refinement permeating every corner of its supposedly idyllic adventure. Your first major experience – bar selecting “New Game” – is of an excruciatingly long loading screen that lacks any ambient noise and movement to convince you that, no, your console hasn’t crashed. Long load times were even more rife prior to the Day 1 patch, but thankfully, that rectified several issues.

The number of quality of life improvements that could be made to lessen the “early access” vibe My Time at Portia exudes are plentiful. The inconsistent presence of text rendering sound effects, in addition to the difficulty by which the objective stars can be seen on the minimap when in handheld mode, are just two of many immediately apparent issues that dampen the gameplay experience in those crucial opening moments.

It’s a shame that the overall quality of My Time at Portia on Nintendo Switch is such a disappointment, as to completely prevent you from forming that addictive link that its preceding peers perfected. Should the coming months focus on the quality of life fixes that the game so desperately deserves, this will certainly be a title that contends with the very best of its genre.

Until then, My Time at Portia is worth but a fleeting visit on Nintendo Switch.

Though the content and concept of My Time at Portia is sublime, having the potential to enslave your attention for months to come, the Switch port lacks the polish and love it so desperately deserves. Should quality of life fixes be implemented, this will certainly be worth sinking your time into. For now, not so much.