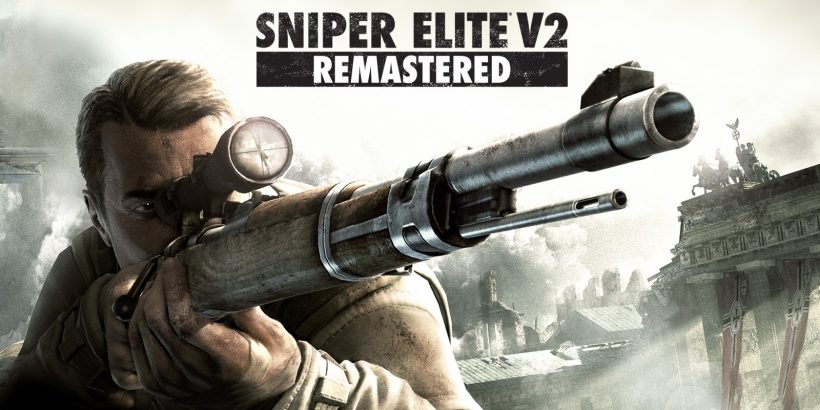 Sniper Elite V2 Remastered is rather obviously a port of an older title, this one having previously been on Wii U, finding its way to the Nintendo Switch. That in itself is not new; the system is rapidly attracting titles from yesteryear to find a new audience. The military shooter scene on the Switch is also something that’s a little threadbare, so we had high hopes for this one.

The first thing to take into consideration is that despite its military attire and setting and the fabulous scope of weapons in your arsenal, Sniper Elite V2 Remastered is just as much a tactical stealth game as it is a WWII-themed shooter. Run-and-gun this is not: you are tasked with eliminating scientists that are developing the fabled V2 rockets. Your journey will see you engage in a whole host of missions where you’ll need to be patient, sneaky, and, of course, deadly with a sniper rifle.

Presented in the third person, the game controls exactly as you’d expect. A is your interact button (vaulting, completing mission objectives like planting explosives), B allows you to crouch (or go prone), Y is your reload and X snaps you into cover, should any be available. Depressing the left stick enables sprinting, whilst shooting your weapon – of which you can have three – is with ZR. Aiming is actually on two buttons, with ZL being your aim down the sights – the scope is activated by a press of the L. R is for using whichever additional item you have selected, being it a trusty rock, a trip mine or for lobbing grenades. It’s also used for holding your breath for a short while when sniping!

Mastery of all of these will be essential, and remembering that the sniper uses a different zoom button will help perfect your shots. Without initially taking this on board, it was difficult to work out if the game was broken or not – it wasn’t. What will be broken on the other hand, is many of your enemies’ bones and body parts. Successful shots activate a slow-motion “X-Ray Kill”, and will show the bullet’s trajectory through each poor solider. Wherever you strike them gets played out incredibly graphically, some worse than others. If you don’t cringe when blasting expertly through some poor chaps cherries then you must be evil…

As a “remastered” game, V2 has had a bit of a spruce up since its original 2012 release, and it also comes with all of the subsequently released DLC. In addition to the ten-mission main campaign, you’ll also get a blast at a variety of other modes. Firstly, there are four additional challenge missions, including one where you can actually assassinate Hitler himself, if you so desire. On top of that is a “Kill Tally” mode, which essentially acts as the games’ “horde” style mode. Waves of enemies will descend upon you, and you have to rack up as many kills as you can, surviving as long as possible and utilising all of the skills you’ve learned along the way.

There’s also multiplayer action in play too, whether you fancied tackling the main campaign with others (online or locally), or just engaging in some long distance snipe-offs. The servers aren’t particularly populated at the time of review, so hopefully as (and if) more people pick the game up then you’ll get more action.

So, should you pick it up? Well, on the whole, I quite enjoyed my time with Sniper Elite V2 Remastered. The pace of the game took a while to grasp, being more used to traditional shooters, but as the campaign wore on I grew more captivated. That said, it is just hiding in cover and sniping – and 1000 poor German troops were slaughtered, some quite graphically – during the jolly across Germany. There were some graphical issues with the x-ray kill camera, as sometimes it wouldn’t show correctly. Whether this is unique to the Switch version or an issue with the series in general is unclear

There’s loads to do within the game too, with in-game achievements, a variety of modes and online, as well as two types of collectibles, bottles and gold bars. Those that love that sort of thing will be right at home. The smaller, bite-sized nature of the missions and generous checkpoints work well, meaning it’s also right at home on the Switch. The only real grievance is that overall it could get a little monotonous, but if you love sniping and being tactical, then you’ll find a lot to keep you busy for some time. Plus, that clank as your sniper round penetrates a soldier’s metal helmet is incredibly satisfying.

There’s a lot to do in Sniper Elite V2 Remastered and it’s very well presented, and addictive. It might get old quickly – essentially executing the same play repeatedly – but you’ll definitely have fun whilst you are doing it.