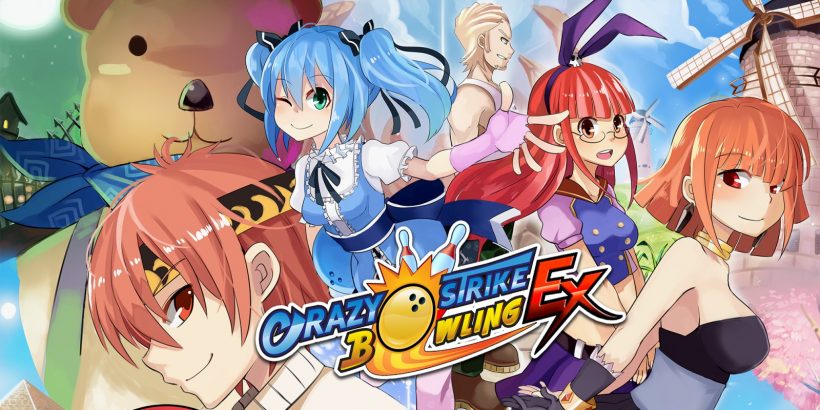 Crazy Strike Bowling EX brings anime-infused ten-pin bowling to the Nintendo Switch. Is it a bit of a turkey or so good that it’s worth picking up a spare? Obligatory bowling puns out of the way, let’s find out if it might be up your alley. Sorry.

Jumping straight into Exhibition mode, it’s no-frills bowling for 1-4 people. By beating target scores you’ll unlock increasingly diverse locations in which someone has inexplicably erected a bowling alley. It seems grossly irresponsible to throw a heavy ball around a crystal mine, for example. Regardless of the location though, the action remains the same. You’ll soon be throwing strike after strike, but there’s something weirdly meditative about the mindless repetition.

When it came to choosing a character, naturally this reviewer ignored the hip youngsters and plumped for a tubby bear named Mr Jenkins. Allowing myself a micro-chuckle at his description – “whether he’s a real bear or just some guy in a bear suit” – I soon cracked on with the game. The default control method is button-based, but motion controls are also available. These are fairly clunkily implemented and don’t feel a patch on the old Wii waggle controls; you’d feel that the Joy-Con would be the perfect fit for a game such as this.

As it stands then, traditional button controls are the way to go and are simple enough to get to grips with. In fact, if you’ve ever played a golf game then the timing-based gauge for setting power and accuracy will feel very familiar. Given the ubiquity of this control method, you’d think it would be a simple one to explain during your first outing in Exhibition mode, but the tutorials are tucked away in a separate menu. Still, you can easily muddle through your first couple of frames and won’t need further explanation until you move on to more adventurous game modes.

Beyond Exhibition, “Crazy Exhibition” introduces power-ups and obstacles to spice things up a bit. To call this mode crazy is a bit of a stretch, but it at least forces you to engage a small percentage of your brain. Add in Challenge and Battle modes and there are no shortage of gameplay options, and this is arguably Crazy Strike Bowling EX’s greatest strength. There’s also some basic character customisation on offer in the Locker Room, so if you thought a man in a bear suit hanging out with teenagers was creepy, wait until you’ve dressed him in a jester outfit.

The biggest compliment to be paid to the presentation of Crazy Strike Bowling EX is that is has an attractive icon and pleasant loading screens. It’s a different story when the game’s in motion though. Textures and animations are very rough around the edges and while the anime stylings are cute, the graphics are extremely dated. Similarly, the music and sound design never even flirts with the idea of being anything beyond passable.

My 6-year-old son is a big fan of bowling on Wii Sports, so with the extra kid-friendly coating I felt sure he’d love this, but when I asked for his verdict, his one word response was “rubbish”. Children can be so cruel. To its credit, the game is a great deal more fun in multiplayer, but since statistically you’re never more than five feet away from a Nintendo Wii, there’s a strong argument for dusting it off rather than buying Crazy Strike Bowling EX.

Crazy Strike Bowling EX does enough to lift itself above the deluge of eShop shovelware, but only just. There’s fun to be had here, but not as much as the colourful characters might lead you to believe.