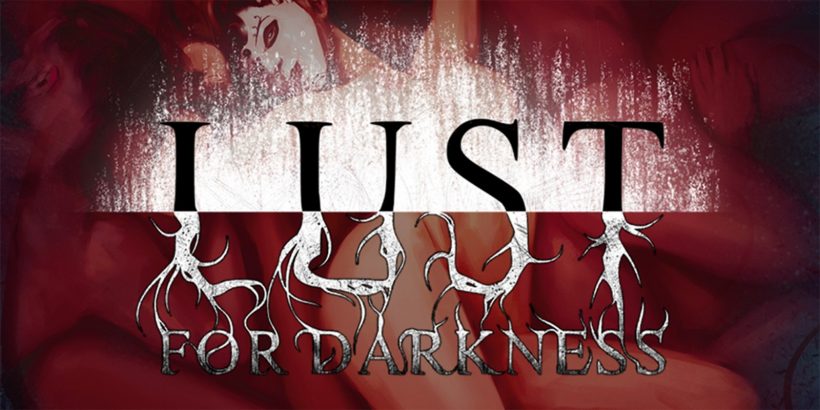 MovieGames Lunarium and SimFabric immediately caught the eye with the sudden drop of Lust for Darkness onto the Switch eShop this month. A short trailer showed that this was quite the antithesis to what Nintendo systems are known for, with two masked characters preparing to elope and hints of a sinister undertone at play. Sex sells, of course, but people who come to the game looking for that are likely to be disappointed.

That’s because, on the contrary to how the trailer makes it seem, sex accounts for 10% of the game’s entertainment at a push. Yes, there are graphic sex scenes; the story involves the main character’s pregnant partner disappearing and resurfacing a year later at the heart of a demonic sex cult. After a short while of raciness, as the cult gather in an abandoned mansion and fulfil their carnal desires, the sexiness of the game is all but over, and instead the focus shifts to an ungodly, otherworldly shift between dimensions and, spoilers aside, the cult become destroyed by their third for never-ending sexual pleasure.

The game has a two-to-three-hour run time, for all of you maths fans who might want to calculate how much hibbidy-dibbidy you’re likely to see. But even in the game’s brief sex scenes, the brightness, even when turned up to max in the options menu, is ridiculously dim, and you can barely see a thing. With that in mind, Lust for Darkness is more akin to a Layers of Fear, a Don’t Knock Twice or an Outlast, at a push – with the focus being on the horror, with some stealth segments, some scares and little in the way of freedom to deviate from the linear pathway.

And in that, it doesn’t feel like anything much special. Don’t Knock Twice dealt with the alternative realm much earlier on Switch, and there was a sense of déjà vu playing through this having already experienced that. Lust for Darkness isn’t quite long enough to last long in the memory, which is the main plus point of the limited sexual content. The chase sections are as challenging as the action gets; otherwise the game is about only plodding around and picking up items which might have some effect on progression. You can waste a bunch of time opening cupboards and drawers, with very few items of note to be found in any of them, but that’s the only way the runtime is likely to increase beyond one or two sittings.

The main place where the game falls down, though, is in its performance. Sections are plagued by slowdown and low resolution, and it’s not like there’s a lot going on on-screen at the same time at any point other than the first entry into the mansion. It really is quite jarring at times, with movement slowed and the graphics looking like something the Gamecube could have handled. Errors in on-screen prompts – the game tells you to press L to run when it should be a click of the left stick – are pretty unforgivable, particularly when running is of crucial importance in the chase segments. But my playthrough ended with a game-breaking bug after dying at the final boss, as the boss would no longer appear after I respawned.

That’s not a good impression in any case – and counted towards making this game a pretty big disappointment on the thrills and chills that the game’s trailer promised.

Lust for Darkness doesn’t really deliver what its trailer promises. The scares aren’t great, other than the jarring ‘caught’ noise on the short stealth section. With a short run-time, it’s an underwhelming experience.