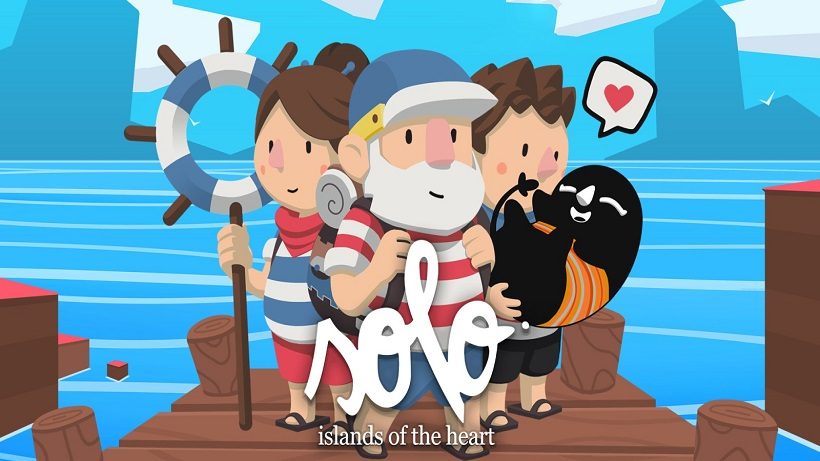 Solo: Islands of the Heart (no, not the unannounced sequel to Solo: A Star Wars Story) plays with the idea of whether a video game is capable of helping players to understand their own perception of the feelings of the heart. Oh, and how best to get players to move around some boxes. No, seriously.

There is very little to the game in terms of its premise, aside from coming to terms with how you feel about the one you love, perhaps. Functionally, the premise acts as background noise, and it’s up to you how much attention you pay to it, or whether you tailor the gameplay to your own experiences.

The movement of boxes in Solo – a.k.a. the main activity – is, unfortunately, not some abstract representation of how people compartmentalise their emotions into different boxes and deal with them as and when necessary. Instead, these are very literal boxes that need to be arranged in specific ways to allow your character to traverse across three different archipelagos. This is done via a magical wand given to you, although there is very little context to this.

You’ll also need to use these same boxes to reach various mini lighthouses that are spread across the islands, thereby waking up their corresponding totems. Different types of boxes are introduced as you progress, which add to the game’s complexity. It’s not just about how you place the boxes, as you also need to orient them in different ways, as well as taking advantage of certain boxes’ unique abilities. The fan box is particularly versatile, for instance.

At times, arranging the boxes can feel like trial-and-error, but there is a certain logic to arranging them. This is especially apparent during the few shadow puzzles that appear at the end of an archipelago, where the placement of the boxes must form a shadow that matches the pattern on the floor. These are the more rewarding of the puzzles in Solo, as there is a definitive solution.

Disappointingly, these puzzles do not seemingly relate to the core narrative premise of Solo, which is matters of the heart. What the boxes do help with is enabling you to reach the previously mentioned totems. These ask you rather personal questions about how you would perceive or react to a certain situation regarding a loved one, or love in general. The goal – allegedly – is to provide an introspective experience for the player based upon their responses to these questions throughout the relatively short gameplay experience. Whether that is achieved will be firmly down to the individual player’s opinion of the game itself.

Performance-wise, Solo runs well enough on the Switch. Its visual style is a little reminiscent of Wind Waker, unfortunately sometimes looking a little rough around the edges. Sometimes, the game appears to be struggling on the hardware, though given the relaxing pace of the game, players’ experiences will not be drastically hindered. Though the camera angles can sometimes be bothersome, the main controls work well, which is significant given that it could have been a tedious experience to move the boxes around.

Ultimately, Solo does not provide the deep introspective experience it sets out to achieve. There is some acknowledgement of your choices at the end, but only providing a somewhat generic text response that has no bearing on the game. More disappointing is that the choices have no bearing on the two endings, which are simple uninteresting choices that provide equally uninteresting outcomes.

Solo: Islands of the Heart is a pleasant game with some interesting puzzle box action, but its core premise, built around relationships, is disappointingly underwhelming, and disconnected from the gameplay surrounding it.