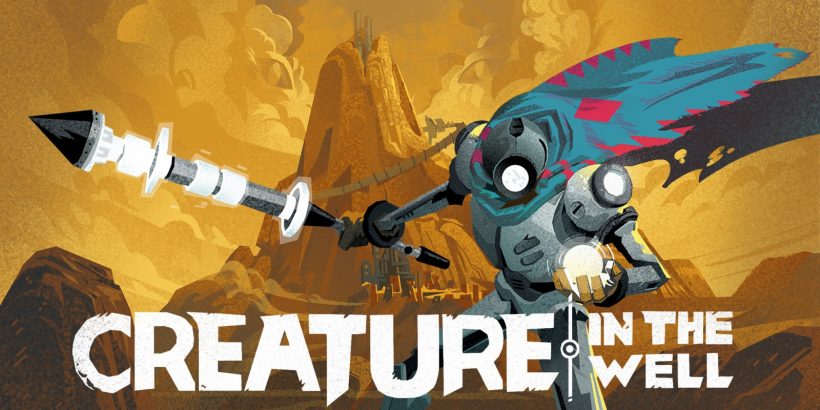 Creature in the Well represents one of the more unexpected clashes of different genres that we’ve seen on the Switch eShop. In fact, there are at least three genres at play here, with Flight School Studio producing a hack ‘n’ slash dungeon crawler meshed with pinball, of all things.

Set in caves within a remote desert settlement, the game’s format operates through swinging your sword-like objects at orbs which act as pinballs, cannoning off everything in their path until they run out of juice. There’s a decent range of swords and household objects which can be used as your ‘flippers’, per se, and there’s also changes to your character’s outfit littered across the dungeons and the landscape. X handles the simple striking of the orbs, while Y can be used to charge, collecting multiple orbs to deal out more powerful strikes which amass more points than your standard shots.

Bumper-like objects make for the standard enemies of the game; while stationary, hitting them can inject them with the energy to fire back a dangerous orb signified by a red trail of light. But each of the sentient bumpers act as the meat and potatoes of the game’s progression.

You can rack up points, a la regular pinball, by hitting them (though they will sink into the ground and not be able to be hit any more after a certain point), and amassing a certain amount of points will allow you to open the door to the next room.

There are more points on offer in each room than is necessary in order to get the door open, which comes in handy as it allows you to simply run to the door in the more challenging rooms in order to bypass them. And there are some rooms where you’ll really want to do this: this reviewer is willing to bet that they will be the timed rooms, which require you to nail consecutive perfect shots in a multitude of directions in order to hit one narrow object, then the next, then the next, with each only appearing for a miniscule number of seconds after being activated by perfectly hitting the previous target at least twice.

It’s a clever concept, for sure, but things aren’t really explained too well early on. Your health, which can sap quite easily if you’re clumsy with hazards in the dungeons, can be refilled by standing in a ‘pool of life replenishment’, of sorts, in the dungeon’s main room, and periodically located throughout the dungeons themselves. But you’re never told this explicitly, and so there was a decent amount of frustration at getting wiped out immediately due to the game restarting you with just a smidgen of health each time you get killed.

But, once you get the hang of the mechanics, Creature in the Well is a challenging and fun game. There’s a little repetition in room layouts, which can be disappointing, but with eight relatively deep dungeons to explore, the game did feel like it had a lot to offer.

It’s possibly not a game you want to finish in one sitting, despite its length making that feat rather achievable – that’s because the frustration of being unable to nail tricky shots, and then having to make the arduous trek from the village outside the dungeon all the way back in each time you die, can be a bit of a bore. It gets top marks for a novel concept idea, though.

Creature in the Well is a clever and challenging original take on dungeon-crawl pinball. It might be too tricky at times, and irritating when you have to trek back to the point you died, but the action sure is fun.