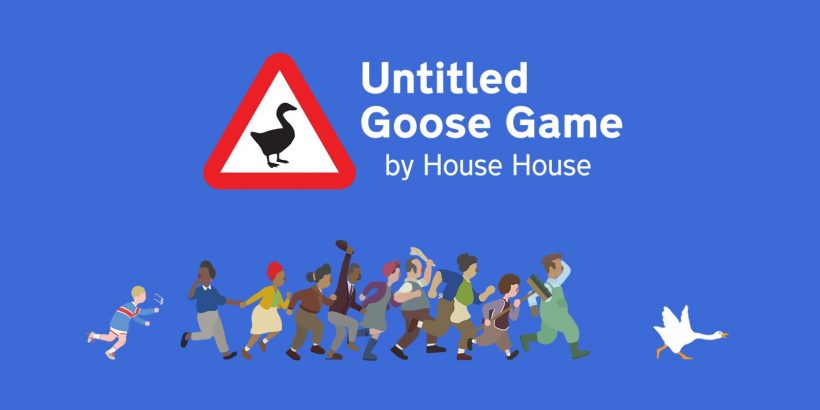 It’s been said once, and I’ll say it again: games that focus on a single key idea often offer a brilliant experience, and Untitled Goose Game from Australian studio House House is no exception to this. As the eShop description puts it, ‘you are a horrible goose’; naturally, your only ambition is to live up to this characterisation.

With little more than a dedicated honking button and a to-do list of mischievous pranks to pull, the game’s short ninety-or-so minutes will have you laughing out loud as you run around ruining the lives of the many unsuspecting villagers. You’re not above stealing, locking people in garages, or throwing someone’s clean laundry into a fountain; ruining picnics, tripping up children, and even getting on TV is all in a day’s work for you. You’re a goose, after all; it’s not like you can be expected to have much of a moral compass.

As for the gameplay itself, it sits somewhere between stealth, action, and puzzle; the combination works well, thanks to the game’s humour and quirkiness. You possess a to-do list which catalogues the many pranks you must pull, and this acts as something of a quest log for your time with the game. Accomplishing these tasks tends to be pretty straightforward, mostly requiring you to steal things, run, and honk (essential!), but this simplicity doesn’t negate how utterly hilarious it is to play them out.

While it’s helpful to have on hand to guide your gameplay, the to-do list doesn’t work perfectly; I did come across an issue where although I had completed one particular objective, the task was never crossed off the list. Thankfully, this didn’t prevent me from progressing, although it’s not clear whether this was because the game had registered the achievement without crossing it off, or whether the game doesn’t require every objective to be completed in order to move to a new stage.

Similarly, at times the game feels to be lacking some polish. For example, some of the animations can appear stilted and robotic, and occasionally NPCs will glide along the ground instead of walking, particularly if you’ve backed them into a corner. Likewise, the NPCs are incredibly unintelligent, which can be mildly immersion-breaking at times. The controls could also stand to be more responsive; when you’re running, for example, it’s very awkward to change directions quickly. This may well have been a conscious choice of the developers – it’s not like geese are exactly known for their elegance and grace – but this can nevertheless detract from the experience if you’re used to playing games with highly-responsive controls.

Beyond this, however, there’s little doubt that Untitled Goose Game offers a unique experience for the Nintendo Switch. The gameplay is honestly hilarious, while the animations and dynamic soundtrack combine to enhance the title’s eccentricity and charm. The attention to detail in the visuals also deserves a special mention; despite the minimalistic art style, the animations are beautifully expressive, helping to bring the world to life.

Although some may consider the price tag of £17.99 to be a little on the steep side for such a short game, the experience does stand out among the eShop’s other offerings. If you’re looking for a light-hearted, memorable title that will make you crack up laughing (and you can look past its handful of flaws), Untitled Goose Game should certainly be on your radar.

There’s something absolutely delightful about Untitled Goose Game’s harmless havoc. The game may be short, but it’s a memorable experience that’s worth a look if you’re in need of a good laugh.