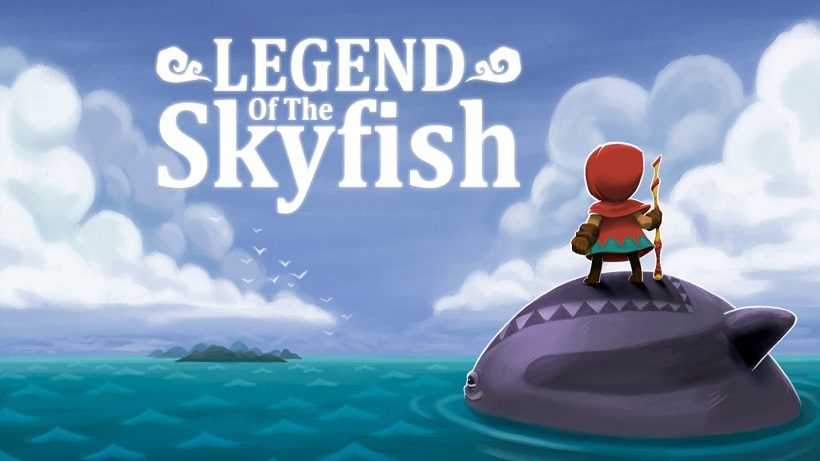 Legend of the Skyfish recently flew onto the Switch, and sports a beautiful high-contrast art style. Its characters and scenery are simple but adorable, and its music really makes you feel like you are out at sea while playing. While its initial charm is undeniable, sadly the game’s origins quickly become more than evident on the Switch.

Developed by Mgaia Studio, Legend of the Skyfish originally started out as a mobile game. From the analogue controls not feeling quite right, to the puzzles and battles not performing in a satisfying way, it becomes very clear that you are not playing the game in the way that it was originally designed to be played.

Your trusty fishing rod is your only weapon throughout the entire game. You use it to hook-shot to places, or drag items and enemies toward you in a very Link-like fashion. It’s hardly precise, however, and this quickly becomes frustrating. In many areas, you need to move fast, and with no auto-aim, it is an unpleasant tool to use. It also tends to drag items or enemies to unintended places, even dragging enemies past locked gates or onto unreachable areas.

Your search for your brother will take you through 45 levels, but that’s only if you can make it past the first set of islands. There are three sets of 15 islands with a boss at the end of each. As you journey through them you’ll solve puzzles, navigate traps and enemies, and find upgrades for your equipment.

Each of the island sets seem to have a theme: islands 1-15 feel like a very drawn-out tutorial, 16-30 focus on timed trials, and 31-45 see stronger enemies and more traps. Getting through the first 15 was the most frustrating part of the game, offering very little in the way of a challenge. It’s actually a relief to be met with timed trails in the next set of islands, though those quickly wear out their welcome as well.

Many of the islands and puzzles feel like padding, offering little variety, and just there to extend the game’s length. Having to backtrack several times in a row to reopen doors and trigger traps so you can destroy an enemy in order to progress is the most obvious example. Most of the game leaves you backtracking, or walking through unnecessarily long, winding paths. This becomes even more bothersome when you keep getting stuck if you hug the walls or land edges too closely.

What really left the game lacking, however, was the absence of any goals outside of your main objective; even the upgraded items were optional and mostly rather lacklustre or redundant. An upgraded rod went from freezing them for a short time to stunning an enemy temporarily. The only upgrades that were really helpful were the lure upgrades that boost its reach and speed, and the first cloak upgrade that extended your heart meter by one.

In lieu of any smaller goals to grant you small bursts of gratification for continuing on, it fell to the story to keep you interested. I looked forward to pushing through so I might be rewarded with more information about this world and its predicament, but alas, there was none to be had. You’re given the barest scraps of narrative only after each boss; which tell you nothing more than you still have a ways to go. Only after defeating the final boss are you shown anything significant; but even that’s bare-bones and anti-climactic, leaving you wondering what exactly even happened?

Legend of the Skyfish is a game with potential, but unclear direction. It lacks incentive, and its story feels like too small pieces of something more. There is some variety on offer between the islands, but a tedious drawn-out tutorial-esque start dampens the experience.