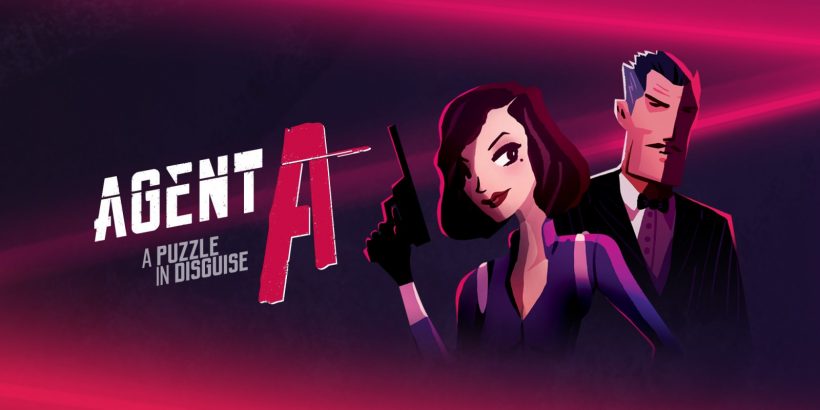 A point-and-click puzzler with a classic, espionage aesthetic, Agent A: A Puzzle in Disguise from Yak & Co. is the next mobile app to be given the console treatment. A cat and mouse game vs. the dastardly Ruby La Rouge, a rogue spy set on taking out all of your fellow MIA agents, it’s a game with a simple story – and one with a bland title, might I add – but one that’s worth checking out if you want to invoke your inner secret agent.

Assigned with the task of tracking down and thwarting this femme fatale Ruby La Rouge, you as Agent A fall right into her trap, finding yourself trapped in her impressive seaside home. You’ll have to finesse your way out through an almost comical amount of security measures in order to bring her to justice.

Backtracking throughout the house can be a bit monotonous towards the end of the game, but the fact that it’s all self-contained throughout the five chapters is oddly gratifying, and you’ll find yourself going back to rooms from previous chapters to discover things you’d glossed over before, or even finding secret passageways to new rooms entirely.  You’ll truly need a Goldeneye in order to succeed.

The puzzle design in Agent A feels consistently fresh throughout its five-chapter story, and each of Ruby’s security measures, intricately designed to foil your plans, feel tactile and satisfying to figure out. From analysing fingerprints on a keypad through a heat scan to see where is commonly pressed, to overturning furniture to find hidden compartments in the nooks and crannies, to taking hints from abstract modern art hanging on the walls, there are a range of different ways to test your brain. While none will leave you too stumped, you’ll feel like the next James Bond after putting the pieces together.

The port of the mobile version from developer Yak & Co. is largely seamless, although there was an issue I encountered where the audio would crackle during most of the cutscenes in-between chapters. Luckily, this is a minor hitch that doesn’t interrupt the flow of gameplay. Other than that, the music itself is the classic, spy motif stuff you’d expect, setting the mood nicely and increasing in intensity when new discoveries are made along the way.

Much like many other point-and-click games on consoles, Agent A is perfectly playable in docked mode, using the analogue sticks to direct your cursor. It’s another one of those games that suits handheld mode perfectly, too, perhaps even without the Joy-Cons and in a tablet format.

The touchscreen controls are translated extremely well, making full use of the Switch hardware, and they’re also really simplistic and easy to get to grips with, meaning that anyone with an interest in spy-based puzzles can get involved. Being a port of a mobile game, the touch controls are simple, leaving you to focus on the puzzles. That being said, it’s probably right at home on your phone, perhaps even more so than it is in the Switch’s handheld mode, and it’s also cheaper on mobile, too.

Ultimately, Agent A on Switch offers the best console version of the game you’re going to get, but your phone will and already has been doing the trick just as well, if not better. Still, it’s great fun to play spies while it lasts.

With its humorous spy theme and its satisfying, varied puzzles, Agent A is great fun. Admittedly, it’s currently cheaper and probably more at home on mobile, but it’s still a solid point-and-click addition to the Switch library.