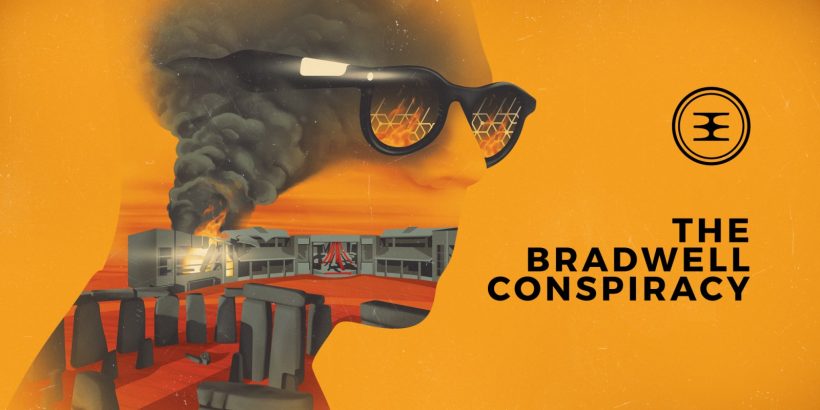 On paper, The Bradwell Conspiracy ticks all the boxes. Puzzle gameplay and a sinister narrative that will have you shamelessly donning a tinfoil hat are the main drawcards, and the title is brought to you by an impressive team of developers whose AAA credentials and BAFTA awards should give you confidence in anything they create. Despite their impressive resume, however, the game fails to provide the outstanding experience it claims to offer.

The game begins in the Bradwell Stonehenge Museum, where an explosion has caused you to become trapped inside alone. Well, almost alone. A piece of helpful wearable tech connects you with a scientist named Amber, whose guidance will be indispensable to you in your escape.

Of course, with a name like The Bradwell Conspiracy, you know that the game is going to focus on its narrative, and before long, you are indeed thrown into a story of lies and intrigue. The narrative touches on themes such as mass surveillance, terrorism, and right-versus-wrong; it’s the perfect recipe for a meaningful experience, and everything is accompanied by an eerie soundtrack and sinister atmosphere designed for suspense.

Nevertheless, The Bradwell Conspiracy is rather hit-and-miss. When it’s good, the story is engaging, offering an engrossing experience that will draw you in. On the other hand, though, it’s hard to ignore that the narrative fails to capture any credible nuance, particularly in its characterisation. Despite some clear attempts to provide depth to the NPCs, for example, the story stays firmly stuck in its good-versus-evil dichotomy, never quite managing to elicit anger at the well-intentioned but reckless vigilante, or sympathy for the grieving villain, which it is clearly aiming to do.

The Bradwell Conspiracy is also lacking the twists and turns that you might hope for in such a narrative, which makes the game’s single “aha!” moment stand out in its solitude. You keep hanging out for the next big reveal, but it never comes. Oddly, the game sets up plenty of groundwork and detail for a more intricate narrative, which makes it all the more surprising that nothing further occurs.

From a gameplay perspective, The Bradwell Conspiracy focuses on puzzles and problem-solving in order to progress. The main mechanism for this is manipulating a mysterious material called “Substance” and using it to complete various tasks, including unlocking cabinets, repairing broken utilities, or navigating uncrossable paths. Unfortunately, the mechanism is far from perfect, as problems with accuracy when placing the Substance in the game world make it awkward and frustrating to use.

Likewise, it’s frequently difficult to complete the puzzles, thanks to the poorly thought-out (and often inaccurate) UI and occasional unclear direction. The game is also plagued with minor technical issues such as glitchy visuals, dialogue triggering at the wrong time, and a frustrating enthusiasm for letting you out of bounds. Alongside some abysmal framerate issues, these problems rob the player of an experience with any sort of polish or finesse. The game runs, but it runs badly enough that it’s hard to look past the problems and truly appreciate the value underneath.

At the end of the day, you know there’s room for improvement when your reaction to seeing the credits roll is relief that the game is over. While there’s some value to be found in the narrative of The Bradwell Conspiracy, this doesn’t compensate for how frustrating the game is to play. Unless a patch is to come in the near future, you should probably be wary of this one.

The Bradwell Conspiracy had everything going for it but unfortunately fails to deliver. The narrative may be decent, but thanks to the awkward gameplay, technical issues, and frustrating user experience, it’s hard to recommend without some serious patching.