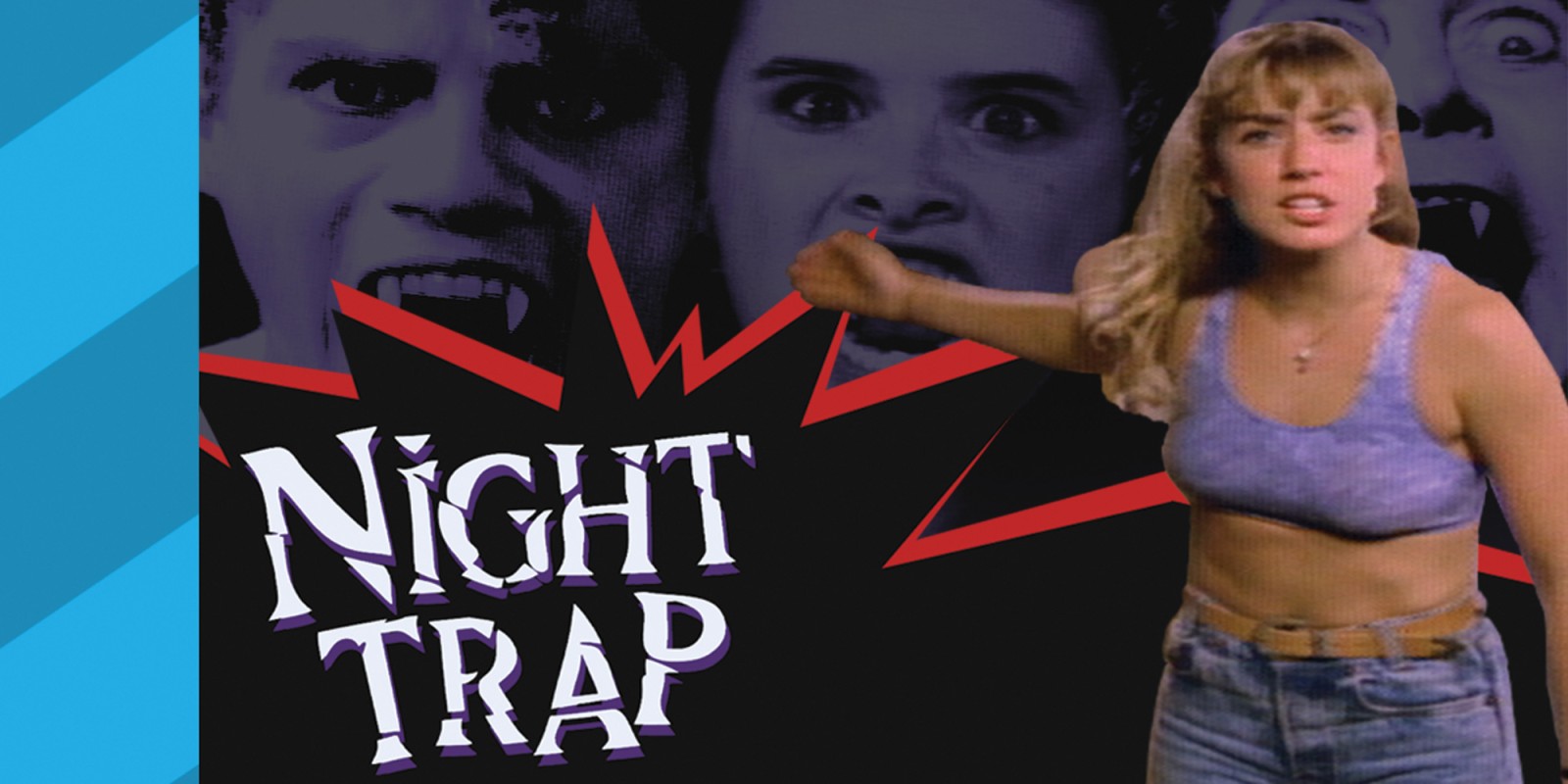 There was some 25 years between the former Nintendo of America President Howard Lincoln’s defiant proclamation that Night Trap would never see the light of day on a Nintendo system and the game’s release on the Switch courtesy of Limited Run Games last year. Lincoln was speaking about violent video games at the time, and with the likes of MadWorld, Outlast, Assassin’s Creed and more having taken up residence on Nintendo consoles in the meantime, those who weren’t around to see his speech at the time will have a tough time figuring what the big deal was.

Night Trap is a pretty much unique idea for a game – a full-motion video game where you survey the action through eight different CCTV cameras. Flicking from room to room, you must activate traps to catch Augers, who are villainous characters trying to kidnap a group of kids spending the night within the house. When seeing one of the Augers appear in one of the rooms, you must hit a button to activate a trap door or a swivel-wall to take them out.

That may sound pretty easy, but that’s far from the truth. The correct moment to hit the button is literally a split-second, and in rare occasions the red indicator which shows the precise moment will actually be a red herring which kills one of the kids and results in an immediate game over. It’s harsh and it’s punishing, which seems to be a recurring theme of this otherwise simplistic-seeming game. There are loads of set-pieces, and most will be blink-and-you-miss-it affairs, which even as you cycle through all of the CCTV cameras you still might even notice took place. All of these happen at exactly the same timestamp on the playthrough each time, so you can imagine people scribbling the precise seconds down with pencil and paper back then.

It’s difficult to see how people might complete this nowadays though without simply searching for all the timestamps on the internet. Still, you might still miss them, as while you might get minute-long lulls with no action to take care of, there may be two instances in different rooms in the space of five seconds at other times. You also need to figure out that the colour-coded button for setting the traps is changed from time to time, and you need to witness the characters saying the new colour in secret.

There’s about an hour and a half of full-motion video included in Night Trap, but it’s not simply a case of following the story from start to finish. The game keeps track of how many villains you could potentially have caught, as well as the number that you actually did, and letting that second figure fall too far behind the first will result in the SCAT team you’re representing relieving you of your duties and forcing you to start over. Though, if you did just want to watch the story, the Collector’s Edition of the game allows you to do just that – except to be in keeping with the early 90s, it’s presented on a VHS cassette. Collecting Nintendo Switch games can be weird, sometimes.

Watching the video all the way through is presumably the reward of the game, but doing so in one sitting is impossible. You need to play over and over again in order to get the full enjoyment, and that’s where the excitement wanes. But today, Night Trap is a museum piece – this would be welcome on Switch for its historical significance if nothing else.

Night Trap is no masterpiece. As a game, it’s not wonderful – its plot is nigh-on impossible to follow and you have to replay the game over and over until you figure out what to do. However, you need to play it because of its historical significance.