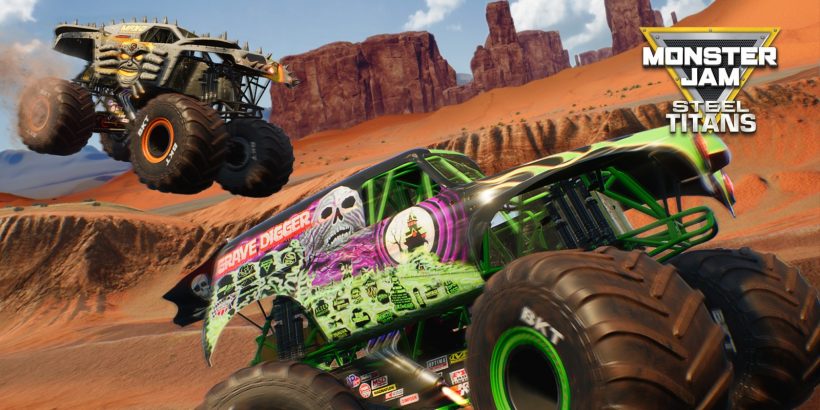 Monster trucks and demolition derbies might be the most American form of racing in the world. They could easily be described as the WWE of the racing genre, featuring boisterously designed trucks with the biggest tires on the planet, racing, and tricks done to the screams and cheers of thousands of fans. As one of those niche slices of the market it was a pleasant surprise to have enjoyed Monster Jam Steel Titans as much as I did, even if the vehicle’s physics are quite wonky, and open world portions are empty and boring.

Monster Jam Steel Titans features some of the world’s most popular trucks, from El Toro Loco and Blue Thunder, all the way to the pièce de résistance — Grave Digger. Looking as realistic as possible, with smashable bodies that fall off and tires that can get damaged, this is one of the better ways to play around with these giant motorised toys. As long as you aren’t looking for the most competent of racers and just want to smash trucks and take big jumps, then you can safely proceed with this purchase.

Even with that being said, the racing isn’t all that bad. My biggest complaint with it comes in the off-roading sections, where the physics go off the wall. Driving around on the roads or trails offers a serviceable experience, but running into a tree or hitting a bump a little too fast will totally derail your progress, most likely causing you a restart if you want any sort of decent placement. Controlling your mega machine makes manoeuvring properly through these portions super difficult, as they don’t handle exactly like you would expect with a tight turn radius and fast acceleration.

Due to these issues with the physics, the arena sections where you are going for trick combos are a little bit of a crapshoot. I spent most of my time in these areas just hoping for the best, as I went flying and spinning from combo to combo. But like I mentioned, as long as you aren’t taking things too seriously, it’s fun to just go crazy.

Through the career mode and new game plus offerings in Steel Titans, you can play through several distinct types of competitions, at different venues that bring forth enough of a change that you will always have something somewhat new, even if you are just going through the same motions. The open world sections where you can grab collectables and fool around get boring quite quickly, with a small area to play in, but again, as long as you can hold onto the novelty you will continue to smash and crawl your way through this one to an alright time.

Monster Jam Steel Titans isn’t going to wow you with its racing, and the more distinct offerings that you could only get from a monster truck game are hampered by rough physics as your trucks goes flipping out of control from the slightest contact. And yet, I enjoyed myself. The novelty of messing around with these trucks didn’t subside as I went from races to arena matchups, each of which is fine as long as you do your best to avoid what causes these physics issues. Acquiring the license to get the real-life monster trucks in this lineup was a definite bonus as well. All in all, this will be perfect for anyone who just wants to control some trucks, and a play area to mess around in.

Monster Jam Steel Titans is a competent racing title with some fun stunt sections, although it’s hampered by an extremely touchy physics system, and barren open world areas. Still, I felt like a kid playing with toys, which was enjoyable.