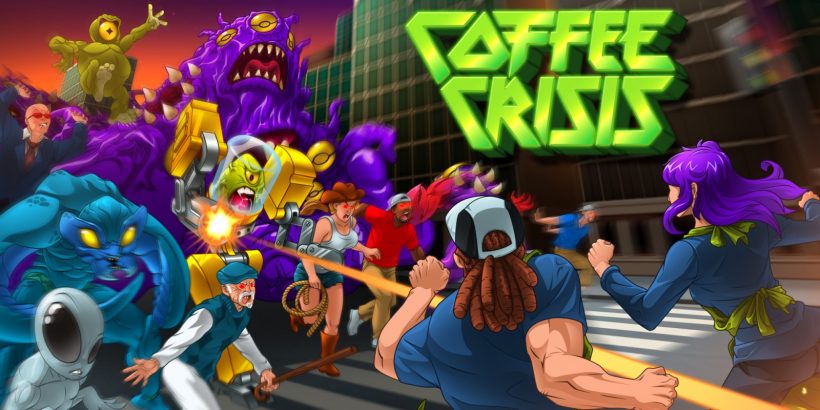 Even though I’m not an 80s or even a 90s kid, I’ve always appreciated classic beat ‘em up titles like Streets of Rage and Double Dragon. Much like frosted tips and pogs, however, the beat ’em up genre didn’t continue its success in the new millennium. Coffee Crisis is the latest game trying to revitalise the genre, and I think it does an admirable job.

Coffee Crisis follows two baristas, Nick and Ashley, who close their coffee house early to go defend the earth from Smurglians, an alien species invading the earth. Gone are the traditional alien invasion tropes of harvesting our water, oxygen, or body parts, as the Smurglians are instead intent on stealing our WiFi, coffee, and heavy metal music- you know, things we actually rely on. The plot itself isn’t the most compelling, but some rather humorous scenarios and one-liners do add more substance.

As you’d expect from a beat ‘em up, gameplay consists of defeating every character that comes your way, including a plethora of different aliens, possessed cowboys, and old people. Your main method of attack to swing your trusty bag of coffee beans at any fool in your path, as well as grabbing aliens and throwing them back towards your enemies like some twisted version of dodgeball. Co-op play is encouraged as only one Joy-Con is needed, making for a more arcade-like feel to the gameplay.

This isn’t where the arcade similarities stop, either. Coffee Crisis is, at its core, a love letter to classic video games. Stages and characters are nostalgic and loaded with Easter eggs. The 16-bit graphics translate perfectly on to the Switch, but if this is still too modern for you, modifiers can temporarily apply CRT filters that will have you reminiscing about static and screen flicker for hours. Not all the included throwbacks stood the test of time, however. The inclusion of mandatory passwords to play each level is a novel inclusion but soon becomes frustrating once you need to input it every time you run out of lives (which is a lot).

Given the Smurglians’ obsession with heavy metal music, this features rather prominently in the soundtrack. Heavy metal isn’t my cup of tea, but the frenzy of relentlessly spamming attacks whilst hordes of aliens surround you matches perfectly with the aggressive music which seems in sync with what happens onscreen. It’s not just the heavy metal that Coffee Crisis gets right, either. Even the music on the pause menu is on point, using elevator music to give you a rest from the overall hectic nature of the game.

Coffee Crisis’s caffeine will be just one aspect that will get your heart racing. Whilst the game itself is short, the intensity makes for quite a challenging task on the harder difficulties. Random game modifiers are applied to certain sections of the level, which can either grant you buffs or hinder your progress by boosting enemy stats. Unfortunately, boss stages are underwhelming compared to the rest of the game, as most of the challenge in Coffee Crisis comes from the sheer amount of attackers intent on destroying you rather than a sole enemy.

Overall, with its humour, high-intensity gameplay and homages to classic video games, there’s a latte [Dear me – Ed.] Coffee Crisis has to offer. Perhaps it’s time we brought back beat ‘em up games.

Coffee Crisis is an excellent take on the beat ’em up genre overflowing with 80s and 90s nostalgia and heavy metal, although it is a shorter experience than we would have liked. The humour and personality spill through to the point you’ll remember this one months down the line.