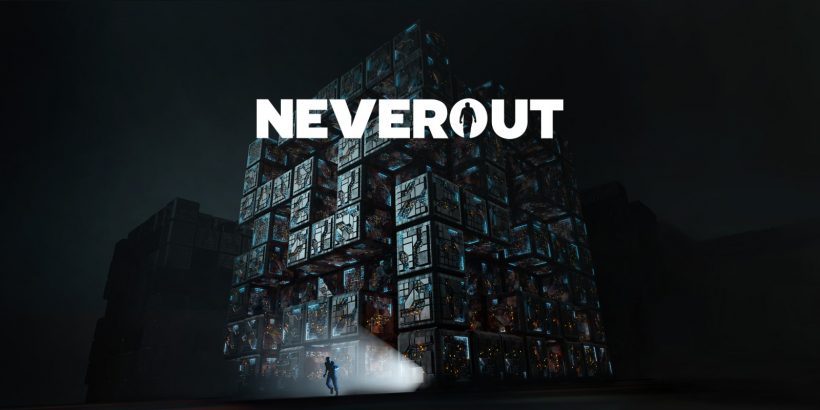 Classics like Portal define the standard of excellence for first-person puzzlers. For better or worse, once you’ve played either of the two main games in that franchise, it will be hard to approach other titles in the same genre without some degree of comparison creeping in. With grimy, oppressive spaces, unforgiving traps, and perspective-twisting puzzle gameplay, Neverout does little to discourage the comparison, but ultimately fails to hold its own against the greats.

Neverout begins in a dark, claustrophobic room. There’s a sense that there should be some story here – you can hear muffled voices which quickly fall to silence. Have you been kidnapped? Are you a prisoner? Who are you, and why are you here? Intriguing as these questions are, they are quickly superseded by your more immediate concern of how to escape.

The game’s central mechanic is the ability to rotate the direction of gravity by walking onto walls, which will allow you to find and access the trapdoors that link Neverout’s levels together. As you progress through the game, a handful of new obstacles are introduced, including spikes, warps, sliding metal boxes, and powerful magnets. With the exception of two or three more diabolical (and enjoyable) levels, the puzzles themselves are rather bland. Most don’t offer much of a challenge, and I frequently spent less time identifying the path I needed to take to reach the exit than I did walking myself there, turning what could have been an engaging puzzle experience into a drawn-out stroll.

The game’s structure is also distinctly odd, taking the form of a short-ish tutorial that introduces all of the key mechanics before landing you in a central hub. From here, there are a further four areas that you can access, but this isn’t communicated well; signage exists but it’s somewhat unintuitive, and because the new areas recycle the same assets as used in the tutorial, little stands out to indicate that these are, in fact, new levels. It’s poorly designed, confusing, and does nothing to redeem the overall experience.

There’s minimal incentive to continue playing the game, either. Not only is there no real reward for completing the puzzles, but what originally felt like a story waiting to happen just doesn’t get expanded. The game’s name points toward this as some sort of nihilistic metaphor, but there’s not even enough narrative substance to really support this interpretation. The ending is anticlimactic, too; needless to say, it doesn’t make seeing the game through to completion feel worth it.

The controls themselves also leave something to be desired. Neverout is played in first-person perspective, but you can only move along tiles in the four cardinal directions. This may not sound like a problem, but it’s easy to end up moving in the wrong direction (sometimes to move into a trap and meet an untimely end) if your camera view is set on too much of an angle. Perhaps this is a hangover from the game’s VR roots, but it translates poorly to the Switch and is rather difficult to get used to.

What can be said about Neverout is that while it makes the Switch work hard, it runs well with no technical issues. Beyond this and the handful of memorably challenging levels, however, the game is unlikely to stand the test of time as a worthy rival to the first-person puzzlers that have truly defined the genre.

With its eerie atmosphere and interesting mechanics, Neverout has potential, but it doesn’t do enough to deliver. If you happen to be in the market for a good first-person puzzler, you’ll probably want to steer clear.