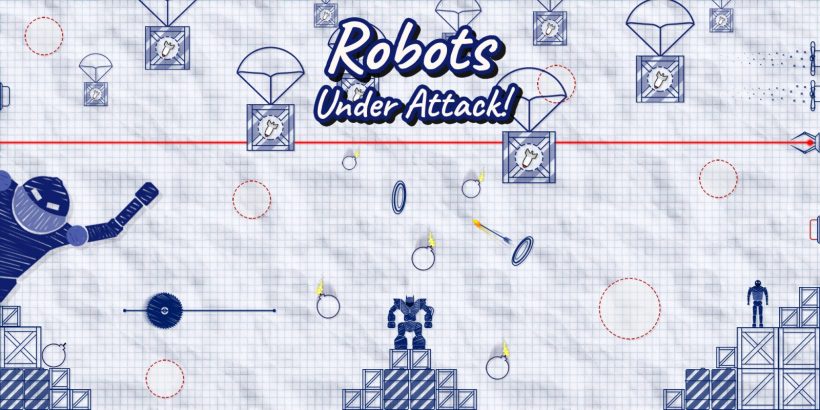 Self-made and published games are hard to come by in this day and age. Robots under attack! is one such example, with Dmytro Derybas independently creating an arcade puzzler that offers up 100 levels of robot-destroying action on the Nintendo Switch, all for the price of a car wash.

With a series of short missions focused around the same goal, Robots under attack! is an easy one to pick up and play. Your task is simple: use the finite supply of arrows you have for your bow to destroy the robots in each level. This becomes all the more challenging when you begin to encounter portals, bombs, lasers, sawblades and wrecking balls. It’s an eclectic mix of obstacles to overcome, but it works. Each level proves to be more thought-provoking than the last – with the exception of levels where a new element is introduced as these feel designed to educate rather than to challenge.

There are a number of considerations to be made when starting a new level, namely in which order you use the arrows. It is evident that the levels have been crafted in a way that means there are a limited number of possible solutions. Identifying that shooting a fire arrow at that barrel before using a heavy arrow to hit the switch is part of the challenge, and many a time you will be hitting X to reset the level back to the beginning again.

Prevalent among many puzzlers is the element of trial and error, and Robots under attack! is no different. While there are some levels that require skill, there are others where the desire to just shoot and see what happens is too overwhelming to ignore. This is an excellent way for players to learn more about each level, however it could well become tiresome for those looking for a quick spot of puzzling action. Once a rhythm is found, Robots under attack! can be completed in a couple of hours and it is good fun whilst it lasts.

Evidently made with the Switch in mind, Robots under attack! makes full use of the motion sensors to provide gyroscopic aiming while docked, or touch screen controls in handheld mode. It is intuitive and inviting to play in either mode and is a testament to the work of the developer himself — it is difficult to choose between the two.

Not only is Robots under attack! well suited to the Switch’s hardware, it is also aesthetically pleasing too. It is simple and unassuming, providing the perfect backdrop for the puzzles to take centre stage. The in-game menu is also just right, with the ability to hide the toolbar across the top an excellent design decision. Switching between arrows is done with the simple tap of R and L, and aiming and shooting the arrow is done either by holding A and letting go or by pulling back on the bow using the touch screen.

With linearity to the solutions and a relatively short lifespan, Robots under attack! is an entry-level puzzler that is great for short bursts of play and a fun time. It would have been excellent to see it developed further with the option of a ‘make your own’ section or multiple solutions to the problems, but all in all, it is a great addition to any Switch library at the fraction of the cost of other titles on the system.

Robots under attack! doesn’t overstay its welcome, nor does it leave you wanting more. It’s a solid effort that will benefit from its cheap pricing and should hopefully be the springboard for future releases by Dmytro Derybas.