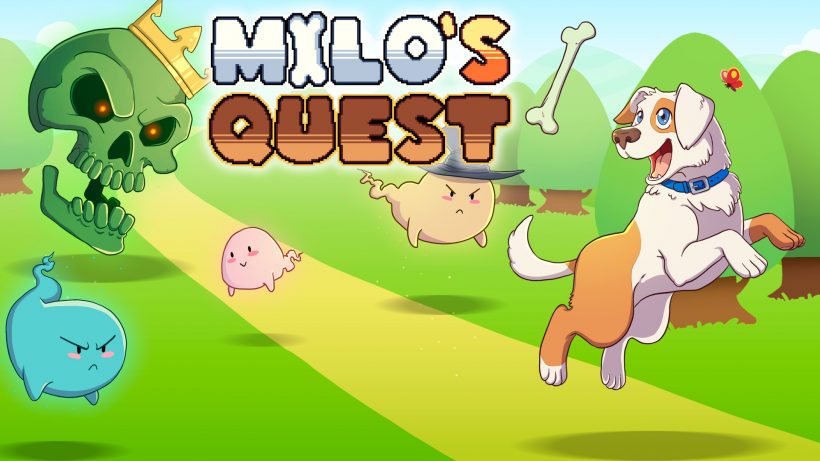 Milo’s Quest is the sequel to Super Box Land Demake, a box-pushing puzzler which we reviewed last year. That game was good-looking but, sadly, didn’t quite hit the mark in terms of puzzle design. Indie developer Juliano Lima has tried to rectify that here, but not necessarily in the way you might expect.

This time around, you’re in control of Milo, a lovely little puppy trying to stop a curse involving bones and … well, that’s about it in terms of plot. I don’t much mind this myself, though; if there’s any genre of game that can survive a weak or nonexistent storyline, it’s got to be the puzzler.

The core puzzle mechanic in Milo’s Quest is a tried-and-tested one: push blocks onto corresponding pressure pads, making sure each one is covered in order to open a door to the next room. The challenge is to push the blocks about without getting them stuck in a position where they can no longer be moved — a corner, for example. It’s a classic game style which ultimately descends from 80s classic Sokoban.

Visually, Milo’s Quest is strongly reminiscent of Super Box Land Demake, which is no bad thing. It’s a retro cartoon pixel art style that works well with the simplistic nature of the puzzling, and the music — although it can grate after a while — is equally suited.

However, a surprising twist comes in the form of combat, and it’s here that the game differentiates itself. Each room typically contains a puzzle and a number of ghostly enemies which mainly deal contact damage. Early on, Milo gains a dash ability which destroys enemies in two hits. Mixing up the puzzling with combat is a great touch, and it was good to see the game vary the rewards for completing the tasks in each room: sometimes puzzle completion will open a door, sometimes a chest, and so on, and vice versa for defeating all the enemies present.

Unfortunately, though, neither the combat nor the puzzling is really up to scratch. Since adversaries don’t stun or recoil when hit, battling enemies starts off awkwardly. You’ll need to be really careful to time your attacks just right in order to avoid taking damage. However, once this is mastered, combat quickly becomes a pedestrian affair. There are only four enemy variants and none of them are particularly difficult at all.

Likewise, the box puzzles are sadly uninspired, as they lack both variety and a meaningful level of challenge. Whilst Super Box Land Demake at least ramped up the difficulty now and again, Milo’s Quest simply stays in first gear, with the majority of puzzles requiring almost no thought whatsoever. I’m not exaggerating when I say that I approached 90% of the puzzles by starting on them immediately and completing them on autopilot, with very little real thought or planning involved at all.

The game’s three bosses at least provide something slightly different, but they’re all a straightforward case of ‘avoid, then dash’ using the one attack available. As a result, the game is a short one: two or three hours and you’re done, even if you’re a completionist.

It’s possible this release is aimed squarely at very young children, but surely such an audience deserves more storyline and characterisation than what’s on offer here. There’s just not enough variety or challenge in this game to keep anyone entertained for long.

The ideas here have potential, but it’s potential that isn’t realised. With more polished puzzles or additional core mechanics, the game might have lived up to its initial promise, but as it is, Milo’s Quest is more like Milo’s Distraction.