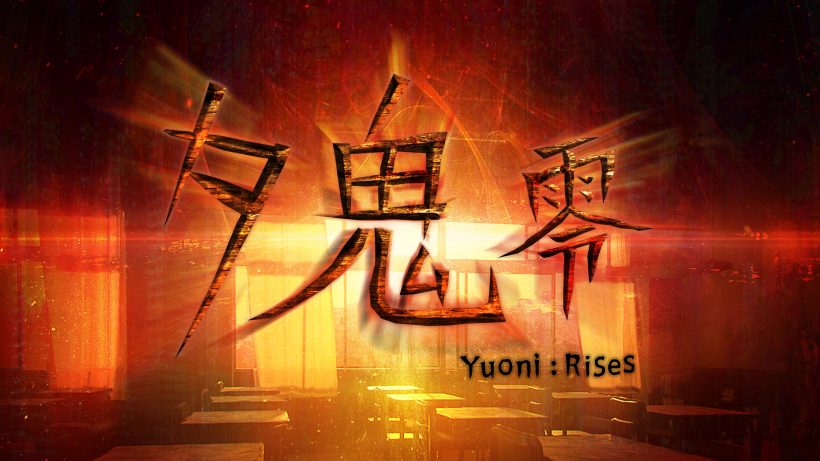 Not since elementary school have I felt so safe just staring down at my desk. “Keep your head down and your nose clean.” Weren’t those the words of wisdom touted by our fathers and forefathers?

Turns out, no matter how much you keep your head down, or how much you scrub your nose… you are not going to be overlooked by the Tsun. Not in Yuoni: Rises.

This visual novel experience simply sits you down in a Japanese classroom at a time that is neither day or night: perhaps dusk, twilight, the witching hour. Whatever you call it, you are plunked down in this desk, and begin reading and looking through the sketchbook that sits atop it. This sketchbook will take you through a chilling, atmospheric story about a small group of young Japanese children experiencing a few run-ins with some urban legends.

I lived in Japan for a few years, and I can say with all honesty that the country has that really-old, probably-haunted, feel. Don’t get me wrong, I never felt unsafe, ever, while I lived there (not that kind of unsafe you might feel walking around the backstreets of a big city). Rather, I would just sometimes have this feeling of peaceful-uneasiness. Their ghost stories and urban legends are old, and usually pretty darn creepy. Yuoni: Rises lets you live that urban legend run-in you may have always wanted to have, succeeding as this game is creepy.

First of all, it’s worth noting that this game was originally made for VR. So how this translates on the Switch is that – in handheld mode – you can swivel your Switch around and that allows you to look around the classroom.

In terms of controls, press A to move the text forward, hold A to see the previous page and hold both Z triggers and A to return to the main menu; that’s it. So there won’t be any using the joystick to move your character around. You are glued to that little desk chair and all you can do is read on, further into this spooky story of madness, and if you’re brave you can also swivel your Switch about to look around. I was not brave.

When you are looking at your desk, your Switch kind of “locks” on to it. So minute movements aren’t going to take you out of the sketchbook. You have to make a pretty big, bold movement to lift your head from your desk.

UNLESS… AHH! Something spooky happening! There are certain parts in the story where all of a sudden the game FORCES your face out of the safety of your desk! “WHYFORE?!” I cried, uselessly.

I found myself scrambling around being like, “NO NO, let me look back down again where it’s safe!” But something terrifying always, inevitably, happens. Creepy little outlines of children will run around, hands will try to grab you…

I think it’s a very nice, slow-burn, kind of scare. To explain that better: the story is slow and introduces your characters and setting, and then things slowly start getting really weird… Then BAM! A spooky thing happens.

All in all, it is a visual novel. The story is chilling, and the little extra spice of the faux VR aspects happening around you is a nice touch. If you like scary stories, reading them, and Japanese urban legends, then consider this one for your library.

Despite delivering a good story with nice sounds and effects, Yuoni: Rises’ faux VR aspect is likely a lot more effective with a VR headset, and doesn’t translate all that well to the Switch. It’s worth it if you love Japanese urban legends, though.