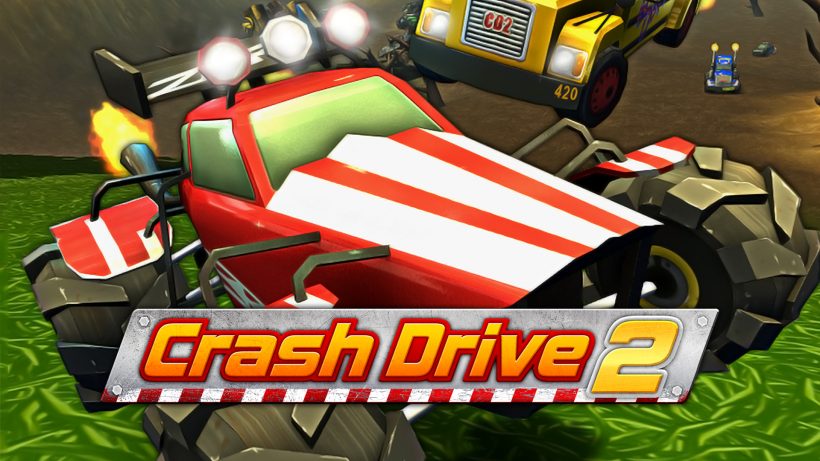 It has been over twenty years since the iconic Tony Hawk’s Pro Skater took the gaming sphere by storm, giving rise to a new genre focused on stunts, tricks, and flips. Crash Drive 2, albeit using slightly larger modes of transport than a skateboard, does well to replicate the incessant fun of landing a 180-flip combo, but ultimately crashes down in a Switch port that fails to capitalise on its potential.

Much like Tony Hawk titles, Crash Drive 2 revolves around building up combos and high scores through consecutive tricks, flips, and drifts. This can be done by exploring the open map and stunting off certain objects to reach difficult-to-find spots. To unlock new areas, you need to fully explore the map, accumulate many points, and beat other players a set number of times in online races, games of tag, and coin battles. Crash Drive 2’s stunt-based system was much more fun than I expected it to be, for it is incredibly satisfying to land a complex trick that pushes you to the top of the online leaderboard over countless mobile players.

One of Crash Drive 2’s strongest area is its tight controls, which are key for any gameplay focused on intricate tricks. Timing jumps, drifts, and turns are made easy by these responsive controls, although the fixed camera angle brought over from the mobile version does negate the possibility for even better tricks.

Unlocking most of the new areas does not feel rewarding enough, however, as there is not enough variety between the ramps and loops in each area. Crash Drive 2’s maps also suffer from a common problem faced by older iOS/Android ports in that its graphics and textures look fairly outdated for a modern console game. The textures found in the Forest level, for example, were especially disappointing, For such large maps and a focus on carnage, hence the name Crash Drive 2 felt pretty empty in its sparsely populated lobbies. It was only when I unlocked the final map that introduced a tank battle mode that Crash Drive 2’s progression felt worth it, for it adds a new dynamic away from tricks and flips, although I fear many players will give up on Crash Drive 2 prior to unlocking this mode.

Given that Crash Drive 2 is a free title on mobile, you would likely feel hard-done-by if you had to pay £7.19 for the same experience and an extra bit of cash available from the start. These free-to-play elements also come through in having to grind for new and exciting cars, in which you need to max out an unfair number of other cars before even having the opportunity to purchase them, unless, of course, you pay to max out these cars using in-game cash (which is also available through micro-transactions). Whilst this type of gameplay has its place, it feels better suited to function as a mobile game, where sporadic play is encouraged more than on the Switch where grinding still feels tedious.

Overall, Crash Drive 2 is fun to play for short bursts, which ultimately leads to its own demise as I can see most players giving up before unlocking the tank battle mode. As Crash Drive 2 is now a seven-year-old mobile title only just coming to the Switch, it is let down by some clunky graphics and questionable design choices that may see Switch owners hitting the breaks on this title.

Mobile games often struggle when ported over to other consoles. Although there are hints of fun in Crash Drive 2, its now seven-year-old graphics make the maps look bare and outdated compared to more recent car-related titles.