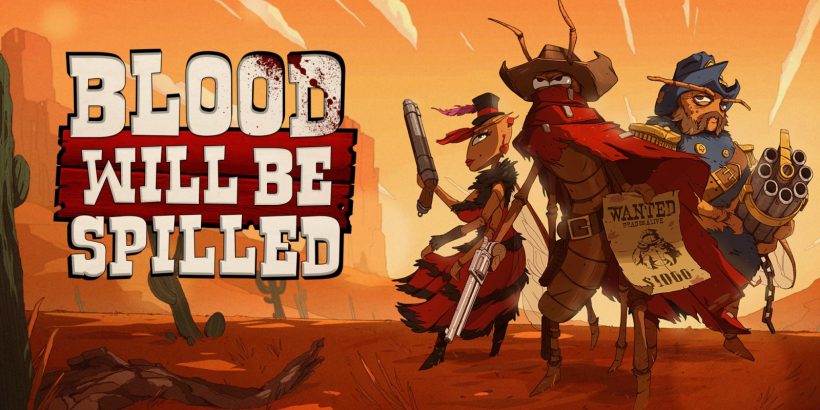 It’s hard to talk about Blood will be Spilled without mentioning the game that so clearly inspired it: SteamWorld Heist. Not that this is a bad thing. After all, there aren’t nearly enough tactical games that take place along a 2D plane, let alone those with lashings of charm and a strong sense of heart. However, whereas Image and Form’s take suitably worked to evolve the genre while slotting neatly into the SteamWorld universe, Blood Will be Spilled makes turn-based tactics its centrepiece and mixes in platforming and exploration elements. The result is a game that’s less pure, but still extremely enjoyable.

Blood Will be Spilled sees you play as part-time bounty hunter, all-around mosquito badass Jack. Voiced by the same actor who plays Deus Ex’s Adam Jenson, Elias Toufexis, there’s nothing particularly unique about his character, but his noticeably gruff tone and no-crap attitude does well to hammer home the spaghetti western stereotypes this game revels in. The only major difference here is that the world is entirely inhabited by insect creatures, including outlaws that you must meticulously hunt down.

As mentioned, doing this involves a lot of light platforming. You’ll need to gather collectibles and generally just worktowards unlocking better upgrades and guns so that Jack is well equipped when the time comes to do battle. These tactical gun fights are the beating heart of Blood Will be Spilled, and it’s here where the action freezes to play out in beautiful turn-based tactical fashion. Much like SteamWorld Heist, Jack can move, shoot, and use cover to gain the advantage over foes. The latter is arguably the most crucial factor, letting you defend against shots as you battle several enemy types. Performing an action, however, uses is up one of two action points you’re afforded. So you have to use them wisely.

How Blood will be Spilled differs from Heist is in Jack’s ability to suck out the blood from enemies and use it to power several of his special skills. Said abilities are determined by which skill tree path you pick at the start (The Good, The Bad, or The Ugly), which actually offers a lot of replay value to this six to eight-hour long campaign. You also must be wary of reloading and your health in addition to moving and firing. All these movements will use up one of Jack’s precious action points, so it pays to plan wisely. Gunfight battles start off relatively simply but grow more complex as boss battles are introduced and new weapons are made available.

The turn-based combat works perfectly fine overall, but it is a little lacklustre when compared to the action of its spiritual predecessor. For instance, whereas in Heist time would satisfyingly slow upon a good enemy hit, in Blood will be Spilled character deaths and animations in general are far more functional. The hand-drawn art style and cutscene animatics are similarly very charming but suffer can come across as a little bland. These elements, combined with imprecise platforming, make Blood will be Spilled quite literally feel like a Jack of all trades, as opposed to SteamWorld Heist’s “master of one” approach.

Even still, these are minor nit-picks considering what Attu Games has managed to achieve as just a two-person team. Blood Will be Spilled is a far more successful experiment than the great-looking but wildly frustrating Feudal Alloy, serving as another good entry into the niche 2D tactics genre.

Blood will be Spilled attempts to make some slight tweaks to the 2D strategy formula first laid down by 2015’s SteamWorld Heist, but lack of polish and elements from other genres slightly muddle this (still fun) take on the concept.