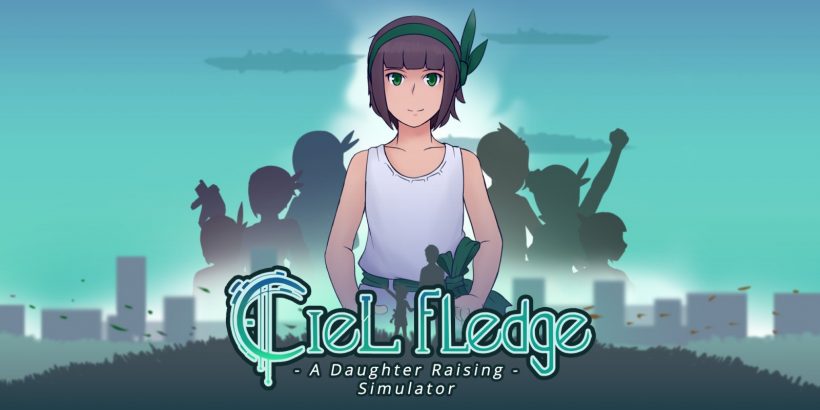 Parenting is one of the most difficult jobs on the planet – that’s a fact.

But not so, it seems, in Ciel Fledge: A Daughter Raising Simulator  – a Kickstarter indie game where the road to a bright future is paved with… schedule management. The setting is much less mundane, though: centuries in the future, humanity lives on spaceships called Arks after Earth was devastated by the enigmatic “Gigant.” The threat still looms, so when 10-year-old Ciel is dropped into your lap as a refugee from a recent disaster on Ark 5, it’s your goal to ensure that over the next decade, she becomes a well-rounded young lady – not just in the classroom, but on the battlefield.

The meat of the game is managing Ciel’s scheduled activities in your apartment while she awkwardly awaits orders. Each activity will affect her Strength, Intelligence, Charm, Imagination, or Spirituality; gaining points in those traits will award her abilities and stat boosts. Activities take up stamina, which can be recovered through resting, socialising, or eating a snack. Before choosing Ciel’s weekly activities, though, you’ll pick how much to feed her, and how to spend your own time.

If you spoil her, she’ll be happy, but less disciplined; if you work overtime, she’ll lose affection, but you’ll make great cash – which is really hard to come by in this game. Clothes and snacks for Ciel are not cheap. Affection is difficult to raise as well, especially while managing her constantly-dipping stress level and mood – so this planning stage is all about strategy and balance. The action hasn’t even begun, but you’ll spend much of the game in these menus, planning every week of her life for ten years.

When you’re satisfied, press + and watch Ciel buzz through her week. It plays out automatically, with cut-scenes and battle encounters sprinkled in. (It can thankfully be sped up.) Encounters all play out similarly: Ciel has a deck of 52 coloured cards, which need to be matched up in threes. In combat, matches play out as attacks, which can be strung together for combos. Non-combat encounters (like tests, swimming laps, or doing housework) may have you string together several matches of one colour, or as many as possible in the time limit. The touch controls are very useful here, as battles are time-based, and it’s easy to accidentally pick the wrong card using the joystick or D-pad. Special abilities and allies can also be called upon to help your daughter deal massive damage. Eventually, Ciel and her friends can also explore Earth’s surface in a field trip – a welcome distraction from the daily grind on the Ark, as this game takes well over a dozen hours to complete.

Cut-scenes play out like visual novels. Although we’re listening to repetitive music and the occasional voiced sigh or squeal, the dialogue itself sparkles with personality, only suffering from a few grammatical errors. While character portraits are well-drawn, people enter and exit by sliding in from the sides as if they were animated in PowerPoint. It’s more jarring than a simple fade-in, and makes for a lot of awkward beats in conversation.

From the get-go, there is intrigue about Ciel’s past – she has amnesia, and doesn’t appear to be an ordinary little girl. That curiosity alone, though, might not be enough to carry players through to the end of a game that demands so much time – and is pretty rough around the edges, to boot.

It’s difficult to overlook the Ciel Fledge’s tedium and awkward pacing, but the game is a micro-manager’s dream, offering plenty of longevity to those who stick around long enough to raise their daughter to adulthood.