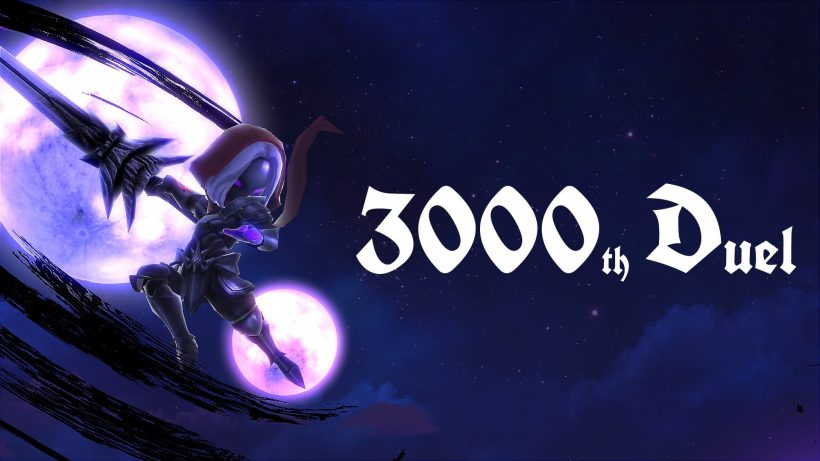 On the surface, this quaint little action adventure doesn’t look to be anything particularly special.

Maybe it’s the over-reliance on Souls-style mechanics, a ho-hum art style, poor communication on how progression works early on, or a mixture of all three. Luckily, 3,000th Duel does get better the more it goes on, eventually finding its quick-paced groove and expanding to set you off on a deeply atmospheric descent into the unfamiliar. Games of this ilk might be stacked on the Switch eShop right now, but 3,000th Duel does just about enough right to warrant a look.

Set within a mysterious fantasy setting filled with horrific nightmare creatures, players that value a conventional narrative aren’t likely to find what they’re looking for here. 3,000th Duel instead opts to keep your protagonist’s identity and their purpose in this world close to its chest until much later on, simply asking you to progress through its varied, labyrinthine map seemingly for nothing else other than pure curiosity. Of course, this isn’t new for the genre, but even titles like Hollow Knight and Dead Cells lure you into their universes relatively quickly thanks to great environmental design.

It doesn’t look like 3,000th Duel will be able match up to this at first, mainly because the initial locales you explore seem to fall into the standard set of fantasy tropes: caves, castles, dungeons and so on. Eventually, though, the map substantially reveals itself, and you forgive the game’s generic visual aesthetic – something that’s made easier again thanks to a fast style of combat that’s satisfying to pull off and wildly customisable.

While it’s mainly the Y button you use to constantly mash enemies, 3,000th Duel features a wide suite of weapons and magic abilities that all function differently. You begin with a standard sword ideal for fast hits and swift movement, before getting to grips with lances, broadswords and more. You quickly find that there’s always a weapon perfectly geared to exploit the weakness of 3,000th Duel’s vast catalogue of enemies – it adds an extra degree of strategy. The same is true for magic attacks (named Occult abilities), but as previously mentioned, learning how each operate and how to best utilise them isn’t well communicated initially.

3,000th Duel does suffer from being very menu-intense at times, as you’re able to do everything from equipping your character with accessories that effect your stats, the aforementioned Occult abilities, and that’s on top of an in-game skill tree. As such, this game can feel a little like its worst enemy at times, though things eventually settle when you realise that 3,000th Duel is yet another 2D souls-like with Metroidvania elements – albeit a rather good one.

A nice touch in this Nintendo Switch version is in how your Joy-Con’s HD rumble will satisfyingly vibrate upon landing a hit. Feedback like this really makes you feel like you’re doing damage in 3,000th Duel, whether it’s in relation to some skeletal grunts or that next big, end area boss, of which there are many. Fights never get too challenging provided you’re levelled up and well-equipped but sprinkling in more ways to reclaim health would have been nice.

As you can probably tell, 3,000th Duel is the type of 2D action adventure that isn’t without its issues. However, once you get past its mechanical quirks and safe art style, it serves as a thoroughly enjoyable – though not particularly original – jaunt into the mysterious unknown.

3,000th Duel doesn’t do a lot new for the Souls-like Metroidvania hybrid genre, but its satisfying combat and various customisation options make for an enjoyable experience which makes up for a lot of its familiarity.