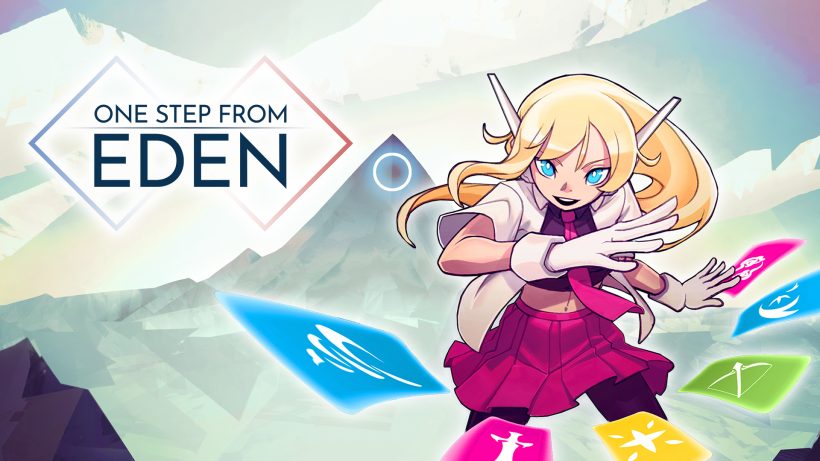 One Step From Eden is a strategic deck-building and real-time strategy game with rogue-like elements that clearly takes inspiration from the likes of Slay the Spire and the Mega Man Battle Network series — minus the exploration. Choose your path, create your deck and make your way to Eden. But is it worth it?

One Step From Eden features an extremely light story, but it’s a story none-the-less. Set in a desolate future world, the only hope of survival is getting to the city of Eden. What this city actually is, is unclear but it’s believed to be this bleak worlds saviour. Choose from one of nine characters (of which you will get a very brief back story) and set off on this deadly adventure to Eden.

Each run in One Step From Eden is completely different from the last with branching paths to choose from, randomly generated battles and over 200 ‘cards’ to customise your deck with. Upon choosing your character — of which only one will be available from the start, Saffron — you will be thrown into your first battle, equipped with a basic tutorial. Defeat the enemies in front of you and you will be awarded either a choice of cards for your deck or an artefact to help you on your run. This will be awarded after each battle so you will be constantly adding new mechanics into your run. Die, and you have to start again. When you do die though, you will gain EXP and upon levelling up you will unlock new characters, load-outs and even new outfits!

The real-time combat is simple. Both you and your enemies will be on a 4×4 square grid which you can manoeuvre around one square at a time. You will see an outline on the enemies grid of where you are aiming in order to cast your spells and likewise, you will see where your enemies spells are planning to land, allowing you to move out of their way — or at least, attempt to but because of how fast-paced the combat is, moving out of the way on time can be tricky.

The cards in which you use during battle are known as Spells and feature various elements. Flame walls, ice to freeze enemies, healing spells, poison bullets… the list goes on. Learning these spells and mixing them together to make the best deck is vital to get to Eden but this is incredibly difficult to do. The two main problems I encountered with One Step From Eden was that, firstly, it’s so hard and secondly, when you are battling it’s so fast-paced that you don’t really have time to look at the spells in your hand and plan… I just found myself pressing the button and dealing with whatever came. Add in the fact that you are only able to see the image of the card so you’re having to guess what it actually does…

The game does look stunning though with a mixture of art-styles depending on where you are in the game. The battling animation is of a pixelated nature and when exploring the menus you will see perfectly drawn characters that are so pleasing to look at.

One Step From Eden is a hell of a lot of fun to play but when you actually want to start accomplishing anything it can get quite annoying getting to an end of level boss and having them pretty much dodge all of your attacks and wipe you out without breaking a sweat — leaving all your hard work feeling pretty pointless.

One Step From Eden is a lot of fun with its unique combat and deck-building capabilities and would be perfect for anyone who enjoyed Slay the Spire. I just wish it was a little more forgiving and with a very slow unlock rate you have to put in a lot more than what you get back.