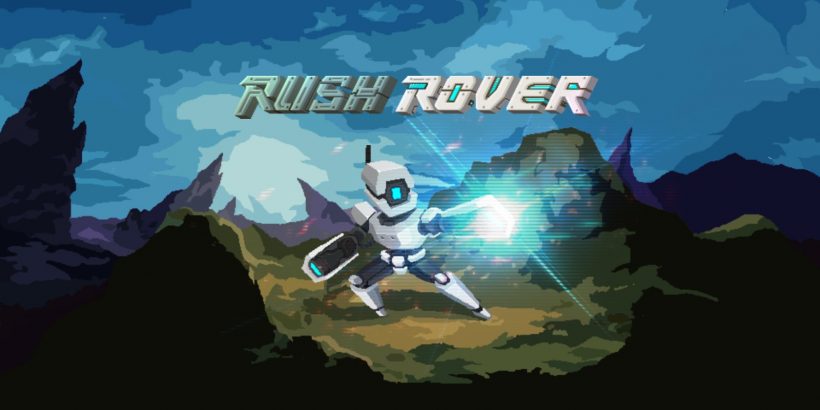 New twin-stick shooters seem to arrive in the eShop on a daily basis, and as a fan of the genre, I’m okay with that.

Naturally, some of these titles accomplish their goals better than others, though some aim strictly for the middle. Rush Rover lands smack-dab in this department. It doesn’t do anything particularly interesting, and the enemies and setting don’t feel overly inspired. What’s more, the game doesn’t have much of a story to speak of, which means you’re essentially blasting enemies and levelling up for the sake of, well, blasting enemies and levelling up.

That said, I simply cannot stop playing Rush Rover. Despite its shortcomings, the game genuinely hooked me; in fact, it provided the same addictive thrills I experienced playing Robotron: 2048 as a kid. And like other shoot-em-ups, the foes you’ll face in Rush Rover seemingly hate your guts. As such, they’ll quickly dump dozens of bullets into your poor robotic body, making quick work of you in the process. And when you die, you’ll wave goodbye to all the perks and upgrades you’d acquired. Rush Rover clearly doesn’t want you to succeed, but I was up for the challenge.

Story-wise, you don’t have much to chew on. I didn’t fully comprehend why, precisely, one robot decided to take up arms against his brethren until I read a short synopsis online. Truthfully, it really doesn’t matter why this little guy wants to destroy the other robots – you’re just here to obliterate everything in your path. As soon as you move into the first room, small groups of violent robots begin to swarm you. Your mission: Turn these enemies into scrap metal and make your way to the boss. Then you’ll do that again. And again. And, yes, again.

At first, your little hero doesn’t deal a whole lot of damage. But you’ll soon begin to acquire cores, which allow you to upgrade different abilities; for instance, when you toss a core into the power train, you’ll zip around areas a little quicker. You can also spend cores to upgrade the probe that assists you during your adventure. Sadly, as mentioned earlier, you’ll lose it all when you inevitably meet your maker. Nothing carries over during your runs, which makes Rush Rover more in line with roguelikes, as opposed to roguelites.

While everything works as it should, Rush Rover has a tendency to feel a little generic. The areas you’ll explore all feel the same, making the world feel repetitive and lifeless. Unfortunately, the same goes for the enemies; although they have different attack patterns, they certainly don’t feel unique. And that’s a problem you’ll encounter during your time with Rush Rover. While the game hooks you with its addictive gameplay, on the whole, it’s pretty basic all the way around. It’s very easy to see how this one could get lost in the shuffle.

Since Rush Rover doesn’t do anything remotely new with the twin-stick roguelite/roguelike genre, I’m not entirely sure who this game is for – besides hardcore completionists like me. Despite the fact that I’ve burned through dozens upon dozens of hours with Rush Rover’s ilk, I still found this one fun, engaging, and addicting, all of which make for a great time. However, if you’re new to the genre and want to experience the best it has to offer, you’ll find plenty of other titles that will serve you much better.