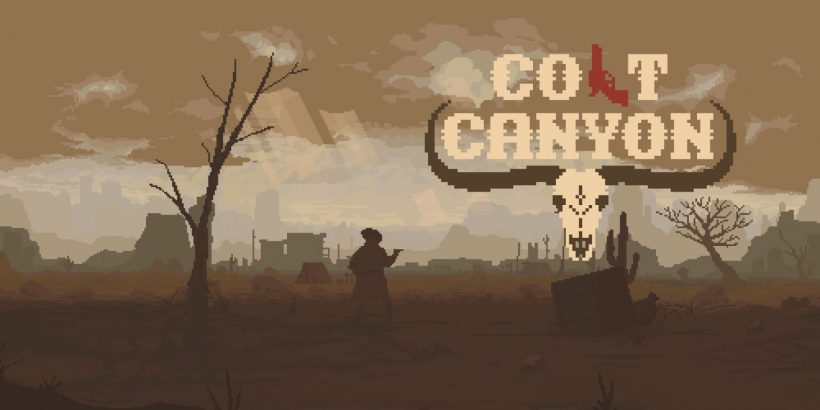 It is easy to see how roguelike games get overlooked in one of the most saturated markets of recent times. There will always be an abundance of JRPGs and 2D platformers, yet the meteoric rise of roguelikes has meant that it is hard for a game to stand out. Colt Canyon, the latest release from the Retrific development team, looks to shake things up with a 2D pixel-art, western-flavoured, twin-stick shooter.

The task is a simple one: rescue your partner by moving right across an open landscape. Along the way, you will encounter all manner of sights and sounds, from enemies with guns and lassoes to horses and rabid dogs. You can pick up ammo, health, and new weapons en route by smashing barrels and crates. Additional support can be found in the form of other prisoners that you can rescue. Doing so offers the chance to make use of a number of powerups, regenerate health, or gain an ally who will accompany you into gunfights.

Punchy and substantial gunplay, coupled with the 2D artistry, never fail to deliver during the time with the game – a weightiness to each pull of the trigger makes gunfights all the more meaningful and the pixelated visuals are delightful, even if they are a bone of contention to some players. Both capture the very essence of a western in ways thought only possible in grand, open-world affairs like Red Dead Redemption and GUN. There are caveats to its success, referenced later in this review; however, any preconceived ideas about western shooters can be quashed here.

Colt Canyon offers a variety of characters to experiment with, and with each having distinct characteristics that set them apart from one another, finding the one that suits your playstyle is paramount to early victory in-game. You can play it slow and steady with a shotgun or run-and-gun with a revolver. Most shooters encourage fast-paced movement, and whilst speeding through is an option, it rarely becomes an effective strategy. Slow and steady wins the race here; surveying the randomly generated landscapes for cover and ammo pickups, or to strategically plot the order in which you will attack your enemies, makes for an enthralling experience.

Whilst it can prove quite an adjustment to transition from expectation to reality, Colt Canyon forces you to through its hard-as-nails difficulty. Ammo is sparse, enemies are stubborn, and the game can be over in a flash. The joy of finding new ammo or recuperating at the end of an act is a gentle reminder of how tense the game can be at times. Alerting enemies to your presence too soon can make all the difference, and a very successful run can be over in a matter of seconds with a permadeath presence lingering throughout. A superbly subtle soundtrack accompanies the on-screen action and is purposefully placed to increase tension as things go from bad to worse.

The roguelike and random nature of this title is its unique selling point, yet it is also its greatest downfall. Whereas twin-stick titles like Hotline Miami reward the player for learning the layout and enemy routines, Colt Canyon takes that element away. In doing so, the motivation for ‘one more go’ dulls over time. There’s only so many times one can pick themselves up from a run to go again, knowing that nothing will be the same and you’ll need to learn a new strategy once again.

Colt Canyon offers an interesting take on the western genre which works extremely well as a roguelike adventure. Pixel art, twin-stick shooting, and a well-crafted soundtrack combine effortlessly, it’s just a shame that it is as challenging as it is.