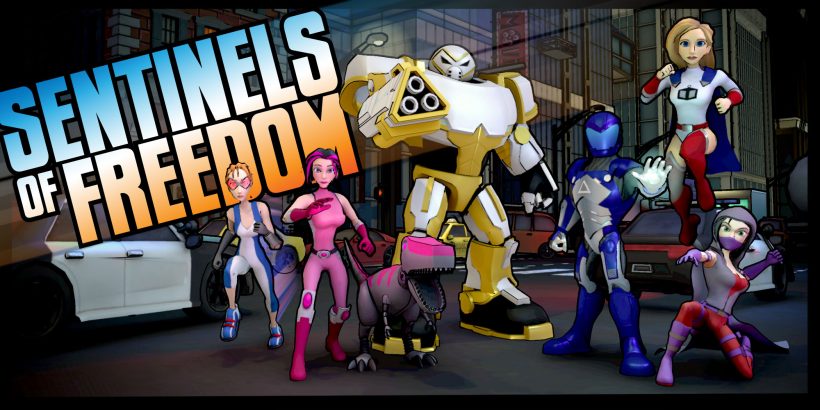 Despite increasing popularity, the tactical RPG genre can be quite impenetrable for many fans, especially younger ones. Sentinels of Freedom however hopes to simplify the mechanics of the genre, add a comic book aesthetic and even allow you to create your own hero to play with… but can it make this type of game more accessible, and does it fly high with the best of the genre?

With a bright art style and campy dialogue, Sentinels Of Freedom is a light-hearted take on the superhero genre, presented with the optimism of a Saturday morning cartoon. You’ll be beating up the bad guys, helping to free hostages and doing basic superhero deeds. You even get to design your own hero in an impressively robust creator in which you can choose your character’s background, powers, armour, features and more. It’s all simple heroic stuff, until we get into the mechanics, where things begin to get a little more complicated.

In Sentinels Of Freedom you will be controlling a team of heroes including your crafted character. Each mission you will be required to navigate the different levels by strategically placing your characters to attack foes and save civilians, while taking it in turns to activate their abilities. Sometimes it’s as simple as choosing to attack the foe in front of you with a laser beam; other times you might use a ranged weapon to target someone further away, or activate a turret mode on a robotic character to set up a trap for any encroaching baddies. It’s a fairly decent system with a lot of room for different tactical approaches. While you can move often and pretty freely, the levels gate you with the positions of the bad guys, and it very quickly becomes tougher than expected to use your available space efficiently.

The levels change up as well with varying mission objectives such as saving civilians, and there are different advantages and disadvantages to various enemies and weapon types that you’ll want to remember when taking on the toughest levels. Luckily, the variety of active and passive abilities provides a huge amount of scope to plan your strategy. The ability to change your characters attacks potentially offers a lot of strategic freedom, but unfortunately in execution the mechanics of activating these abilities are inherently awkward.

Throughout Sentinel Of Freedom’s approximate 10-hour campaign, on each turn you are moving your characters and selecting their abilities through quite a lengthy process that is both fairly obtuse and demands too many button presses. Scrolling through available abilities to get to the one you want is tiresome, and the icons and accompanying text are also so small as to make it difficult to see what you are attempting to select. This is especially true in handheld mode. Even more infuriating is a lack of touch controls, which would have solved a lot of these issues in handheld. In addition, while the story and visuals are passable, neither are impressive enough to incentivise players, and so the awkward controls may deter people fairly quickly.

Altogether, as an introduction to the tactical RPG genre, Sentinels Of Freedom somehow ends up being more difficult to play than much more mature games in the genre. There is fun to be had here, and superhero fans will enjoy creating a character and tackling the bad guys, but a few smart additions and some visual improvements would have truly saved the day.

While it’s perfectly passable and could be fun for children and diehard comic fans, Sentinels Of Freedom neither streamlines nor improves the ideas of tactical RPGs. This along with fairly drab visuals and a passable story mean there’s not much here worth saving.