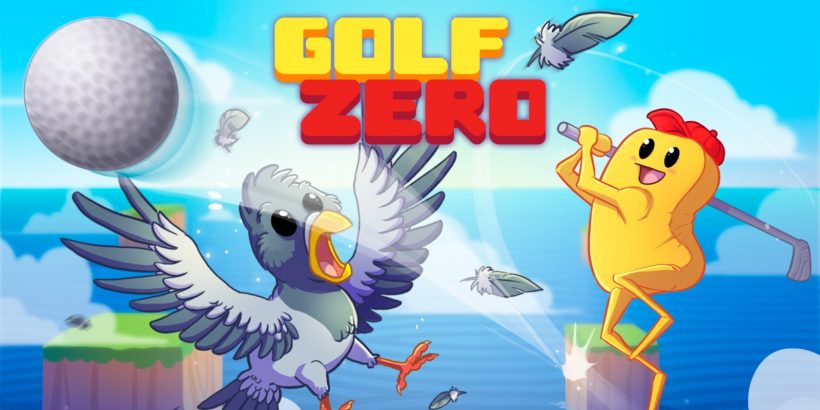 Golf, platforming and puzzling all rolled into one is quite the mash-up, and that’s what Ratalaika Games have produced with Golf Zero. Give Super Meat Boy a golf club, remove the gore, add physics-based puzzles and off to the tee we go. You take control of a nameless character that reminds me of a certain world leader –  Small, rotund and perma-tanned, sporting a red cap. Thankfully, this little guy is really quite likeable, and armed only with a tiny golf club.

Golf Zero’s tutorial introduces the game mechanics and controls nicely; it’s simply B to jump and A to take your shot. When you press A, a three-second timer will start, giving you a short period to get three balls ‘in the hole’ as accurately and effectively as you can. If you go wrong, a quick click of the Y button or L trigger will reset the course so you can try again. The first few levels can be navigated quickly, and you will feel comfortable in no time at all, but from there the difficulty will begin to rise. In any normal golf game, you would play from the tee, whereas here you play from the ground or in the air. Holes are placed on ledges or in between slopes and your task is to find the correct trajectory to make the hole and proceed.

As soon as you’re ready to hit your first ball, the aforementioned timer starts and with the left control stick you set the trajectory you think the ball should travel in. Those that are thinking Angry Birds are in the right ballpark (pun intended). Time is slowed down once you’ve fired as you watch anticipantly, and if you get your ball into the hole with any of your three shots you’ll be awarded a silver medal. To fully complete each stage and achieve gold, however, you’ll also need to pop red balloons scattered throughout.

These pesky balloons are not always en route to the hole, so you will need to use your ingenuity and consider the physics of the game if you want to pop them. You can side jump off walls and use the springs to get to places that initially appear unreachable, and by taking your shot and making the most of slowing-down time, you can get the balloon with one ball and land on a platform ready to refocus on the main goal.

With over 80 levels, Golf Zero’s gameplay becomes increasingly creative and mind-boggling as you proceed. There are mine carts to jump across, rotating blades to avoid, and even squidgy green aliens to bop and use to reach higher platforms, avoiding boulders that come after you Indiana Jones-style. Aside from the main game, there is also a ‘speed run’ mode for the ultra-competitive, which has you trying to get to each level’s hole in the fastest time possible.

The game’s music is addictive and jaunty throughout, its pace fast and in-keeping with the levels themselves. The pixel art styled visuals are also pleasant, and should be familiar if you’ve played a Ratalaika game before. The controls themselves are also responsive, and everything runs beautifully. One slight gripe is that there are a handful of instances where you have no idea where the hole is to begin with, and it can become frustrating as you have to die to find out how to survive. It’s also a shame that an online multiplayer mode has been overlooked, as with that option I would have had no hesitation in giving this game an extra point.

Overall, Golf Zero is a game I have fallen in love with. The levels are well designed and I enjoyed every moment that I spent in its company. Forget eagles, birdies and hole in ones – this is high octane golf!

Who would have thought that a round of golf could be so much fun? Ratalaika has produced a true hole in one with Golf Zero, a gem that will have you playing for hours on end.