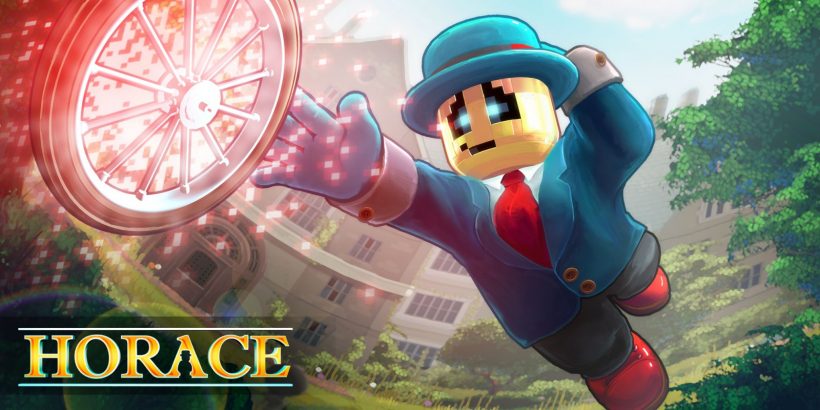 For those of you old enough to have played the ZX Spectrum, the name Horace will no doubt be ringing bells; he was essentially the unofficial mascot of the system. This isn’t the same Horace, but it’s no coincidence that our leading man takes his name in this superb indie platformer from Paul Helman and Sean Scaplehorn. Horace is packed full of pop culture references going as far back as the ’70s, and after a 7-year development journey, this epic of an adventure is the true definition of a labour of love, bursting with the personality of its creators.

For those with a keen eye for ’90s movies, Horace’s opening bears more than a glancing resemblance to the wonderful Robin Williams movie Bicentennial Man, in which a robot is brought into service at a wealthy family estate. As it begins to show symptoms of a higher consciousness, it’s then nurtured by the patriarchal figure, referred to in Horace simply as ‘The Old Man’. The purpose of Horace’s being there isn’t initially clear, although shady men in suits seem very interested in what he’s capable of. These opening couple of hours are spent introducing you to a fantastic cast of supporting characters within and around the family, each completely unique, and not all of them pleasant. But regardless of their intentions, their development as characters in relation to Horace is beautifully done.

It’s difficult to go into more detail without entering catastrophic spoiler territory, but rest assured that the idyllic life Horace learns to find purpose in isn’t built to last. What grows from that point is the most incredible 15-hour journey taking Horace to places neither we – nor he – would ever have dreamed, as he tries to better understand the world around him, the cruelness and kindness of the human condition, and to ultimately protect those that he loves. It’s a game with philosophy running through its veins, begging us to step aside and look at things from the perspective of someone born into the world as a fully-grown adult, and the wide-eyed wonder and terror that would bring.

But don’t let me give you the impression that this is a game taking itself too seriously; that couldn’t be further from the truth. There are certainly stirring moments – and this is by no means a game for children – but these are punctuation marks set against a tale that is otherwise filled with joy, whether it’s the hilarious way it’s narrated from the naive perspective of Horace himself; the brilliant inclusion of classical music reimagined in 8-bit format complementing a gorgeous pixel-art design; or the dozens – if not hundreds – of pop culture references running throughout the adventure.

Those references are sometimes small details floating in background artwork, such as Basil Fawlty scolding a tiny robot Manuel against the backdrop of his hotel, or the town of ‘Sitcombe’ that’s occupied entirely by recognisable characters from shows like Friends, Seinfeld, and The Fresh Prince. You’ll visit worlds inspired by Alice in Wonderland and Sonic the Hedgehog. There are actual video game arcades filled with playable spoof versions of classics like Pacman and Outrun, all created with love. These are but a small handful of nostalgic reference points that Horace leans on, but it does so in a way that feels complementary and never overbearing. Horace has a lot to say on its own – it’s just making sure we have a hell of a lot of giggles along the way.

It would be easy to write this whole review about the thematic content of Horace because it’s so abundant, but it just so happens there’s a brilliant platformer here as well. Horace moves with surprising precision for a heavy old robot, and running, jumping, and collecting junk – a task assigned to him by The Old Man at the start of the game – is a smooth, satisfying affair. Gravity boots allow Horace to run along walls and ceilings, introducing puzzle elements as you work out how to navigate your way around deadly obstacles.

Be warned, there are some sections that involve very precise timing and dexterous fingerwork. Bosses, in particular, can really get the vein on your temple pumping, but unlike other, more self-identifying “hardcore platformers”, Horace is generous with save points and you respawn in the blink of an eye. These platforming areas can sometimes feel like a means to an end, giving the impression that the developers had a heck of a lot of narrative to work with but couldn’t quite work out how to fit it all together. But overall these segments create an effective pace throughout.

The great Roman poet Horace himself once wrote “Whatever advice you give, be brief”. And so I shall. Horace is a brilliant, unique title. It’s clear that what started off as a humble indie for the developers soon grew into an untamable beast, and the only thing to be done at that point was to see where that beast dragged them. Fortunately, this was on a journey of inspiring discovery, tender moments, and hilarious diversions; and now it’s your turn to see where it takes you.

Horace is a 7-year labour of love from a two-man development team, and the amount of quality content here is incredible. Packed to the rafters with nostalgia, it provides laughs, tears, and a brilliant platforming experience that everyone can enjoy.