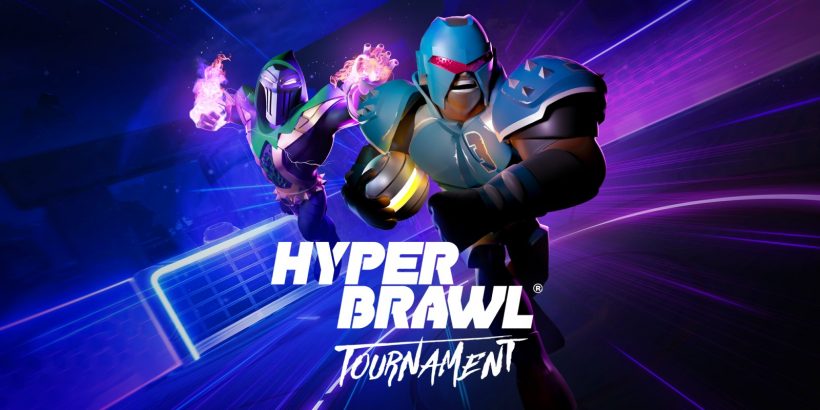 When I booted up Hyperbrawl Tournament, I was taken back years, thanks to the resemblance it shares with Dead Ball Zone. I hadn’t given much thought to that futuristic Gaelic football outing in the years since, yet Hyperbrawl Tournament’s Fortnite-esque overhaul of one of my nostalgic stomping grounds had my attention.

The underlying plot of Hyperbrawl Tournament tells of a group who are collecting champions, pitting them against each other to find the best of the best. The purpose is never shared with the player and, to be honest, that’s probably as deep as I’d want a plot to be in a game like this.

Before entering the 2-v-2 tournaments of Hyperbrawl, you have to pass The Trails, a tutorial section that teaches the player the gameplay basics. I appreciated how this introduction to the game was handled. It didn’t overstay its welcome and completing it rewards you with a trophy and some in-game credits. Fear not, I’m happy to report that the unlockable cosmetics on offer can only be redeemed through credits earned by play, this isn’t a game supported by its microtransaction economy.

Despite the number of game types, from online to freeplay, options are lacking on the accessibility front. You’re able to alter the sound sliders for music, SFX, and the announcer independently, but that’s about it. That being said, the announcer began to recycle dialogue after only the second match, which saw me actively muting that part of the audio experience promptly.

Starting a campaign in bronze, silver, or gold difficulty pits you against other teams, completing fixtures and aiming to finish in the qualifying spots for the cup at the end of the season. You select your own characters and weapons, with the game allowing you to alter these selections after each match, giving you the chance to rework your playstyle.

This game comes preloaded with a number of heroes, and although many feel generic in design, they offer different ways to play. Sleeker heroes, such as Go-Zen, can outmanoeuvre heavier characters. Larger heroes, such as Brawlbot, pack a heavier punch and win the ball more easily.

Tackling in Hyperbrawl Tournament is carried out by either kicking or punching your opponents. Kicking can be unpredictable and is best avoided, whilst punching is consistent but works at a shorter range. Weapons and equipment allow for a number of offensive and defensive benefits, from dropping a Reinhardt-esque shield which protects your goal to dispatching enemies quickly with a swinging sword-like ability, akin to Link’s spin attack. Characters can also build up hyperforce, granting increased speed and one-hit-kill damage for a short time. Hyperforce opponents easily plow through your defences and goals conceded like this often feel completely unavoidable.

The design of the maps shows a lack of consistency in both size and complexity. The non-randomised nature of the ball drop in Downtown Showdown ensures that it always falls in the top of the map, just off-centre. If you’re the first one to this spot, it is a straight shot to the goal, resulting in rounds that end in the double digits and are never really given the chance to get going.

In all, this game is a fun concept that is let down by execution. It seems fairly barebones and could certainly be built upon to provide a more comprehensive experience. With a number of maps too small for their own good, and with little in the way of tactics, the simplicity they’ve gone for doesn’t do the game any favours.

Hyperbrawl Tournament is a game that has a solid concept but doesn’t quite stick the landing. With a game that would have benefitted from greater depth in the gameplay loop, it’s still a title that will result in isolated enjoyment.