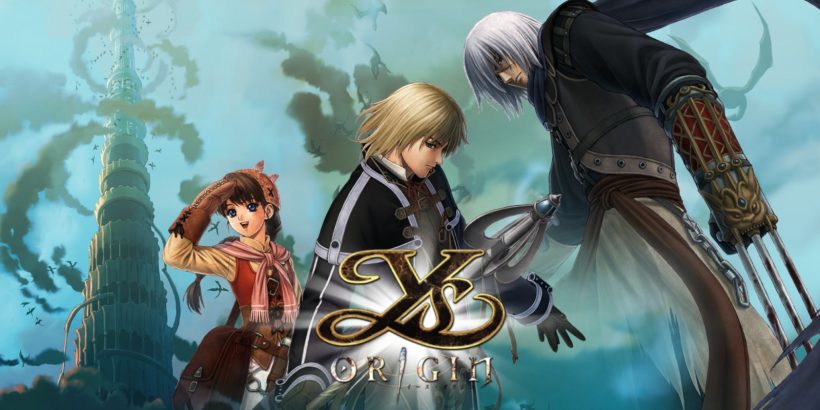 Whether you’re a fan of the long-running Ys series or you’ve just discovered it, Ys Origin has some undeniable high and low points. And yes, I am – in part – talking about the demon-filled tower you’ll be ascending and re-ascending; I’m also talking about the fact that this hack-and-slash adventure will have you feeling like an action pro in no time, offering ample challenge and plenty of replay value.

We begin with a choice of two stories to play through, and a third upon their completion. All of them take place within Darm Tower, a gargantuan structure that exists to bring about the downfall of Ys, which fled a demon-infested planet by raising a piece of land to the sky. Now, we must breach this tower to rescue the two missing goddesses inside. This can be a bit confusing to people unfamiliar with the previous games, but the scenes do a decent job of catching everyone up.

The story and setting are interesting, especially since it serves as a prequel to earlier games in the series. Every character we meet is brought to life through dialogue portraits, and the animated cutscenes are beautifully done. However, it’s drab to play through the same levels and puzzles with different characters – even if we do get different story elements and boss fights.

Although axe fighter Yunica Tovah and mage Hugo Fact ascend the same levels, you won’t get the full story until you put all of the pieces together. Plus, their playstyles are vastly different. Yunica gets up-close to deal heavy melee damage, while Hugo must shoot magic bolts from afar to stay alive. The three elemental artifacts they acquire bestow different abilities upon them, as well. For example, the wind ability protects Hugo, and surrounds Yunica with a damaging wind; it also propels both of them over farther jumps.

Slashing through hordes and strategically dodging powerful bosses all feels like a button-mashing breeze, no matter who you play as.  Even the light platforming feels smooth. This buttery gameplay and classic soundtrack make for an enjoyable dungeon-crawling experience, despite levels recurring in each playthrough. Each part of the tower also feels distinct in layout, and there’s a handy item that allows you to warp back to any save point at any time. In short, the game does a decent job of distracting you from the fact that you don’t get to explore the world outside.

In addition to a third unlockable character, Ys Origin extends its lifetime by offering multiple difficulties and three modes outside of the main story: Time Attack, Arena, and Speedrun. They’re all designed to push your abilities, serving up ample challenge to people who’ve completed the main game (three times over) and still have an itch for this simple-yet-strategic combat.

At just £17.99, there are competing games that offer far less value in terms of replayability and overall quality. Taking a step back, Ys Origin is a must for fans of the series who would like to meet new characters and learn the lore of this land. For series newcomers, it’s a quality hack-and-slash RPG that could very well pique your interest in an underrated franchise; then again, although it’s decent, it’s also very different from most other Ys games. Casual players might also enjoy the railroaded, bottom-up motion that others could find boring: you can pick it up at any time and get to work on saving the goddesses with little catch-up necessary.

As I said before – highs and lows. When push comes to shove, the good outweighs the bad, and we have a solid story worth wishlisting.

Ys Origin serves up undeniably fun hack-and-slash action, with just enough lore to keep newcomers and series veterans alike satisfied. Although there is a healthy challenge and tons of replay value, staying inside of the same tower can get dull.