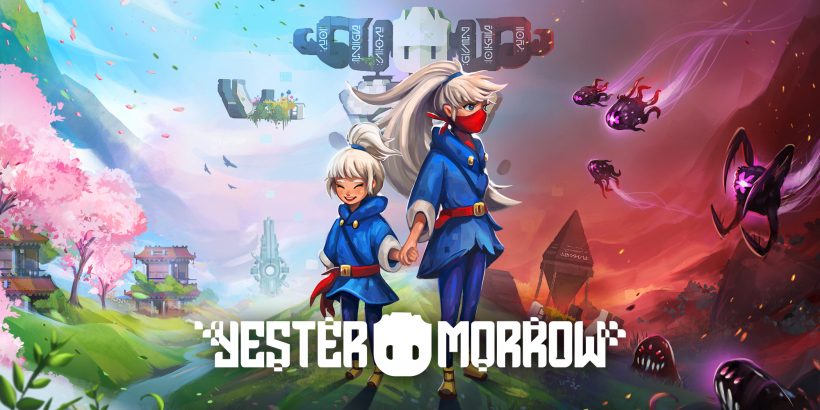 YesterMorrow arrives in a crowded marketplace, a bit behind its time — ironic given the time-travel theme. It’s another 2d platform metroidvania(-ish), with cute pixel graphics and a 16-bit aesthetic. It either needs to play really well or make the most of its core gimmick.

That gimmick is central to the plot: you play as Yui who must travel back in time and rescue her family from the evil pervading the land. Certain base stations allow you to switch between present and past, worlds which are hauntingly familiar, yet unnervingly different.

The game looks fantastic, right from the very beginning. The combination of very fine pixel art, use of bright colours, and Sonic-esque checkboard patterns work really well. The scenes, in particular the idyllic village set in the past, are highly attractive, and the graphics make the best effort when it comes to interpreting the time-travel motif.

As a platformer, YesterMorrow offers a decent experience, without ever really being particularly interesting. It doesn’t innovate half as much as it would like to. In particular, the time-travel mechanism is a good enough hook for the narrative to hang onto, but it doesn’t really affect the gameplay in any meaningful way.

It’s not without its strong points: the individual level design, standard upgrades including double-jump and dash, and the challenge posed by bosses are all decent enough. Those bosses are tough — really tough — but they have well-designed attack patterns, and can be conquered with practice which is pretty much all you can ask of a decent platformer boss fight, I reckon.

Checkpoints, which also restore health, are plentiful, and health upgrades are generous enough to counteract some tricky platforming and unforgiving hitboxes. Whilst there are enemies, they’re mostly dealt with by avoidance rather than attack, but the bomb power-up makes dispatching many of them pretty easy anyway. Overall, the difficulty has a nice pleasant slope across quite a substantial game size.

However, where YesterMorrow goes wrong, it really goes wrong. It’s truly disappointing to see some of the bugs and glitches on show here. During this review, the game received a patch, and I haven’t seen any of the graphics glitches since then — they plagued the early game, with random flashing and distortion, so hopefully that’s the end of that. The option to view information about a map location now actually works too. But frame drops are still very much a thing, to a point where they can badly affect gameplay.

Perhaps a more fundamental problem is the overall design of the game. It’s a linear journey, but presented almost as if it’s more open-world, and navigating such an in-between space is much harder than one or the other. I felt lost on many occasions. Then I wondered if I’d taken an obscure route or if it had been planned out, exactly that way, all along.

The map doesn’t help in the slightest. It’s a basic overworld image with areas that get revealed, but this really bears no relation to the actual game at all. And the game’s various collectibles are cute — the animal petting is a great distraction — but it can be difficult to follow exactly what they all do and what the point is.

There’s a good game looking to emerge from YesterMorrow, but it needs a stronger focus, either fully committing to innovation or doing away with gimmicks altogether. Some of the excellent artwork and level design has suffered from the overall execution, and the frame drops desperately need to be fixed.

It may look the part, and it may even manage a reasonable shot at a puzzle platformer, but YesterMorrow’s parts don’t really combine smoothly enough to produce the gameplay experience that this sprawling, challenging adventure deserves.