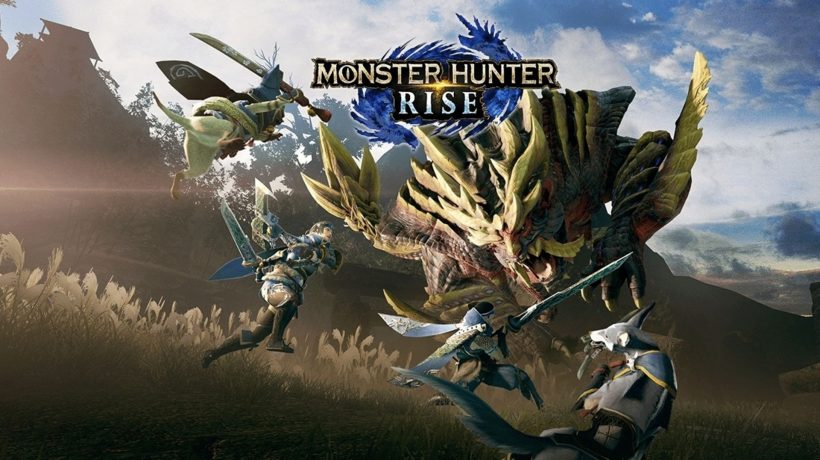 The upcoming Monster Hunter Rise looks to be a huge leap forward for Nintendo fans of the series, as the imminent entry seemingly borrows a lot of the best elements from the PS4/Xbox release Monster Hunter World whilst also injecting new energy to make Rise feel both distinct, and very suited to Nintendo hardware. While the official game release is March 26th, the lovely people at Capcom provided us early demo access so we can bring you our impressions so far.

The first blindingly obvious change is that Monster Hunter Rise is a luscious and beautiful game. While Generations Ultimate was a port of the 3DS title on the old engine, Rise has been built from the ground up for Switch with the impressive RE Engine. The textures are detailed and the tropical foliage gives a greater sense of depth and nature to levels. Even the running water is beautiful to look at. This is all coupled with a fantastic diegetic sound design where rustling leaves and chirping birds help make the world feel more alive than ever. Even more impressive are the monsters that are brought to life with new graphical detail and fluid animation. In our demo, we got to fight the returning pink bubble wielding menace, Mizutsune, whose colourful patterns and snakelike movements are a great showcase for just how graphically improved Rise is from Ultimate. Even if future hardware makes this look better, this is already one of the best looking Switch games yet.

The biggest addition to gameplay is the new Wirebug: a glowing insect you can latch onto and use to pull yourself into the air, zip forward across terrain, or to jump up vertically and prepare for an attack. While the upward movement is reminiscent of the Insect Glaive introduced in Monster Hunter 4, the changes that the rest of its moveset make to both traversal and attacks are wild. Suddenly, your Hunter can nimbly jump around levels vertically, which have incidentally been opened up dramatically to make the most of this. Levels are also no longer separate rooms with a loading screen in-between, but a sprawling expanse to be seamlessly explored with the Wirebug, pulling yourself up cliffs and performing wall running acrobatics to access greater heights. If you ever wondered how a Hookshot would work in Breath Of The Wild, I can’t imagine this is too far off.

Your exploration will be rewarded, not only with regular items dotted around but also Endemic Life such as bugs and birds being found in remote locations, each offering different buffs to your character. We played through the Shrine Ruins which made the most of the new interconnected, seamless layout with lots of steep cliffs just begging to be climbed. You can also find Great Wirebugs which act as shortcuts to steep vantage points, from which you can spot monsters and plan your attacks, or just admire the view. These bigger levels also come with a quicker way to explore them in the form of your new faithful Canyne – the Palamute. These charming creatures can be ridden swiftly through areas, are fully customisable with outfits, and along with series stalwart the Palicoes, they can also assist in battles.

This isn’t the only change in battles though, as your Wirebug also comes with new Silkbind techniques which add an additional layer of complexity to master, but offer greater verticality to your blows and more opportunities to evade attacks than before. You can also use the Silkbind technique to trap and ride monsters in a new feature called Wyvern Riding. Almost any monster can be ridden with enough skill, and even in our limited time with the game, we surprised ourselves by wrangling a roaming Rathalos and using it to attack the Mizutsune we were trying to defeat. While we couldn’t try out Multiplayer yet, we can only imagine the sheer joy that the new possibilities and interactions will create. Watching a buddy charge in on a Rathalos to deliver the killing blow is something I didn’t know I needed, but can’t wait to see.

So far Monster Hunter Rise doesn’t compromise on what makes this series difficult or fun. Instead, it seems to be making smart decisions to bring this world to life in even greater detail, and provide players with exciting new ways to traverse it. The Wirebug techniques and Palamutes allow you to explore higher and faster, while the Silkbind moves and Wyvern Riding add more depth to the methodical action the series has always done so well. Along with the impressive visuals, new features and new monsters, including the imposing Magnamalo (and their beautiful Amiibo), this is looking like an obvious purchase for fans of the franchise, but frankly an essential action game for any Switch owner as well.