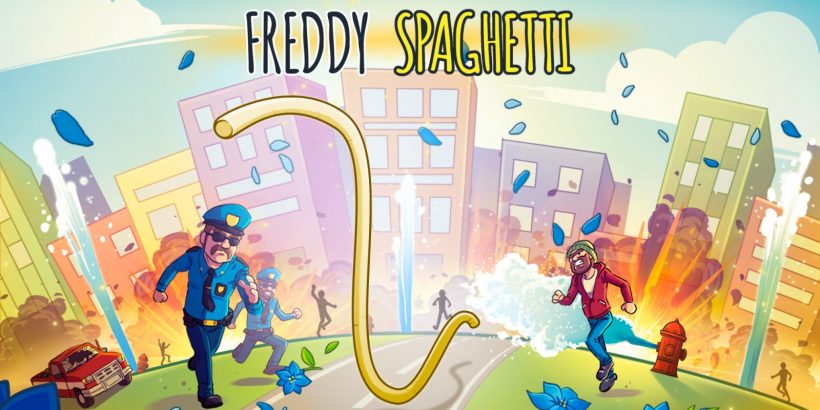 Pasta has brought a lot of comfort to my life, so I was fairly intrigued to hear about a game where it would also bring me some comedy. The latest from publishers Ratalaika, Freddy Spaghetti is a physics-based platformer where you control a sentient piece of spaghetti named Freddy. It’s as bonkers as it sounds and only gets weirder, as while Freddy is initially confined to explore the house of the professor who made him, you’ll soon be exploring the world and causing havoc. But is this piece of pasta in need of that special sauce?

At the outset I found Freddy Spaghetti to be an exercise in frustration. Despite some charming narration the game’s many levels often place you in a room to find your own objective, save a few obvious outliers. It’s one thing being left to explore, but another being left aimless with the only way to learn being failure. Falling down from kitchen cabinets repeatedly or having to play a level again because you didn’t know what you were doing isn’t fun. Especially when moving around is so difficult. Spaghetti isn’t very nimble, so it’s not an easy thing to control, and the struggle is similar to another food-based platformer, I Am Bread. To control Freddy you use the analog sticks and triggers to move either end of him, with more wishful thinking than precision.

So luckily this is a game much more focused on the comedy than being a competent platformer, and despite some strange choices it mainly achieves its goal. It’s a short game but it tells a story with each new level and world, with some truly weird challenges in a few of them. You’ll be avoiding missiles, googling your own mortality, playing Frogger, and tackling some even weirder challenges across the length of the game. With such a wide selection of game types though there’s quite a few duds, and for every level that made me laugh there was another where it was far too frustrating to achieve the goal. Playing as spaghetti is funny for a while, but when the game repeatedly gives you challenges that depend on precision platforming or timing your movements, suddenly the randomness of the controls is infuriating instead of funny.

The loose movement could be forgiven if it was funny to fail, but instead of being able pick yourself up you have to start over. While some levels are mercifully over in seconds, others can take minutes and a failure that doesn’t feel within your control isn’t funny anymore. The presentation also falls flat in many other areas, with the visuals being fairly dull but also some camera angles both presenting the game in an unflattering manner and also making things more difficult. Similarly the music didn’t help, with the first few worlds sounding cheap and weirdly arranged, with lots of loud instruments battling over each other. The later worlds look a lot better and have better music, but it could have been a lot more consistent. It’s a short game at least, done in a few hours with a few funny challenges unlocked at the end, but considering how each level felt more like an ordeal than a joke I don’t see much scope for replaying this one.

Altogether Freddy Spaghetti is a competent game that, while focused much more on being funny than being a good game, sadly does neither particularly well. It doesn’t have the freedom of something like Goat Simulator and platforming was too painful to carry it either. A funny story is buried in here but it’s let down by quite a fusilli mistakes. I’m alfredo won’t be able to recommend this one, and even at such a low price it’s not quite worth every penne.

This pasta based platformer spends more time trying to be funny than being fun to control, but somehow doesn’t quite manage either. There’s some laughs to be had, but the ingredients here don’t work well enough together to make it worth a dip.