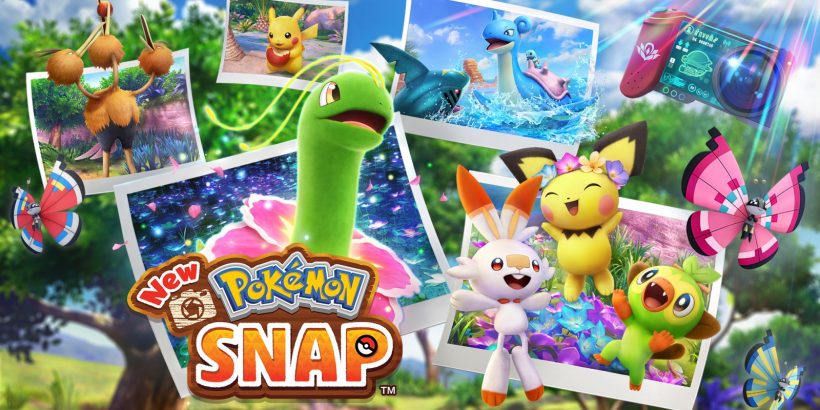 Be it the absence of nostalgia or its late 90s origins, the announcement of New Pokémon Snap in June of 2020 failed to ignite any real desire for me to pick up the virtual camera and get shooting. The premise is a good one – our favourite Poké monsters offer the perfect portraits for it – but it’s just not been a game that ever appealed to me. Even as a seasoned veteran of the mainline Pokémon games, the original N64 release passed me by.

In the time since, video game franchises have introduced all manner of new genres, making the ideas behind Pokémon Snap much more palatable to the average gamer. Much akin to that of a photography simulator, New Pokémon Snap places you on rails and asks that you take photographs of the landscapes and their inhabitants to help Professor Mirror with his research.

At its core, Snap feels archaic. We’ve seen advancements made, particularly with reference to photography, and many AAA blockbuster titles launch with an in-built photo mode to snap your favourite moments. Many players could be forgiven for thinking that we’ve moved beyond what Snap offers. It’s only as Snap starts introducing players to its many intricacies does an understanding and an appreciation for this revamp of a much-revered entry in the franchise begin to develop.

Whilst an appreciation has been garnered throughout my playthrough, it’s important to acknowledge that Snap is still just about taking photos. You embark on a trip through one of the seven environments, be it in the daytime or at night, and spot Pokémon in the wild. In the initial couple of runs in any one landscape, the Pokémon aren’t that busy, with only a few of them offering up the chance for that picture-perfect moment.

And that picture-perfect moment takes a while to get right. Bandai Namco has developed a set of criteria that all need to be carefully considered when taking the shot. Where is the Pokémon positioned? What’s in the background? Are they interacting with the environment? How many Pokémon are on-screen? There’s a lot to factor in, but the well-designed control system ensures it all becomes second nature very quickly.

Once a run is complete, either by reaching the end of the road or using up all of your film, you return to Professor Mirror in the lab. He assesses the photos against the aforementioned criteria and awards both a point score and a star rating. There’s a complexity to the star rating and points scoring which provides a much-needed reason for replaying, and repeated runs are available at the touch of a button. The short running time of each stage is a stroke of genius, and means that you can use a run to focus on one or a select few Pokémon rather than trying to capture everything you see.

Witnessing Pokémon behave in different ways on different runs provides an adrenaline rush that it would be difficult to relate to until you experience it yourself, and it is commendable that Bandai has been able to achieve such things. Uncovering secrets feels exactly as it should, encouraging repeat playthroughs to find things that you may have missed.

Being drip-fed upgrades and tools initially felt like a stroke of genius too, with runs providing ample opportunity to test them out. Unfortunately, as you enter a new region, you lose all access to these tools and need to capture the required photos in order to unlock them again. It starts to feel like filler, and the results prove to be less fruitful than what may have been intended.

It’s this, coupled with the rudimentary Pokémon story, that causes the early promise of New Pokémon Snap to start to lose its momentum. And that’s exactly what I would say for the gameplay too. Pokémon Snap has carved out a new genre that stands on its own. There’s no competition, no franchise doing anything similar, and that’s ultimately its downfall. This game, 20 years ago, would have been a breath of fresh air. Of that, there is no doubt. This game now? In 2021? In a gaming playground as big as this?

It’s dated. The core concept works extremely well, and its appeal is obvious. But on its own, it’s not enough. It feels like a proof of concept that could have been easily expanded upon. What about having the opportunity to slow down, speed up or stop your vehicle at will? How about travelling off the beaten track unaided? Or getting out of your NEO-ONE and creeping up for that perfect shot?

Back when Sword and Shield were being marketed, a 24-hour live stream was launched whereby fans could sit and wait to see what monsters may make an appearance. I wouldn’t be alone in saying a fully realised version of this with Pokémon Snap-like features would be incredibly exciting. A lot has been done to make it feel like a living and breathing landscape, and it does do that to some extent. However, it still feels somewhat scripted.

In its current guise, Snap feels restrictive – even with all of its hidden complexities and reruns. It doesn’t do enough to keep players invested for the long haul, nor does it capitalise on what was designed all those years ago. There’s been a frustration with Pokémon games from some circles in the gaming community, and Snap isn’t going to be the game to quell these frustrations.

More notable frustrations in recent years have centred around visuals, with that now-infamous tree in Sword and Shield a microcosm of wasted potential. The visuals in Snap are competent, but unremarkable. There are periods of vastness that don’t quite capture the magic of the smaller, more intimate settings. Vibrancy and detail are essential, especially in games that are much more passive. Snap fits the bill, but its landscapes aren’t quite as well realised as they should be.

This is more noticeable in handheld mode, and on occasion, it can be particularly jarring to see the downgrade in visual quality. Four years into a console’s lifecycle, and with ample experience creating games for it, it really feels as though this shouldn’t be the case. Especially with a game so well-suited to handheld play.

If we were to accept that it was right for the core gameplay loop of Pokémon Snap to remain the same in this remake, and any notions of removing the rails or allowing free travel should be discounted, then at the very least, a multiplayer mode could well have been the inclusion that elevated New Pokémon Snap. There is an online element, with the option to share the photos you’ve taken and having players like them – but it’s not enough.

It would have been superb to have a competitive, or coop, element, whereby two players share the same NEO-ONE vehicle and journey together through the landscape. Each captures photos of the Pokémon and either compete or collaborate for high scores. A game mode such as this would be that little something extra that provides the variety needed to increase longevity and replayability.

New Pokémon Snap is good. It’s not great – although it could have been – but what it looks to achieve it does so comfortably. There’s a solid foundation that’s been built here in a modern engine, and a second game would be welcome. Expanding upon and delving deeper into the mechanics would be beneficial to garner new players and keep older fans invested. A lot of emphasis has been placed on new interactions and hidden secrets, offering enough to keep players invested once the credits roll. That inherent need to keep playing may not be there for everyone, however, that could be true of the game as a whole for those players.

New Pokémon Snap offers fan service to those who were there when it all began. Unfortunately, it doesn’t do enough to engage and retain new players, failing to make full use of the niche genre it invented.