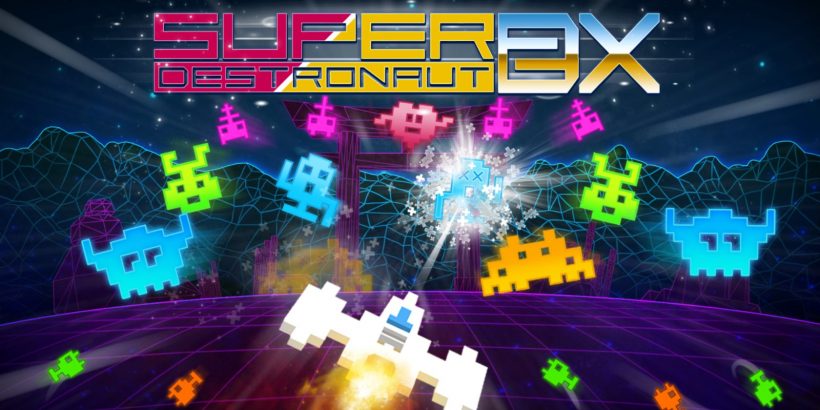 “Kill some aliens!” This you are told at the start of every run in Super Destronaut DX-2, the latest in a long line of retro-style 2D space shooters. In a way it shouldn’t come as a shock. After all, this type of game has been asking us to rain hell down on waves upon waves of menacing extra-terrestrials for decades now. Question is: Does this this glitzy follow-up to 2018’s original Super Destronaut DX fire on all cylinders? Yes indeed, providing you’re not looking for absolute depth and simply want to test your firing skills in bite-sized bursts.

I say “bite-sized” because that’s when Super Destronaut DX-2 is at its best, ushering you not towards classic modes like Time Attack or Hardcore, but rather its Challenge tower. This forms the main crux where you, a lowly spaceship, must test your mettle against the alien threat, learning to dodge, shoot and manoeuvre while simultaneously managing the different modifiers that each world’s five challenges presents you with.

Challenges can include contending with a limited number of bullets, having to navigate oversized bullets, or even fighting enemies that shrink the more time goes on. Specific tweaks to the familiar 2D shooter formula force you to always stay in the game mentally, with all five challenge worlds gradually ramping up in difficulty and the type of modifier it employs. As if this wasn’t already tricky enough, Super Destronaut DX-2 only ever lets you fire in one direction, up, so it’s worth paying attention whenever enemies descend from either the side or underneath.

Each challenge world might only take 5 or 10 minutes to complete, but players looking for a more traditional arcade shooting experience will find it here too. Score chasing in any of the pre-set modes is as fun as it’s ever been, although it’s a shame that online leaderboards are a no-show. There’s also no dedicated local multiplayer mode to let you and your friends compete against one another at the same time. Rather, right now, the only way Super Destronaut DX-2 truly embraces any type of arcade-style sense of competition is if you pass the same Nintendo Switch console around.

One area where Super Destronaut DX-2 better excels is on the presentation side. This is one of the most beautiful and explosive 2D shooters I think I’ve ever played, and a lot of it is down to how your tactile actions are portrayed on screen. Every battle is an opportunity to indulge in an entire firework display’s worth of explosions and pixel bursts, both of which fill the screen with blooms of vibrant colours. Such visuals really are a feast for the eyes.

Also aiding this great sense of feedback are a handful of other visual flairs. Chromatic aberration, for instance, gives extra flourishes to all the light and colours that bounces around onscreen, while screenshake can be quite aggressive whenever you create a massive explosion. Obviously, the fear with features like these is that it can potentially get a bit too much – hence why Super Destronaut DX-2 is better played in small chunks. That being said, both elements can also be switched on/off in the options menu.

In the end, Super Destronaut DX-2 is a solid but safe 2D arcade shooter. Sure, it does amazing things with challenges, modifiers, and visuals, but it is a little lacking in content. And the absence of any local or online leaderboards is baffling in a game like this. None of this takes away from the absolute joy of trying to hold out for as long as possible, going toe-to-toe against an avalanche of aliens.

Super Destronaut DX-2 is about as colourful and manic a 2D arcade shooter as they come. What it lacks in content and competitiveness it more than makes up for with great style and tactile feedback.