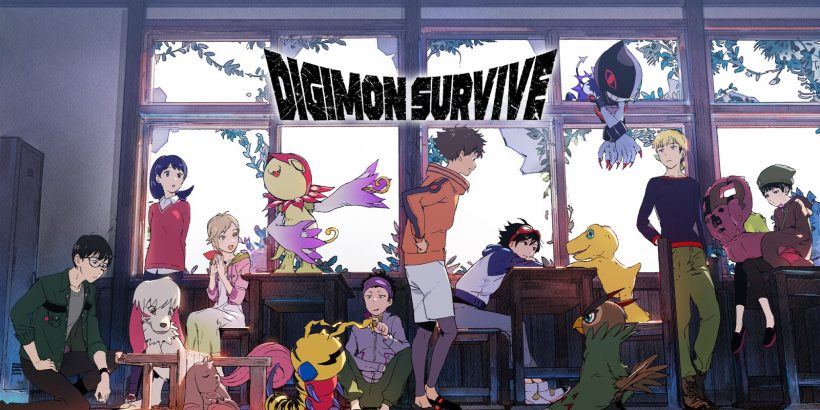 What would you do if your best friend was a tiny T-Rex that could talk?

That question, and more, are answered in publisher Bandai Namco’s Digimon Survive. Back in the 1990s, before cell phones and the internet were truly available to the masses, keeping children entertained was a tough job. Luckily for children around the world, Japan existed, and they invented tiny pets for kids to carry around in their pockets. And thus, the Tamagotchi was born.

Shortly afterwards, after deciding that Tamagotchi were a bit too “feminine”, Digimon came into being. Because, what could be more “manly” and cool than raising a little monster that you could then make fight other little monsters? Annoying gender-dichotomies and biases aside, we have that little virtual pet to thank for the 2022 release of Digimon Survive, a visual novel with a smattering of TRPG battles starring everyone’s favourite digital monsters.

Digimon Survive begins with an amazing fully animated opening that will make you wonder if you accidentally booted up  Crunchyroll. The anime’s production value is superb, and soon we’re told that it’s time to grab our things and get on the bus for the school field trip.

Stepping into the teenage shoes of our protagonist, Takuma, we visit an ancient temple in the middle of nowhere dedicated to the mysterious Kemonogami, or “beast gods”. Our intrepid group is eventually spirited away to a parallel land inhabited by Digimon.

Digimon Survive is mostly a visual novel, so gameplay consists of reading text. The game is almost fully voiced in Japanese, so if you’re trying to learn the language you can let your ears absorb all of the fine acting. Otherwise, get your clicking-finger ready for the standard visual novel journey of advancing the text.

The rest of the time players will be either directing their mons through a few tactical battles, or holding up Takuma’s cell phone and moving it around in search of clues.

Every gameplay element in this game feels just a bit too slow and a bit too easy. Even if you have the text speed set to fast, the pace seems to drag. Hovering and sliding the cell phone around the screen is clunky and feels laggy and, sometimes, when you hover over the flickering sections you’re meant to investigate, the game will take a few seconds to “focus” in on it.

The battles have the promise of those fun, turn-based grid battles we all know and love from games like Fire Emblem or Final Fantasy: Tactics, but they suffer from poor design most of the time. Even if you set the battle speed to its fastest level, you still have to navigate several menus to first move, then attack, talk, evolve, and eventually end your turn. Then you need to choose the direction your mon faces. It’s exhausting just trying to explain it!

Battles suffer from too much talk and not enough action; enemies are usually two or three moves away, and once you get there, they only take a few hits to take down.

There is a talking element in battles that can provide some challenge: you can talk to any monsters you are fighting in an attempt to get them to join your team. The monsters ask you three questions; answer correctly, and you’ll have a slightly better chance of them joining you. Answer incorrectly, and you’ll give them a buff for the battle against you. The questions, answers, and monster personality don’t seem to add up most of the time. On top of that, even answering perfectly is no guarantee you’ll get them on your team. So while this aspect is difficult, it’s because of annoying RNG rather than the challenge of a well thought-out puzzle.

Because the party Digimon (like Takuma’s friend Agumon) talk and have their own personalities, I found it difficult to care about the random ones you can recruit to your team in battles. I found it more satisfying to stick with the base monsters in the majority of skirmishes anyway.

The visual novel story is fun, quirky, intriguing, and kind of dark. Though, at times, some of the characters’ personalities get in the way of enjoying the story; it’s hard to care about a character who is constantly afraid of everything, always tells you either to shut up or how dumb you are, is mean to the digimon who loves him, and doesn’t seem to possess any inclination to change or better himself.

One neat aspect is that the fates of the characters, the evolution of Agumon, and the story ending itself all have many possibilities depending on the choices you make and how you treat your fellows. So there is plenty of content to keep a Digimon fan happy for many hours.

The graphics and audio are really top notch in the visual novel aspect of the game. The TRPG battles aren’t mind blowing, but they serve.

All in all, if you’re craving a visual novel that lets you take a quick battle-break every now and then, Digimon Survive would be worth picking up. If you loved Digimon as a kid, you’ll likely find enough nostalgia to keep you entertained. If you’re simply craving the next TRPG to sink your teeth into, you may want to look elsewhere.

Digimon Survive is a graphically pleasing visual novel with a very light sprinkling of TRPG gameplay. The characters are a bit static, the gameplay can be quite slow and a bit too easy, but the mons are cute and the story can be engaging at times.