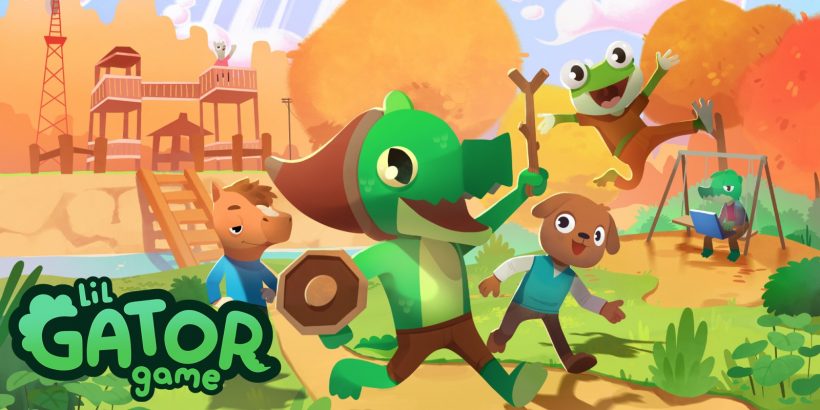 I’ve had the pleasure of reviewing many different kinds of games during my time at Switch Player. Some have had enthralling stories that left me on the edge of my seat, others, complex gameplay mechanics that had me scratching my head. I’ve enjoyed many of these games, but none have had me smiling as much, nor hit me quite as hard, as Lil Gator Game.

That’s not something I expected to be saying when I first booted this game up. I like to think that any prejudices I once may have held against “cutesy” games such as this dissipated alongside my moody teen years; however, I did just expect this to be a fun little adventure. It certainly was that, but it also carries with it a surprisingly emotive and relatable message that will no doubt have players doing some soul-searching.

The basic premise of the game is simple enough. Playing as the titular Lil Gator, you must journey around an island that’s been turned into a gigantic playground, recruiting all your friends to join in one massive game together. The ultimate goal is to impress your older sister, whose days spent playing make-believe seem to be long since behind them. Along your journey you’ll unlock various items that aid in your quest, be it a stick to fell your enemies, or an old shirt that acts as a paraglider; it’s all standard adventure game fare… to a point.

When you first start playing, this game feels almost derivative. However, its unique identity soon becomes clear. You see, whilst yes, Lil Gator Game has plenty of features similar to that of many adventure games (including a particular Zelda influence I’ll touch on more later), the way it presents them is wholly unique. For example, the items I mentioned above are hardly that of a mighty adventurer, instead, the game leans heavily on the perspective of its child protagonist. Kids have the biggest imaginations and Lil Gator Game uses that notion to full effect.

It’s the charm and heart evident throughout this game that makes it feel like the gaming equivalent of being enveloped in a warm hug. From the haphazardly yet lovingly crafted cardboard monsters scattered throughout the island to the sweet interactions you have with the islanders, everything just feels incredibly wholesome. That’s maybe a term thrown around too often these days, but Lil Gator Game is the very definition of wholesome!

I mentioned previously that The Legend of Zelda’s influence is obvious here; essentially this game is Breath of the Wild and A Short Hike rolled into one outstanding package. The Zelda references come thick and fast throughout, but it never feels as though Lil Gator is leaning too heavily on these references for support. It carves its own identity whilst paying respect to its influences. What’s more though is that said influences give the game a greater sense of scale. The quests you partake in are all incredibly basic, yet when viewed through the perspective of the child protagonist as being one big game, it all feels a bit grander. Whipping out a costume similar to that of Link’s, or brandishing a mighty sword and shield, provides an epic make-believe feel.

It’s not just all fun and games though, as Lil Gator Game carries with it a rather profound message. To say too much would be to spoil the effect of the game, but it’s great to see the evolution several of the key characters go through. Nothing is black and white either, with one particular ideal coming out on top; instead understanding and communication are the name of the game. It’s a message that bares repeating the more turbulent things become here in the real world, and it’s refreshing to see a game such as this succeed at being something more. This could have easily just been a cutesy Zelda-inspired adventure and would have gone down perfectly. In attempting to go that one step further though and having some meaning behind the gameplay, Lil Gator Game is elevated to a whole new level.

There’s really very little to say against Lil Gator Game. I encountered the odd bug and performance stutter, but these were few and far between and didn’t do anything to hamper my enjoyment of the game. The main bug I encountered saw me bouncing across the map and, if anything, further reinforced the goofy nature of the protagonist. It’s impressive when even the bugs are charming!

Perhaps the game could do with a little more direction. You unlock certain items once you finish the story that will guide you to 100% completion, but some in-game tasks can be quite tricky to work out. Some of these solutions were fairly intuitive, however, there were a couple where I was completely stumped, and the in-game hint wasn’t quite sufficient. It works against the overall fluidity of the gameplay, as your traversal and actions through the world meld seamlessly.

Lil Gator Game is a title overflowing with heart, and it’s clear the level of care and attention that has gone into every part. It’s a refreshingly short yet meaningful adventure that stands as the perfect way to cap off 2022!

Lil Gator Game is a shining example of a game with a brilliant premise realised to its fullest extent. Full of heart, humour, and heaps of fun, this quality release simply cannot be missed.