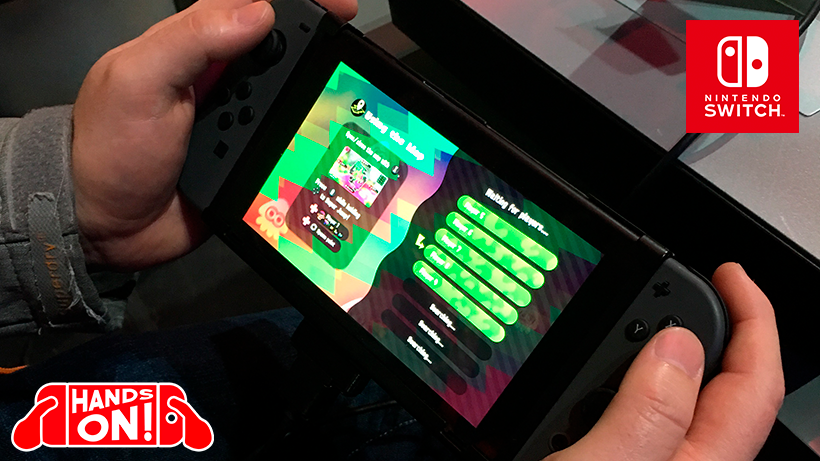 Read Paul’s thoughts on the Nintendo Switch from the recent hands on event in London.

I really didn’t know what to expect as I waited in the rain outside what used to be the Hammersmith Apollo. Many of the journalists in this very magazine had already managed to get their experiences with Nintendo’s newest system, and some of them had even fed back their thoughts – but as I was still awaiting my turn, I didn’t quite know what I’d find.

Much of the optimism which was fuelled by an outstanding teaser back in October had been replaced by a mood not too dissimilar to the weather accompanying me, hanging over me whilst I waited for the venue to open. A lacklustre launch offering, a less than stellar overall line-up, and some extortionate pricing hasn’t painted a particularly enthusing picture of what could be the make-or-break product for Nintendo (especially on the back of the Wii U’s failure).

As I walked in through the corridor – which was filled with every system that Nintendo have released – I was trying to taper both my expectations and my nostalgia. Nintendo have always managed to feed from the long-time love from their fans, and it is no different for me. Every time I think that I am done with supporting them, they somehow manage to reel me back in. I suppose that this was a fitting way to introduce you to their latest creation. 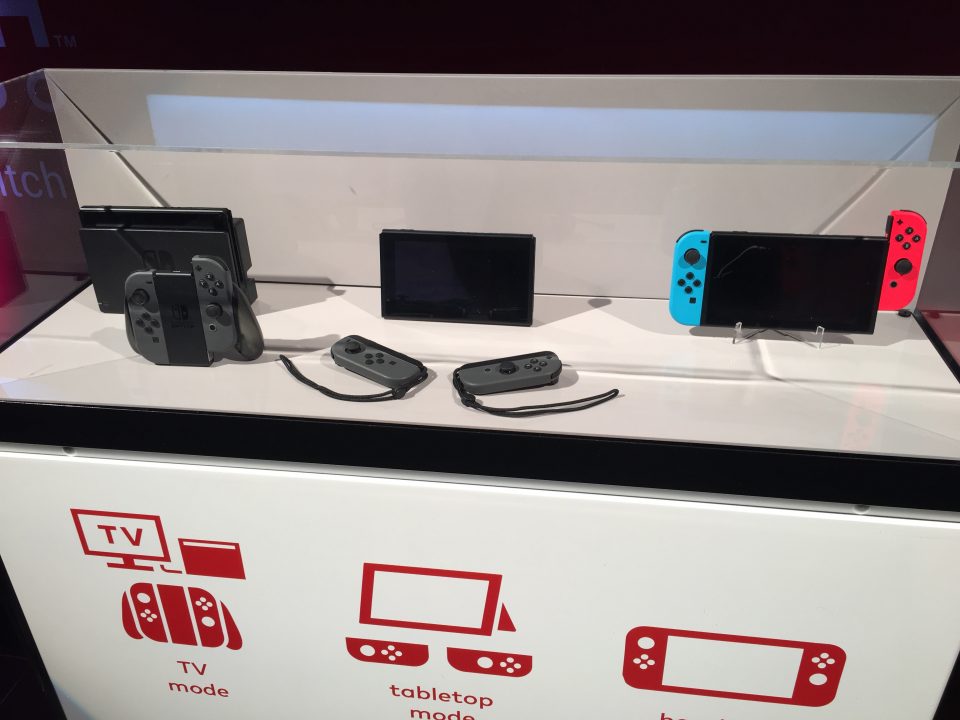 It was then, at the end of the row, that I got my first look at the Switch – encased in glass with the multiple controller set-ups that you can experience. My first reaction? This thing is beautiful. And small. Of course, it isn’t that small, but it’s smaller than you think in person. The Joy-Cons seemed incredibly twee, and the Joy-Con grip had neither the width or girth (now, now) that I expected from looking at static images on the internet.

After a brief delay, Nintendo let us loose and I made a bee-line for The Legend of Zelda: Breath of the Wild. I only had four hours to get through as much as I could, and I didn’t much fancy my chances later. After a brief wait – exacerbated because I wanted one of the consoles with the removable handheld unit – I finally got to sit down with the system. Playing first with the Switch Pro controller I was soon running amok in The Great Plains of Hyrule.

I’ll save my Breath of the Wild thoughts another hands-on, so much of the focus of this piece will centre around the system itself – and where better to start than with the controller. The pad was incredible comfortable, fitting, and moulding around my hands with ease. The buttons were all logically placed, and I had no problem navigating around my environment. There was also some very satisfying feedback through the pad, though only when appropriate.

A few minutes into play came the moment I’d been waiting for; the removal of the unit from the dock. Carefully holding this thing by the Joy-Cons and easing her (yes, I’m calling the system her) out, I noticed as immediately the signal from the television was lost and the screen on the handheld ignited. I was prompted to press the left and right bumpers followed by the A button, and then BOOM: instant transition. One of the things I was most worried about was rebuked and dealt with in a heartbeat.

I spent the remainder of the time with Breath of the Wild, utterly mesmerized with how amazing it all looked. Every blade of grass, every branch, the draw distance, the environment; all of it was reproduced beautifully on the stunning 720p screen. If anything, I’d even go as far to say that it looked BETTER on the handheld’s screen than the TV. 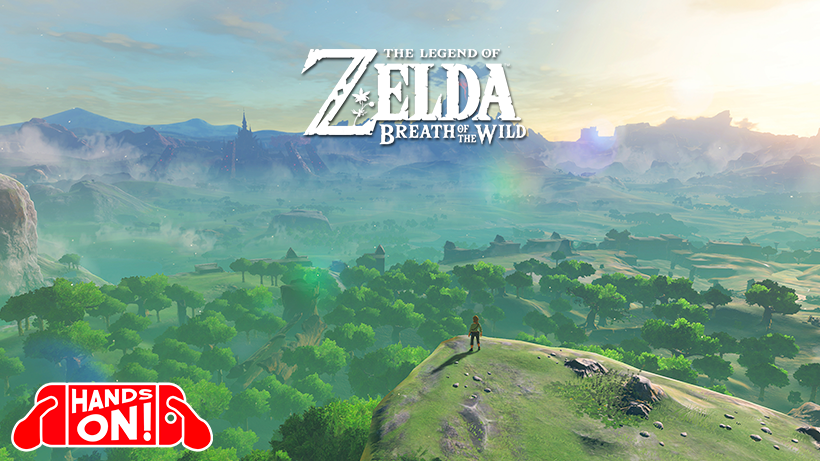 The control method with the native Joy-Cons took a few seconds to get used to however, mostly because of the slightly different alignment, and the larger gap between the two halves of the controller than I’m used to. Whilst trying to concentrate on Link’s latest adventure, I was also trying to take in everything about the hardware that was in my hands.

I’ve seen a few things mentioned on the weight of the system, but for me it was perfectly balanced. The unit itself is manufactured to a high standard; this feels like a premium product, which is not something you can say about Nintendo’s recent handhelds while maintaining a poker-face. The feedback filtering through the Joy-Cons was very impressive, and the Joy-Cons themselves have a robustness about them despite their diminishing size. This is something that feels like an expensive gaming console, which is handy since it is.

Soon, I moved on to Splatoon 2 – and played purely on the Switch handheld itself. By this point I’d really managed to nail the system, but – as existing Splatoon players know – the game also utilizes gyroscopic aiming… and that was here in all its glory. I set off with seven other attendees alternated between docked and undocked systems, and immediately fell in love. The aiming worked perfectly, the game ran fluidly, there was no evidence of lag, and my team managed to win. What wizardry was this? After a brief soiree with Mario Kart 8 Deluxe (which is fantastic, but more on that another time) I found myself with Arms, which is one of the more unique of the announced Switch titles. Arms is a brand new IP from Nintendo and is a fighting game which sees you holding a Joy-Con in each hand. These little controllers then serve to act as your fists, responding as you gesture accordingly to defeat your opponent. It was certainly one of the more fun things to do and is genuinely interesting in action, as well as a lot of fun. Various gestures were played out on screen; with punches, grapples, and blocks all executed with precision by the little controllers. I also learned (after the event) that it can also be played more traditionally with manual controls, saving those with aching limbs from flapping their arms around like Kevin and Perry.

Sampling some of the third-party offerings allowed me to experience the Joy-Cons in their grip holder, and I was amazed with how comfortable it was. It’s a lot smaller than you may think, and personally I felt it was much easier for you to hold and use than the more expensive (and sold separately) Switch Pro Controller.

Playing Super Bomberman R also gave me the opportunity to use a single Joy-Con. It was here, playing the multiplayer game featured in the original teaser, that the first hint of disappointment arose. I was using the “Right” Joy-Con (the one with the analogue stick in the middle) and I found it to be a little uncomfortable if I’m being quite honest. I’m sure it’s something you’d get used to with regular play, but the awkward placement – combined with my tiny hands – means that my explosion-obsessed little buddy didn’t always go where I wanted him to. It was also my first opportunity to play the Switch in Tabletop Mode, and once again I’ll be completely honest; with the small characters, and so much going on, it probably wasn’t the best example for the feature.

The next game I had to tackle was 1-2-Switch. One of the most compelling examples of a title that should have been a pack-in, 1-2-Switch is a series of ludicrous mini-games themed around using the Joy-Cons and experiencing the HD Rumble. There were quite a few to tackle, but I only managed three in the end…so I’ll start with the best.

In Quick Draw you’re encouraged to face your opponent. You hold the Joy-Con by your side, as if your pistol was holstered, and wait for the signal to draw. Upon hearing the command, you must lift and then “shoot” your opponent by pressing the trigger. The result will then appear on the screen, with your reaction time and angle.

Next up was Safe Crack, and the aim is to beat your opponent to the safe combination. By rotating the Joy-Con you are feeling for the vibrations to change when you find the right pin, and then holding the position to lock it in before repeating.

The last one I got to try was Milk, which was completely ridiculous. Years of misspent teenage years with Razzle and Escort served me well as you need to rapidly move your arm up and down whilst squeezing the triggers alternately. Basically, you feign milking a cow, whilst the game’s audio constantly encourages you to “fill that cup”. Maintaining eye-contact with the chap sitting across from me was quite awkward…

As an introduction to how well the technology in the Joy-Cons work you can’t fault 1-2-Switch, but it smacks of something that should have been free in the box. From what I’ve seen there’s little to justify that £40 price tag now. It was at this point that a voice came over the PA system, announcing that my time was up.

What I had learned about the Switch in this short time? I learned that it is an awesome a piece of technology, that the screen is luscious, and the whole thing is a polished piece of kit that feels incredibly expensive. The Joy-Cons work very well overall, and the technology behind them is rather impressive. The weight is balanced well, and the system overall is smaller than you probably think it is. It’s bigger than a Vita, and the screen unit is around the size of a closed 3DS XL. Just add the Joy-Cons. Or for another comparison; it’s slightly wider than a Wii U Gamepad, but not as tall. 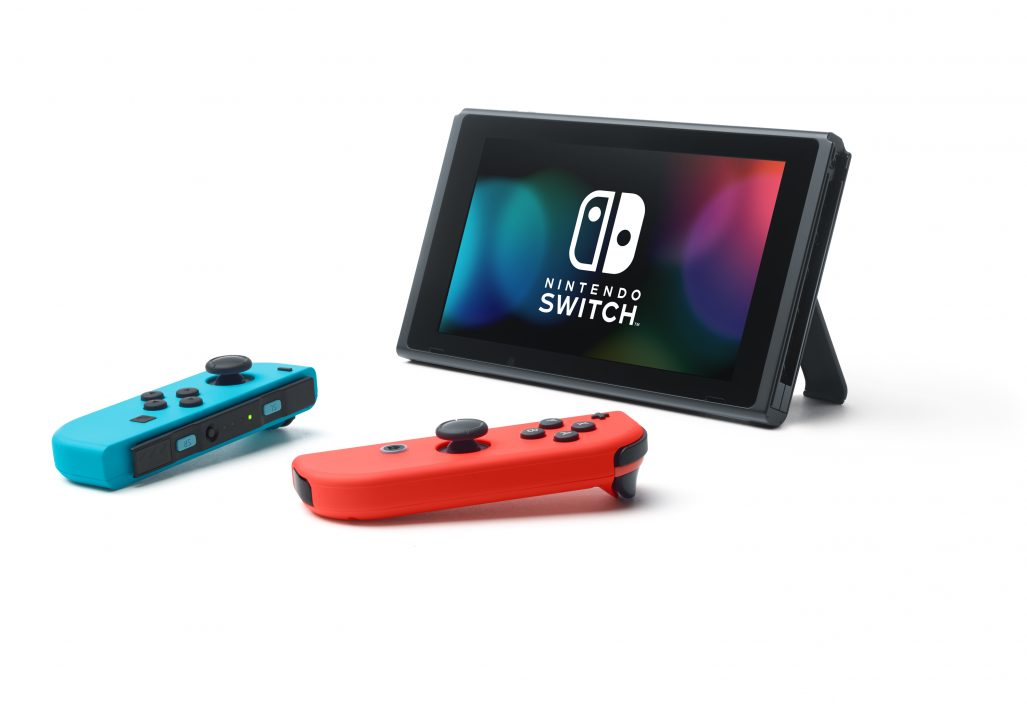 The Joy-Cons worked well in the grip add-on, and are arguably more comfortable in that than the Switch Pro Controller was, so that’s worth bearing in mind if you want to avoid paying silly money for one of those.
The docking wasn’t as natural as I’d hoped, but that could have been because of the chain attached to stop people thieving the units. It seemed to me that the fit was very tight, however lifting it out was easy and the screen instantly sprung to life on the portable system.

I had already pre-ordered my system before the event, and my limited time with the device has made me want the thing even more. We can talk all day about what games this will have (or not) at launch, but all I really want to talk about is how much I want it. Now.

One thought on “Nintendo Switch Hands-On”