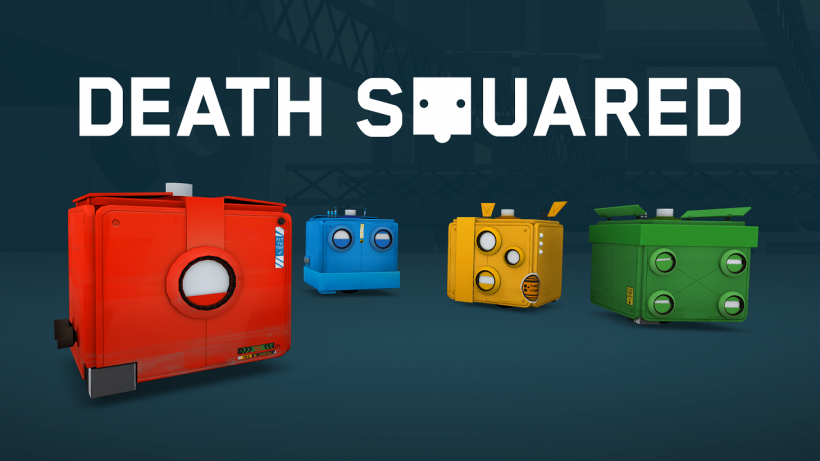 Who needs enemies when you’ve got friends…

SMG Studio’s Death Squared is all about co-operation. Make the wrong move and you will undoubtedly face death. Luckily, the cubes that you and up to three friends will control during your time with Death Squared are not irreplaceable – which is a veritable sigh of relief when you see how many of the little robots you have wasted via the death counter in the corner of the screen.

The two main modes that will take up the majority of your time are “Story” and “Party”. Story mode follows David – an AI tester for Omnicorp – and his interactions with an AI named Iris. The story is told through humourous dialogue between the two, which plays out both in between and during levels. Other devices used to add to the whole “test lab” feel include David occasionally reading (and poking fun at) some of the emails he receives during his working day. The interactions between these two characters is great, and the rapport between them makes the story worth listening to as you’re playing. There are even a few fourth-wall breaking quips that you will hear if you’re not doing too well on a level, or idle for too long. Sure, it’s no Shakespeare, but as far as puzzle games go it’s good fun, and it certainly adds to the game’s overall feel.

There are eighty levels for you to get through in the Story mode – and although they start off relatively simple, you will soon find yourself truly tested. The aim of the game there is to get both of the blue and red coloured AI cubes to a circular pad of corresponding colour, and while this does not sound or seem too difficult at first, the challenge will soon ramp up. As you progress through the stages you will find coloured pressure pads that need to be activated, using the same coloured AI cube to raise platforms to help you progress. Stepping on these too soon or too late however, could cause hazards to activate that will put your other companion in danger. Something that you will soon learn is that trial and error plays a big part in Death Squared. Just as you think that all is going well, you will move one of your AIs the finish line a moment too soon and look on helpless as the other gets destroyed by a laser, spikes or by getting knocked off the map – forcing you to repeat the test again! 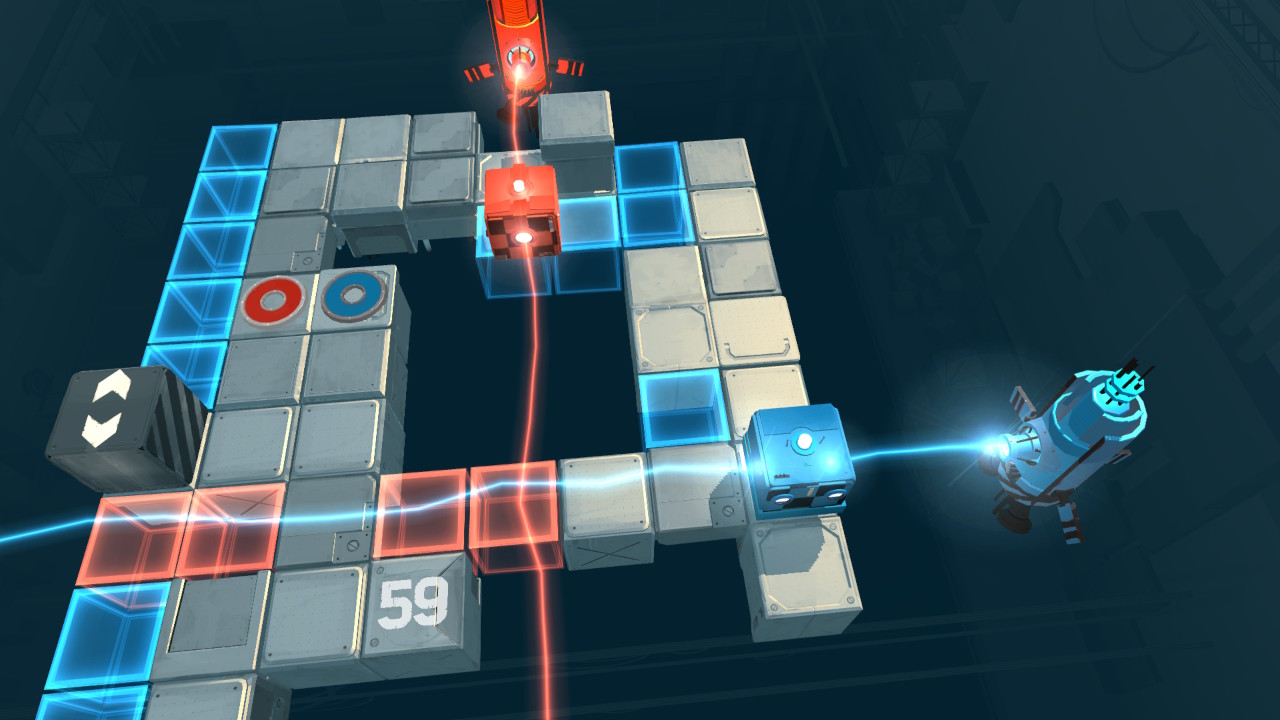 Luckily, the puzzles are very intuitive. You will find coloured lasers that are harmful to AI cubes of a different colour blocking paths through a stage, but you can use an AI of the same colour to act as a human shield of sorts to block the laser and allow others to pass. You will also get introduced to holocubes as you progress – the coloured blocks allowing AI of a same colour to pass through them, but those of a different colour cannot. Using this logic, you will soon find come across coloured holocubes in place of the usual grey floor tiles, and crossing these as an AI of the same colour will see you fall to your death. To pass through these unique variants an AI of a different colour must be used, bridging the area for your other cubes. Needless to say, you will need to keep your wits about you!

Party mode sees you take on stages similar to those in Story mode – minus the actual story. This time there are four AI cubes (the aforementioned blue and red are joined by green and yellow) that need to get through forty stages, each built specifically to accommodate the extra additions. There is also an option on the title screen called “Vault” where you will find additional stages that were deemed a little too brutal for the other modes. The stages held within this mode are split based on the above modes, and will only unlock once you have beaten all the stages in the respective Story or Party mode.

You can experience all of the content in Death Squared on your own, and I found myself playing the majority of the Story mode on my own – switching between docked and handheld mode on my Switch. Control wise, in Story mode the red and blue AI are assigned to the left and right analogue stick respectively, and in Party mode the yellow joins the red on the left stick and the green joins the blue on the right. Holding the corresponding Z trigger will toggle which AI you control and the eyes (which also indicate the player number) on your little cuboid characters will open or close to show which you are currently in control of. 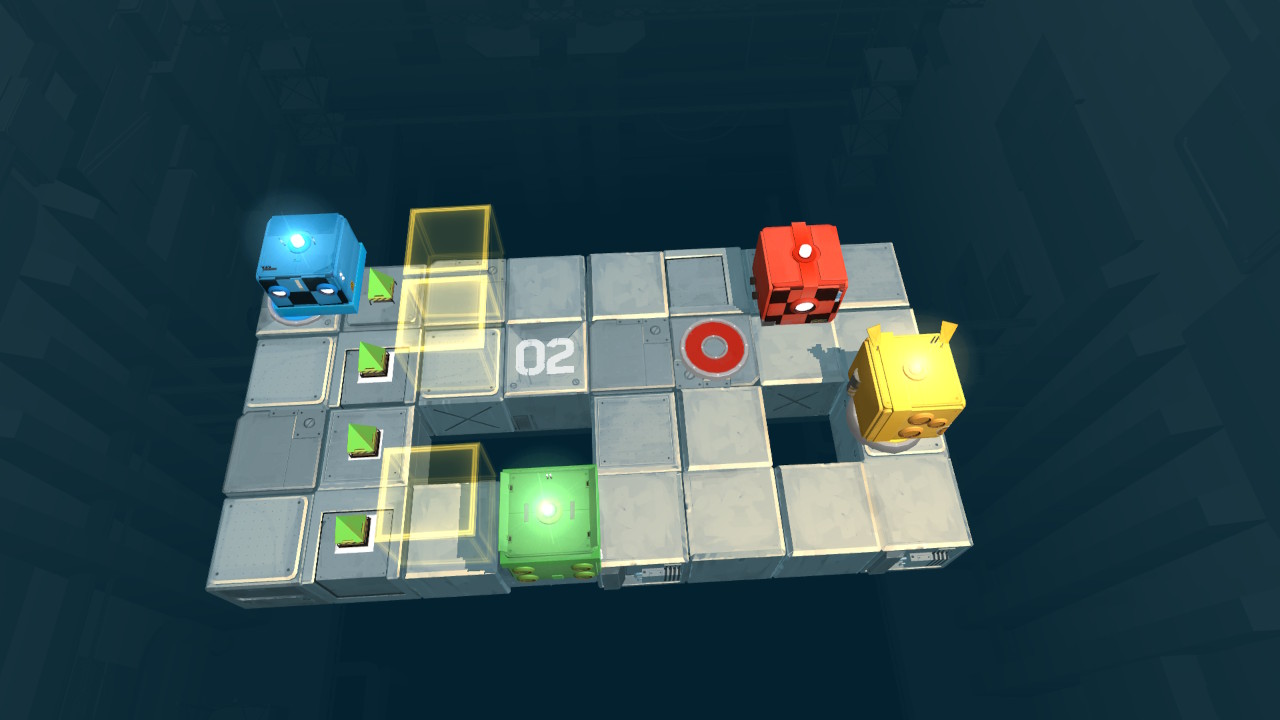 However, if you really want to get the most out of your experience with Death Squared you will want to play as much of the game as you can with a friend or three. You will find that you will argue among yourselves over the best solution to beat a puzzle, and then that you’ll screaming at each other and howling with laughter when your solution fails and you send your friend to an early death. The game is all about these AI cubes working together to complete the tests after all, so surely it will be better if you work together with a friend? Well, maybe not quite as well as planned – but get your Switch set up in docked or table top mode and you will find yourselves losing hours whilst you see how well you can co-operate.

I have really enjoyed my time playing Death Squared, and I think most Switch owners that pick this up will feel the same way. With the mix of humour and puzzles, Death Squared reminded me a lot of Valve’s Portal series – certainly not a bad series to be compared with! The only thing that I worry about with this game is its replay value. Once you have beat the stages that are on offer, there doesn’t seem to be much incentive to go back and play them again. Sure, I could go back and try to beat the time it took to clear a stage, or to try and get through it will less deaths (both of these things are displayed next to each level); but there isn’t anything to compare your records against. I feel that the addition of online leaderboards here could certainly entice players to revisit these stages, and it does seem a strange omission.

In the end though, this doesn’t detract to much from the initial fun you will have with this game, and I would recommend this title to anyone that likes either co-op games or the puzzle genre. You will not be disappointed! Play with friends and watch the chaos ensue, or drop in and out of the game for some solo fun – either way you will find a fun, charming game that is very addictive and has that “one more go” effect that makes it hard to put down!

Death Squared is a great example of how the Nintendo Switch can bring players together. Hand a friend a Joy-Con and watch the hilarity ensue. Good fun as a single player experience but better with friends, Death Squared mixes challenge with humour in a way that makes it very reminiscent of Portal – and if that isn’t reason enough to give this game a look, I don’t know what is!