When it comes to video games, I’m about as nostalgic as they come. You’ll often catch me flicking through the pages of a 90’s gaming magazine, or swearing in frustration as I fail at Ghosts ‘n Goblins for the millionth time. I jumped on the opportunity to own a NES Classic Edition, and will no doubt buy Super Mario World again at some point on the Switch. So when I heard about Namco Museum, I just had to experience what was on offer.

Included in Namco Museum is a fairly generous offering of 11 games. These are Pac-Man, Galaga, Dig Dug, The Tower of Druaga, Sky Kid, Rolling Thunder, Galaga ’88, Splatterhouse, Rolling Thunder 2, Tank Force and the much desired Pac-Man Vs. Whilst on paper this is a really solid line-up, there are a few glaring omissions – such as Xevious or New Rally-X. At the same time, you can’t help but feel that they will be included in an inevitable Namco Museum Part 2 (should this release sell well enough). 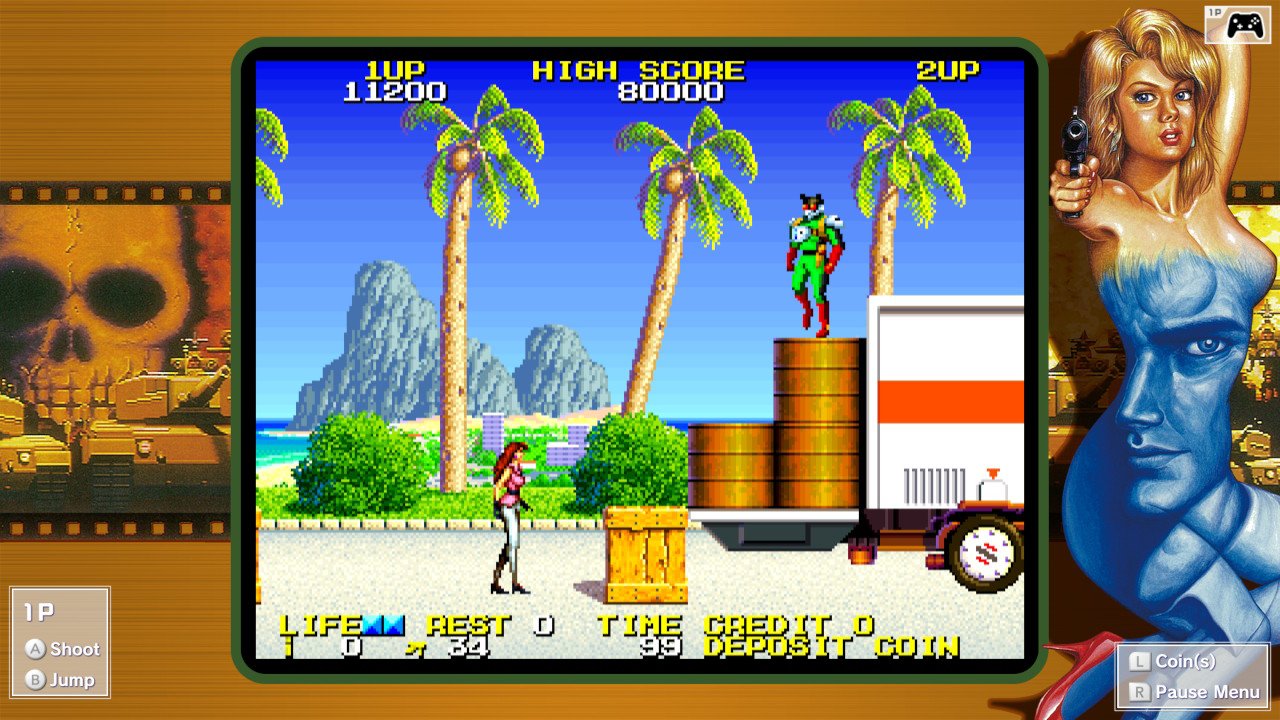 Each of these games genuinely offers you hours and hours of entertainment, and there is a fair amount of variety to be had; from shooting ships in space, to smashing monsters over the head with a 2×4 in a haunted mansion. Whilst Namco can’t offer the lovable IP’s that Nintendo themselves can offer, their classic library has just as much diversity to keep you entertained when you want your pixelated fix.

As with a lot of older games, they’re also extremely difficult; at least, by today’s standards. For new players experiencing classics like Splatterhouse or Rolling Thunder for the first time, it’ll likely take them a good few continues before they get past the first few levels – or even the first few screens. Keep your coins in your pocket, for as luck would have it each depression of the L button inserts a new coin for another fresh start.

The main attraction in the collection (at least as far as Switch owners are concerned) is the inclusion of the reworked 2003 release; Pac-Man Vs. In this former GameCube-exclusive, player one controls Pac-Man whilst the other three players control the ghosts in the maze. What was once achieved by multiple Game Boy Advances, a heap of cables, and a GameCube console, can now be enjoyed with just a single Nintendo Switch. 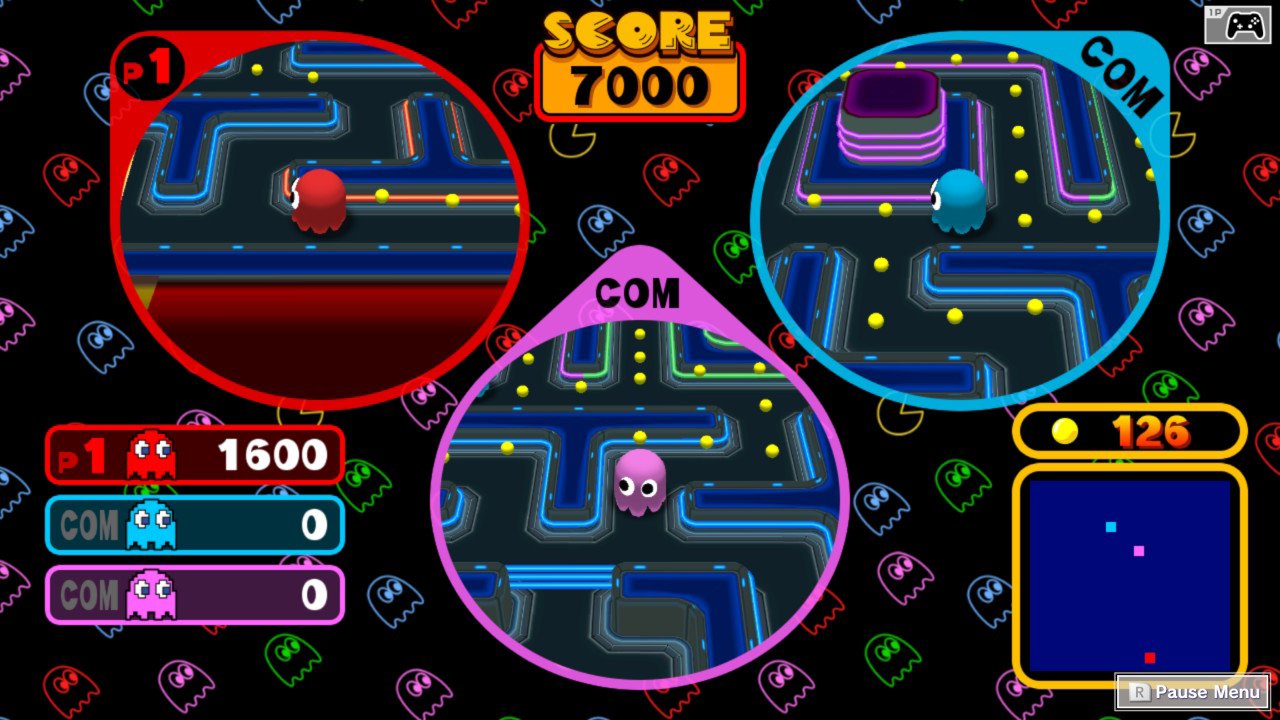 Multiple Switch consoles linked together allow all the ghost players to use one screen with a limited view of the maze, whilst whoever controls Pac-Man has a screen and a full-view of the maze to themselves. Whichever ghost manages to catch Pac-Man gets to control the yellow chomper in the next match. It really is fantastic fun, and has proved to be yet another superb party game on Nintendo’s console – perfect to dig out when family or friends are around.

Where Namco Museum really excels however, is with the extra touches that it offers. You’ve got multiple different display options – including the ability to rotate your Switch in handheld mode 90 degrees, to then play on a vertical screen (like some of the arcade cabinets from their day). You can also add scan-lines to get that lifelike CRT feel, and increase the size of the screen as much as you want. Additionally (and perhaps most importantly), each of the games includes an online leaderboard where you can compete against other players around the world. A big part of arcade gaming is focused around high scores, and this is a nice way to add some longevity to the package. 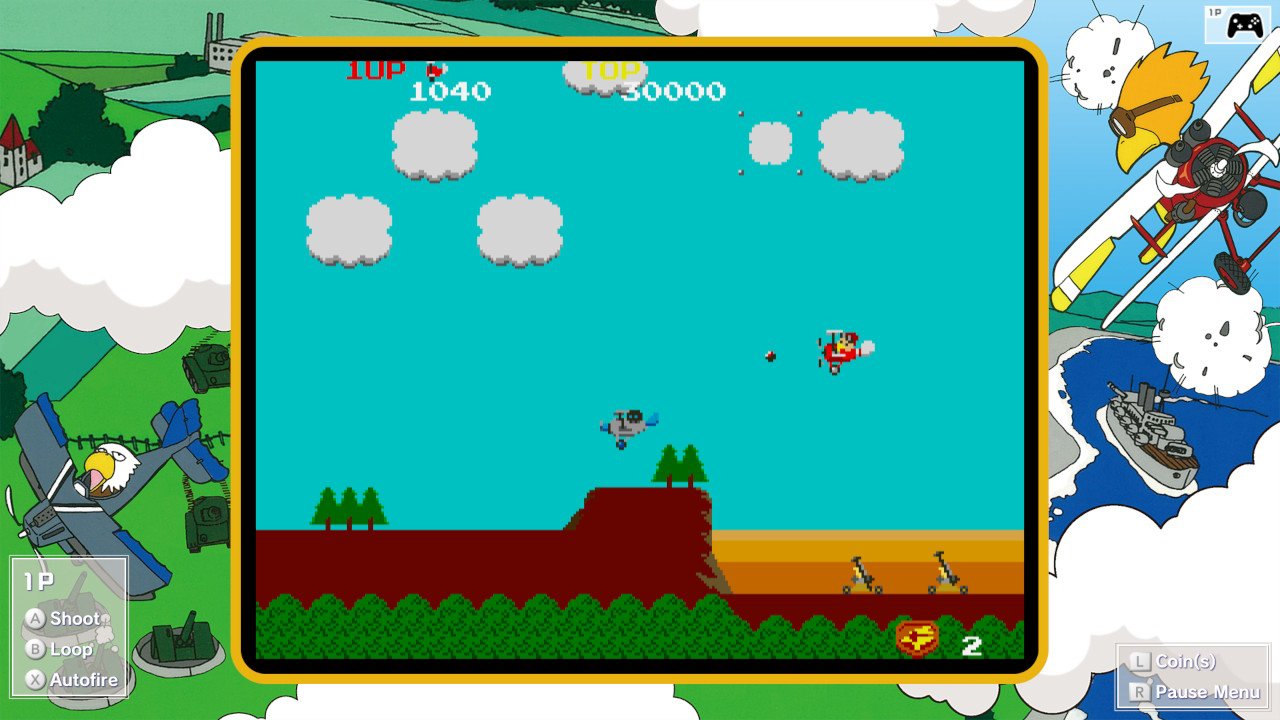 Save states are included – both manually and automatically, but curiously you only get the option to store one save file per game. It’s not a huge deal, but it is somewhat limited, and may restrict your progress on some games. Too many states would be unnecessary, but I don’t think it is unreasonable to expect a few per title – giving you a little more flexibility in how you tackle your games over time.

With its beautifully designed UI, the biggest compliment that I can give Namco Museum is that it feels considerably similar to the NES Classic Edition presentation-wise. Navigating from game to game is as pleasurable as you’d hope; each title showing you some box art-style visuals, followed by actual gameplay – doing its best to help you decide what to play next.

With Namco Museum now sitting alongside the vast Neo Geo library already on Switch, you’ve got to wonder just when Nintendo is planning on launching their latest reincarnation of the Virtual Console to join the party. For retro fans waiting for this to happen, Namco Museum could be considered somewhat of a stop-gap. 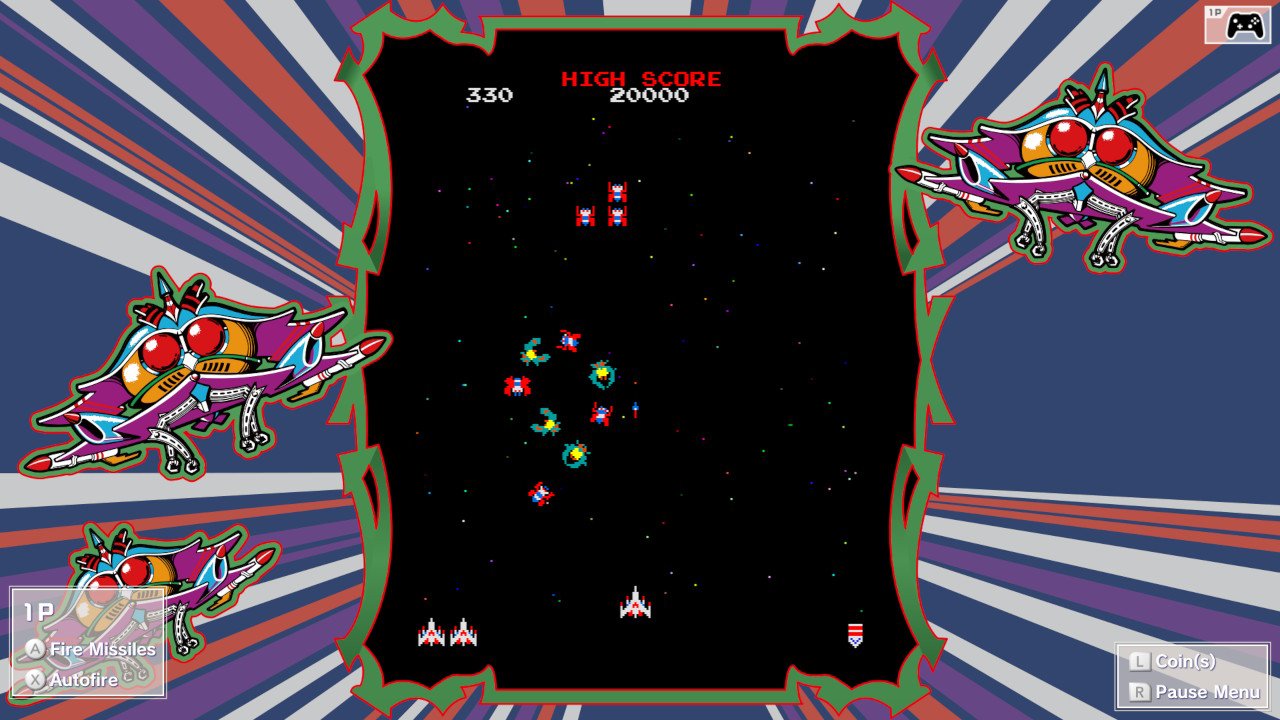 Picasso once said “give me a museum and I’ll fill it.” Namco have built their own museum, but filling it is something that they fall short of. What is on offer is of excellent quality, and clearly a lot of time has been spent presenting these classics in the absolute best light that they can be – but despite this, it all still feels a little light. Whilst no doubt some will pick up Namco Museum just to play Pac-Man Vs., others will simply not be able to justify the price tag.

Namco Museum does a lot of things right – but despite the wonderful presentation, it’s still only focused on a limited audience. Putting a value on retro games can often be difficult given how easy it is to obtain and play these titles elsewhere; that said, Namco have put together an extremely desirable package that fits very nicely on the Switch. If it was cheaper it would be easier to recommend to everyone, but as it stands you’re only likely to pick this one up if you’ve got some retro-tinted specs like me. For those of us who do though, it’s a fantastic trip down memory lane.