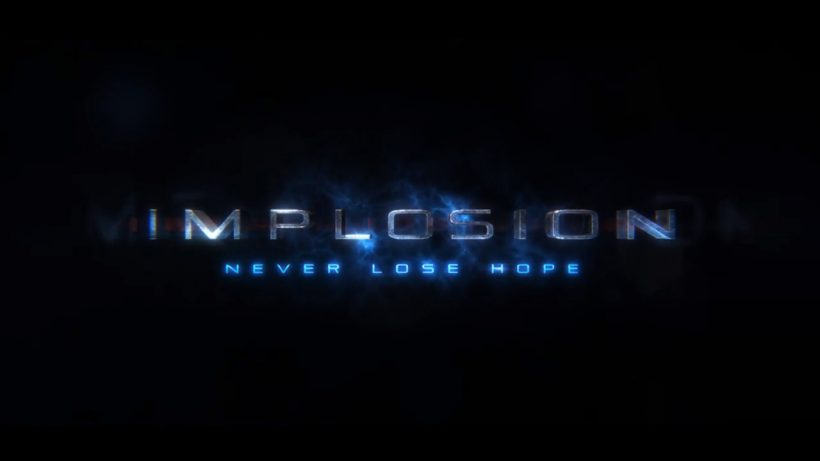 When you start the game and you’re introduced to the very thin story that Rayark Inc. have crafted, you realize that you’re taking control of Jake; a mech pilot who escaped Earth in the wake of the XADA invasion, and has come back in order to kick all their alien asses. You’re introduced to your level 3 mech suit, taught a bit about how your sword and gun work, and then set off to complete objectives in the just over thirty missions contained within. 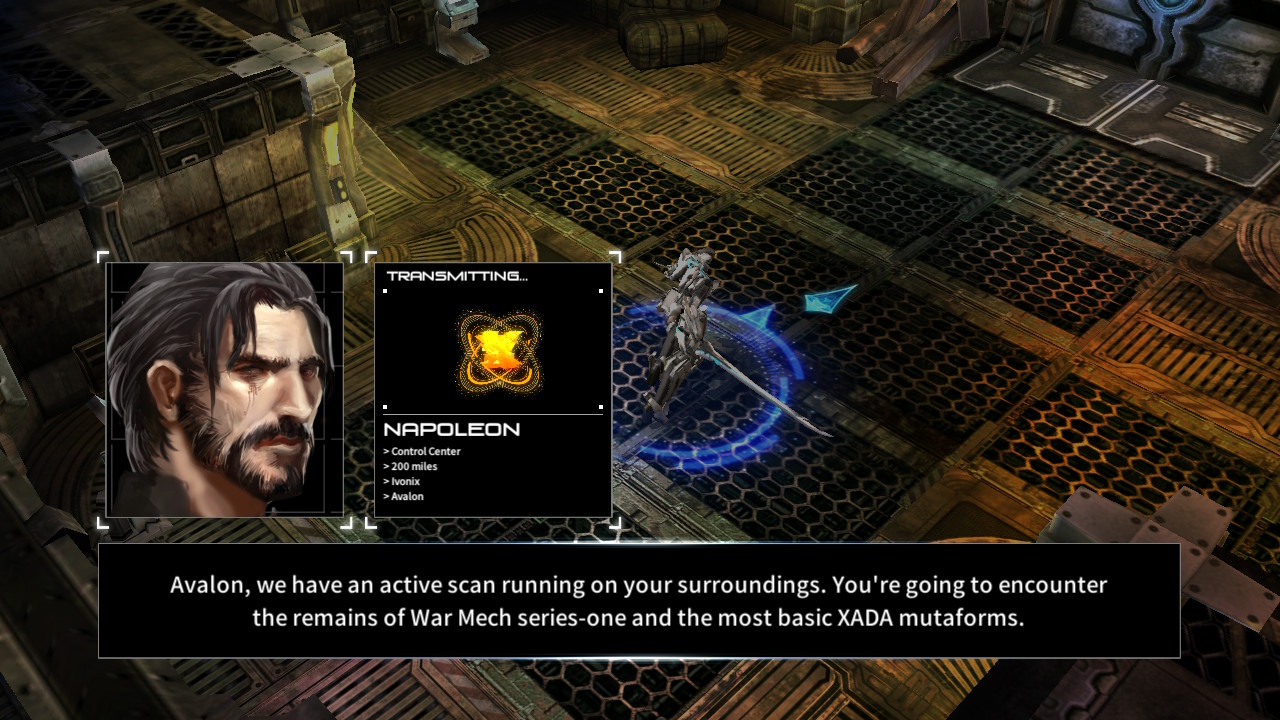 Most missions will have you either fighting your way to a checkpoint or defending an area from invasion, though boss missions where you take on more difficult enemies are situated at the end of each of the game’s four chapters. On your way there however, you’ll regularly be locked in areas with electric fences, or shut in via the multiple doorways – forced to fight a group of enemies before you’re able to progress. Don’t worry if you die though (at least on the easier difficulties), as you’ll be able to revive pretty much in place; the game’s forgiving nature taking a bit of the urgency and danger out of it all.

Fighting itself takes the form of hack and slash gameplay, with a normal and heavy attacks mapped to the Y and X buttons respectively. You can also dodge with B, and if you manage to fill your power gauge enough you can use the on-screen prompts to unleash special attacks based on your equipped Ark fragments. Attacks range from armor breaking swipes, to boomerang-like bouncing energy attacks, or even time slowing area effects – the different specials requiring different amounts of gauge to execute. It’s all very standard for this type of game, though you can of course change things up with your equipped fragments. 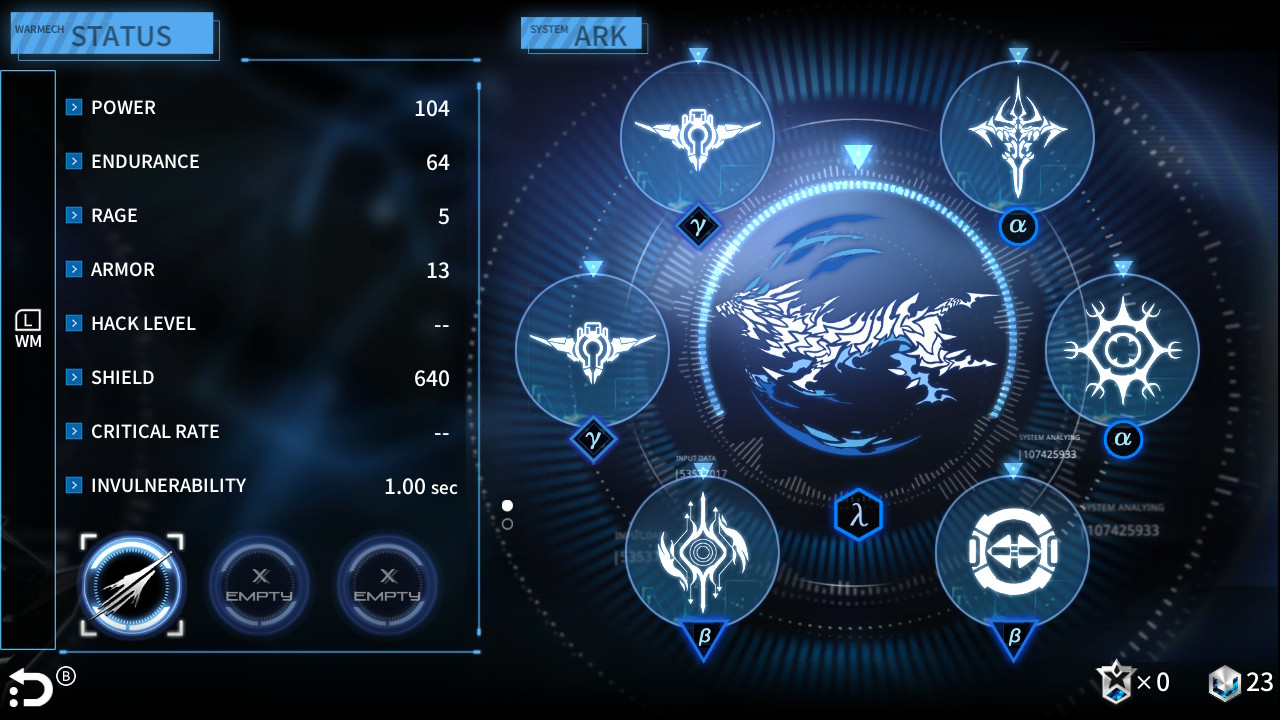 Fragments themselves come in many varieties and you can equip up to seven at a time, with minor fragments accompanied by one that dictates your special attack. You can earn them from missions, find them in supply boxes, or buy them at the store – each having a level requirement and unique effects on your stats.

As for your enemies, they’re fairly bland. You’ll fight zombie-esque creatures called Mutaforms, other mechs, a range of unique creatures, beings resembling the Xenomorphs from Alien, and of course giant boss creatures with heavy attacks. You’ll come up against landmines, fire spouts, spinning fire sprinklers, and spinning saw blades embedded in the floor – but they really aren’t a problem if you’re quick and you pay attention. I’m talking about all of it by the way, not just the traps.

At least it looks pretty though, as the game is quite a looker in many ways. The cut scene art and animation are very stylish, and the effects and textures in the active gameplay are all very shiny and crisp. Some of the areas look really pretty, and though there are quite a few bland bits by design the bits that aren’t so bland really pop. It’s rare to see a game that’s really nothing special in the gameplay sector but also looks this pretty (especially in this genre), but that’s what Implosion is.

Pretty is probably the best thing I can say about Implosion however, as it was fairly mundane to play aside from the boss battles. The story didn’t catch me one bit, and though I really enjoyed the art of the cutscenes they were mostly wasted on me due to the fact that I simply didn’t care about anything that was happening. I’d almost have quipped that the story was an add-on, but it was just too well done art-wise to have been an afterthought. Too bad whoever wrote it didn’t know what a “hook” is.

If you do happen to enjoy your time with the game though (my opinion isn’t the word of God), you will find a fair amount of gameplay content for your purchase. There are Normal, Hard, and Expert modes to take on for the main story, and an unlockable mech suit to aim for if you’re ambitious. You’ll have to complete a certain amount of Badges to get it however, and they’re laid out as tasks you can optionally complete across the story levels. 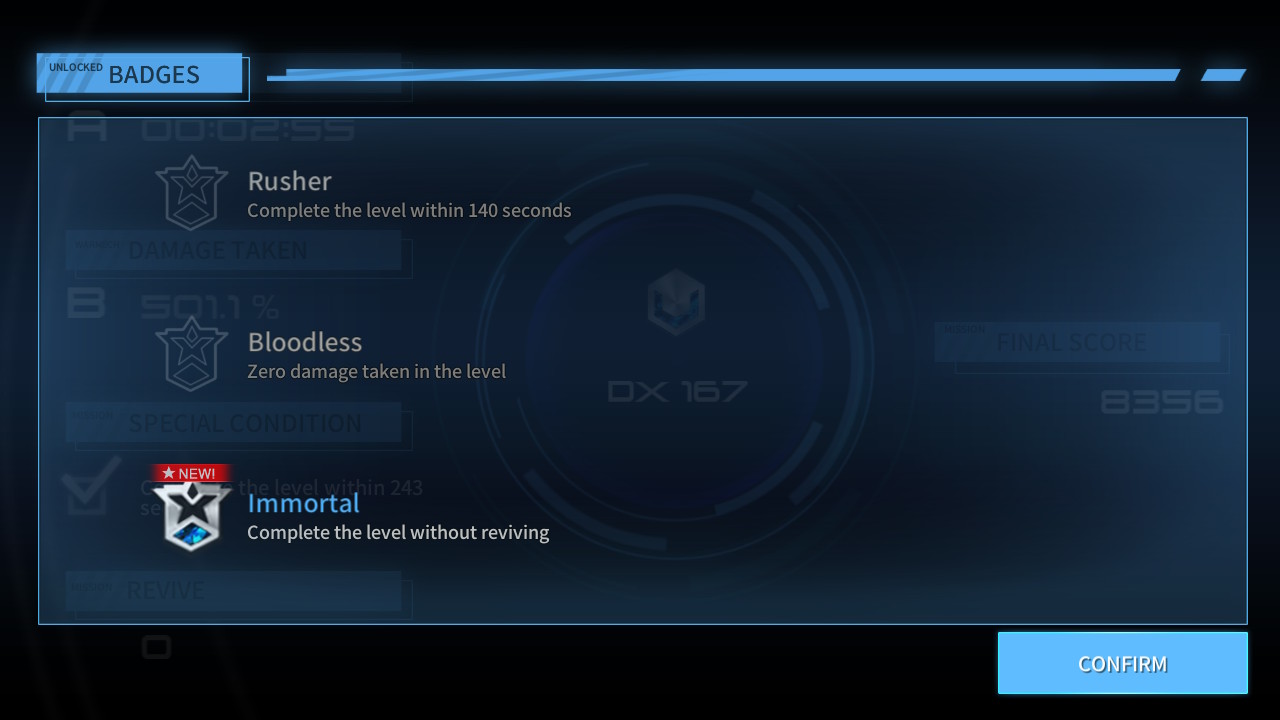 Aside from the main bits though, there’s also “Another Story” and “Special Mode” options to continue your unique gameplay. Another Story offers a secondary scenario with a unique character, while Special Mode is a mode designed to test your endurance with combat set to an ever counting timer (the longest time alive being the goal).

The only problem with all this extra content is that if you aren’t feeling the rest of the game you certainly won’t be feeling this bit either. It’s really just more of the same in a slightly different package, or with slightly different rules, so those (like me) who found the game to be a bit of a slog might not want to even try them.

In the end, Implosion is simply a competent – but not necessarily special – hack n’ slash action game. It doesn’t really offer anything to draw the player in, and its only truly enticing factor is how good it can look at times (both in-game and in cutscenes). The story is mediocre, the action is fairly standard, and the upgrade system is just a slight variation on so many others. The only reason I can think that anyone would buy Implosion is if they straight up need this type of action game on their Switch. That said, it’s one I probably wouldn’t have finished if it wasn’t for this review.

Implosion is a hack ‘n’ slash action game that looks – from a distance – much better than it actually is. Once you start playing however, you’ll find a fairly average (if not downright mediocre) title with some great looking graphics. There’s simply nothing unique or enticing about this one aside from its shiny appearance, so you’re probably best to look elsewhere if you’re looking for something that engages you in any meaningful way.