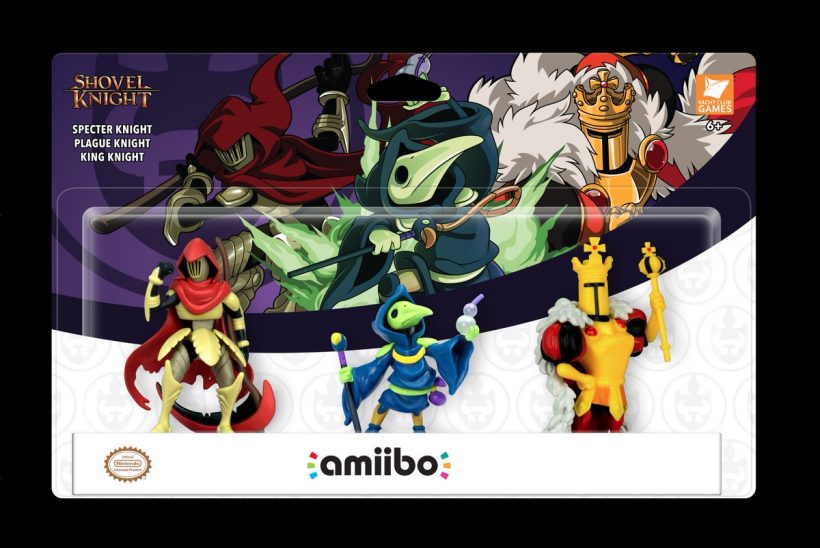 The Shovel Knight series of amiibo is to get three new additions.

Since December 11 2015, Shovel Knight carried a lonely, solitary figure in the range, alongside the likes of Chibi-Robo and BoxBoy.

But the shovel-wielding protagonist’s wait is nearly over.

King Knight, Plague Knight and Specter Knight are the three new characters to be immortalised in amiibo form and it appears that the trio will only be available as part of a beautiful-looking three-pack, pictured below.

For those new to the series, Specter Knight starred in the Shovel Knight: Specter of Torment campaign, Plague Knight in the Plague of Shadows expansion, and King Knight will lead the recently-announced King of Cards, the final chapter in the Treasure Trove saga.

Each new amiibo character will bring with it an exclusive armour set for the game, which of course will be nifty if only aesthetic.

Perhaps more excitingly, they also unlock new amiibo challenge stages, and also give the ability to summon fairy companions on any campaign.

These amiibo will work with the Switch, Wii U and 3DS versions of the game, and we’re hoping for a release date to be confirmed soon. As for price, we can expect something similar to the £29.99 that the Animal Crossing three-pack retailed at some time ago.

Check out the hilarious trailer to see the three new amiibo in all of their glory.

0 thoughts on “Three new Shovel Knight amiibo on the way”