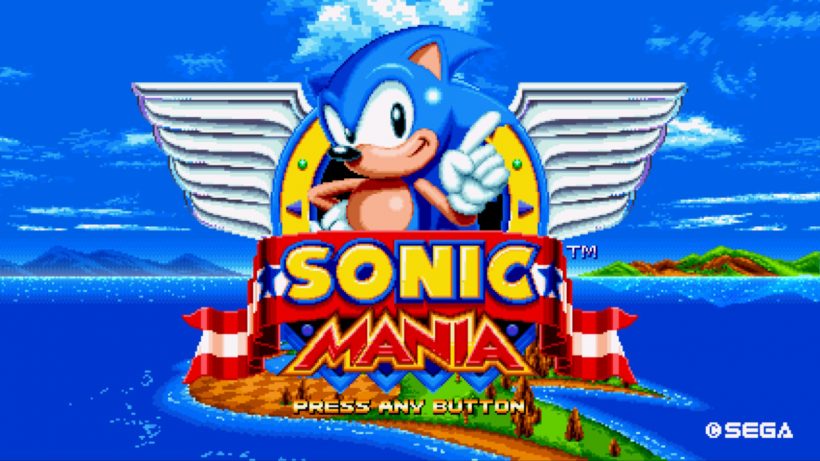 What does Sonic use to knock on a door? His Knuckles…

When I was a lad – which my kids tell me was a very long time ago – you were SEGA or Nintendo. Mario or Sonic. Mega Drive or SNES. I was a Nintendo child, but I was inherently aware of the speedy blue mascot on the other side. Thankfully for you folks reading this, this review isn’t compiled by the thoughts of someone that favoured the other side – this writer’s wife was on the other side of that fence as a child. And, for the most part, she loved Sonic Mania.

The years haven’t been so kind to Sonic. The loss of his parent company as a console business opened the door to multi-platform Sonic, but it’s fair to say that compared to Mario – where the core games have gone from strength-to-strength, Sonic titles arguably haven’t left their mark. Could that be about to change? Sonic Mania is the first of two new Sonic titles arriving this year, and has been developed by PadogaWest Games/Headcannon – led by Christian Whitehead, best known for his work on getting classic Sonic titles to phones and tablets and creating his own engine, Retro Engine for 2D based games, which is what Sonic Mania is built with. So, what is Sonic Mania? It’s a nostalgic journey into Sonic the Hedgehog history and comprises of twelve worlds, with a mixture of classic Sonic environments as well as some brand-new ones. You can play as the famous and eponymous hedgehog, as – or with – Tails or even with Knuckles the Echidna. Starting (as is typical) in the Green Hill Zone you have two acts to best in each world before facing off against Dr Eggman (Robotnik) in one of his boss-guises. Successfully negotiating these challenges will then propel you further into the world and into even more of a challenge.

Along the way, you’ll find everything that is typical with a Sonic game. Rings – collected to act as pseudo-health or increase your life, shields, invincibility and numerous enemies, jumps, springs, loops and so-on. As your character races across the landscape, your velocity will increase until you are speeding along at an incredible rate, shooting down tunnels and looping and sprinting all over the show, so long as you don’t hit an enemy or hazard. Everything feels so right, for the most part, and only increases in quality – and difficulty – as you progress. 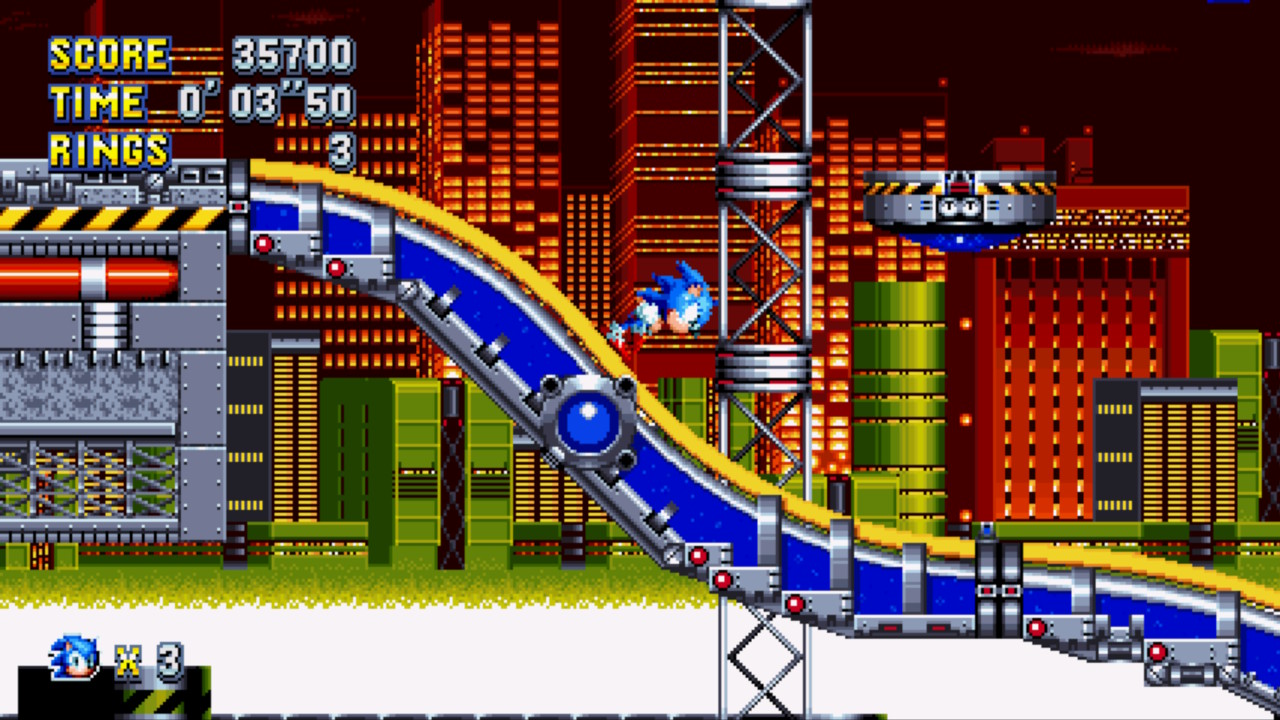 Make no mistake, this is an incredibly challenging little title, which my wife assures me was always the case. I was in awe as she demonstrated complete mastery – against what seemed impossible leaps of faith at times – of the mechanics in play before dispatching with the final boss.

With three different characters to choose from, you’ll also find different ways to play. Sonic can boost, Tails can fly and Knuckles can climb – the aim of the level doesn’t change at all but the varying skills might make it more interesting.

Visually this looks exactly what you’d expect a HD interpretation of a Sonic game to be. It features a few filters to sharpen the fidelity and even has a cathode-ray style filter for that classic 1990s effect. The tunes here are also faithful recreations of the original ditties, with a modern twist. The zones are predominantly side-scrolling, but there are two three-dimensional types of stages to play on, reminiscent of the classic stages from Sonic-CD. The first will see you chase after a space-ship which has a “chaos emerald” on it, and you’ll collect orbs to increase your speed and rings to increase your time until you either run out of time or catch it. You can access this stage through a giant 3D-styled ring. Also present is the pinball-like stage from Sonic the Hedgehog 3, which you can enter if you have 25 or more rings at a checkpoint. Depending on your performance in this bonus stage, you’ll be awarded medals to unlock secret and hidden features within the game. 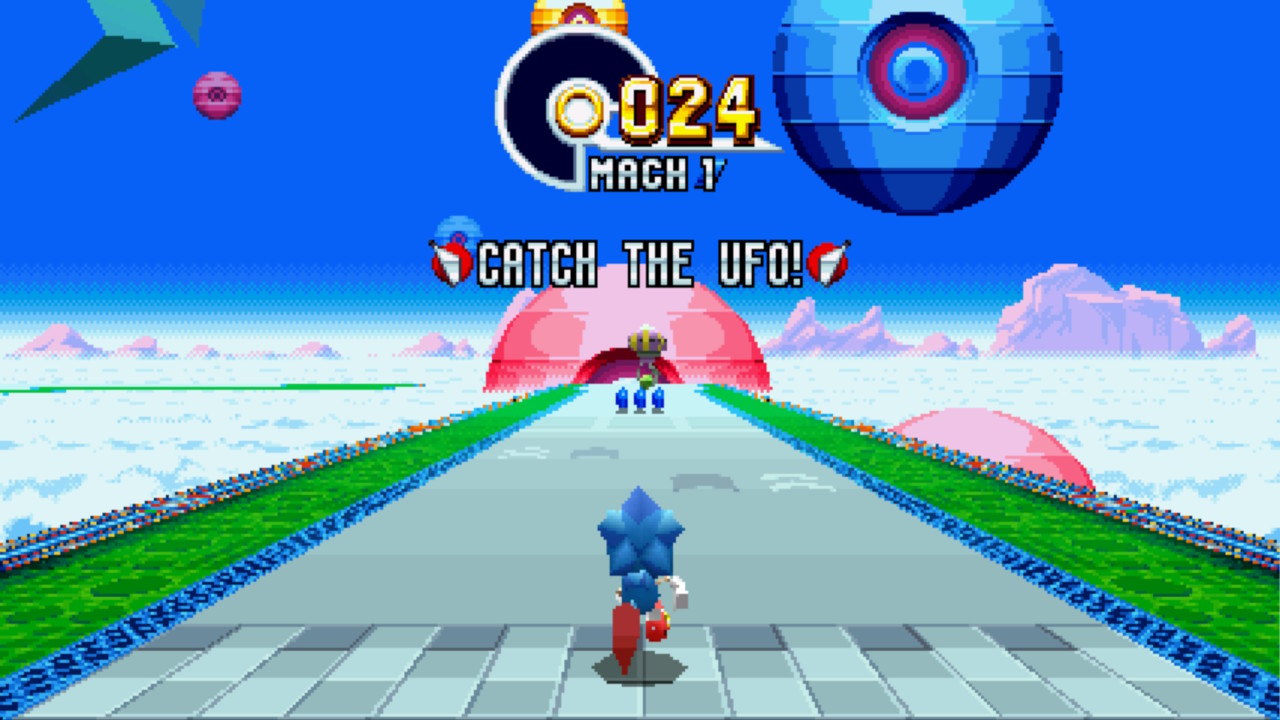 There’s plenty to see and do here – including a multiplayer mode for two players to attempt to best each others times – so you could be forgiven if you thought everything was rosy, but there are niggles. We noticed a few times that there were minor glitches – one particular section had to be restarted as we couldn’t get past it, no matter how fast we were moving. It was as if there was an invisible block affecting our progress. The difficulty is also a big barrier to being accessible to everyone. Sure, it’s great to have a challenge, but it has to be fun as well. For me, it wasn’t particularly easy to play. Luckily, the wife is a pro at these type of things, which I’m not ashamed to admit. However, she said that despite besting the game, it wasn’t particularly fun at times because of that difficulty, with it being too difficult in places.

That said, she said that overall she was impressed. It’s a great throwback to classic Sonic titles, and she couldn’t put it down from start to finish. If you find yourself filled with nostalgia and love for the little blue hedgehog, then you should give this a look.

Sonic Mania is like a greatest hits album that your favourite artist may release, with a few new tracks as a bonus. It has a high level of nostalgia, gloss and polish and will really challenge your skill, reflexes and patience. There’s quite a bit to get stuck into, but you may find yourself being frustrated. If you love the little blue chap and relish a challenge, speed along to the e-shop and pick this up.