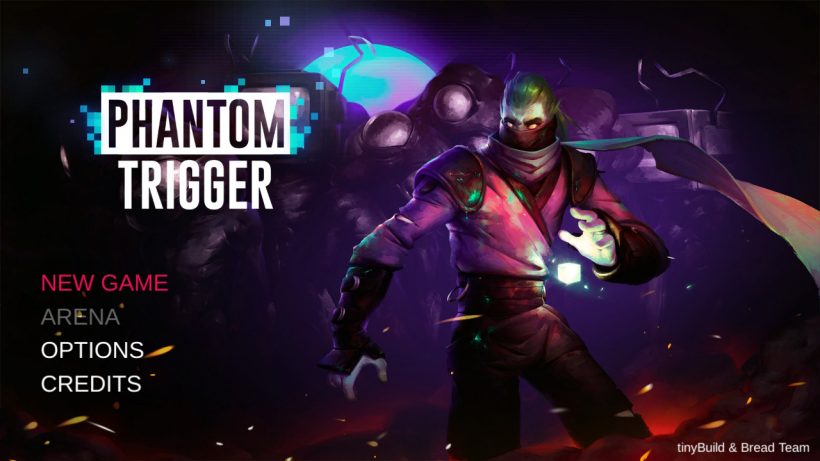 Hacking n’ slashing cyber-demons over and over again.

Potential. This is an important word when it comes to the many indie games that you can find on the Switch’s eShop. Some of them may not catch your attention at a first glance, but they have the hidden potential to captivate you – given the chance. Others seem just like the next game you are going to fall in love with, but are more about what they could’ve been than what they actually are. Phantom Trigger falls right on the middle ground between those two spectrums.

Creatively described as a ‘neon slasher’, Phantom Trigger is a game with a unique premise. Its narrative blends two distinct worlds; on one side, you have Stan, a middle-aged man who seems to live a pretty standard life in our world – until he collapses. On the other, a mysterious scarfed man arrives in a strange world, where other people call him Outsider. You then control the Outsider on many incursions through a portal – and aeon worlds – defeating all sort of creatures while you try to figure out what is happening to both characters. 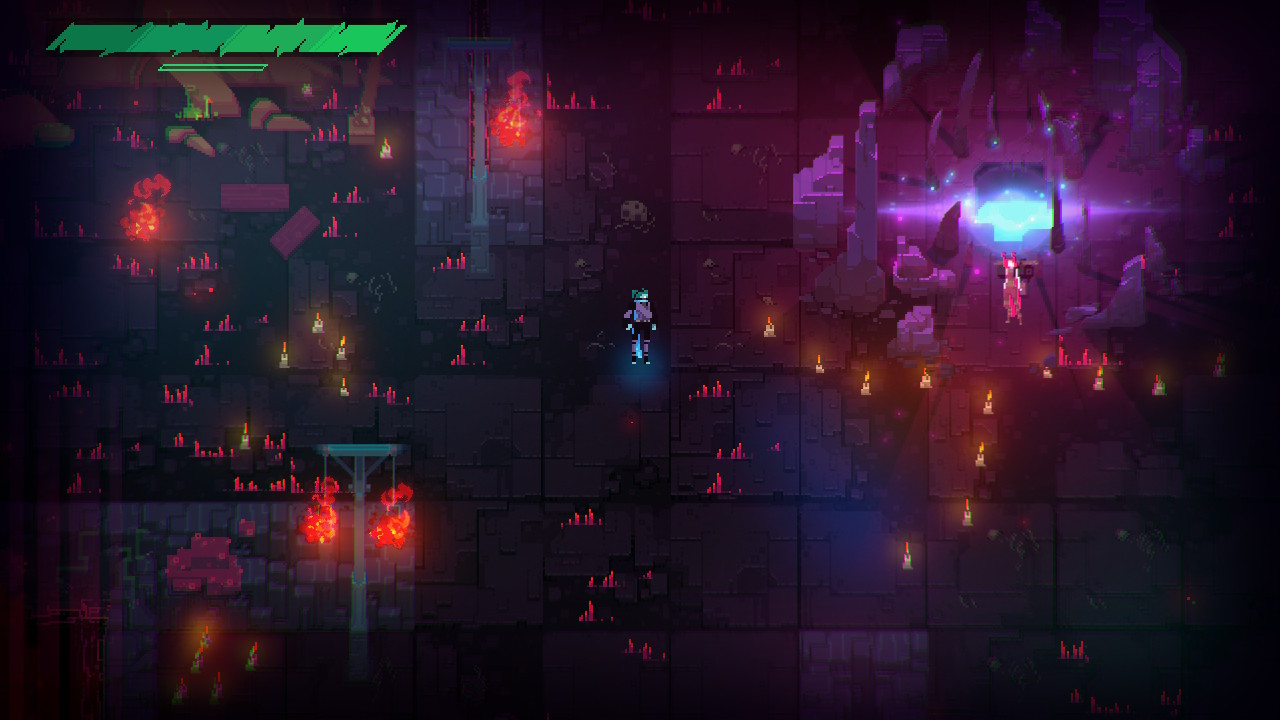 In order to do that, you have at your disposal a variety of elemental weapons that you can materialize and combine under a combo-based system. The most basic one is your sword, which can be summoned by pressing Y and works as your fast standard weapon. To keep up the fast-paced combat, you can also press X to pull enemies towards you with a whip, and the A button is added to the mix at a later point with a second but slower damage option. Combat is not all about attack, though, as you can also press B to activate a blink skill, teleporting between the enemies and hazards and using it to avoid damage.

The combo system is a very simple one and works with different combinations of three attacks. Repeatedly pressing the same button will give you the full combo of that specific weapon but, as you progress, you unlock different combinations between your weapons that may trigger unique attack patterns – sometimes even adding a special effect to your combo such as freezing or burning. It is here that the RPG system of Phantom Trigger comes into play. Each of your weapons will accumulate experience individually. So, the more you use each of them, the stronger they’ll be. It is a very interesting system, as it encourages you to try them all and mix them on your progress. 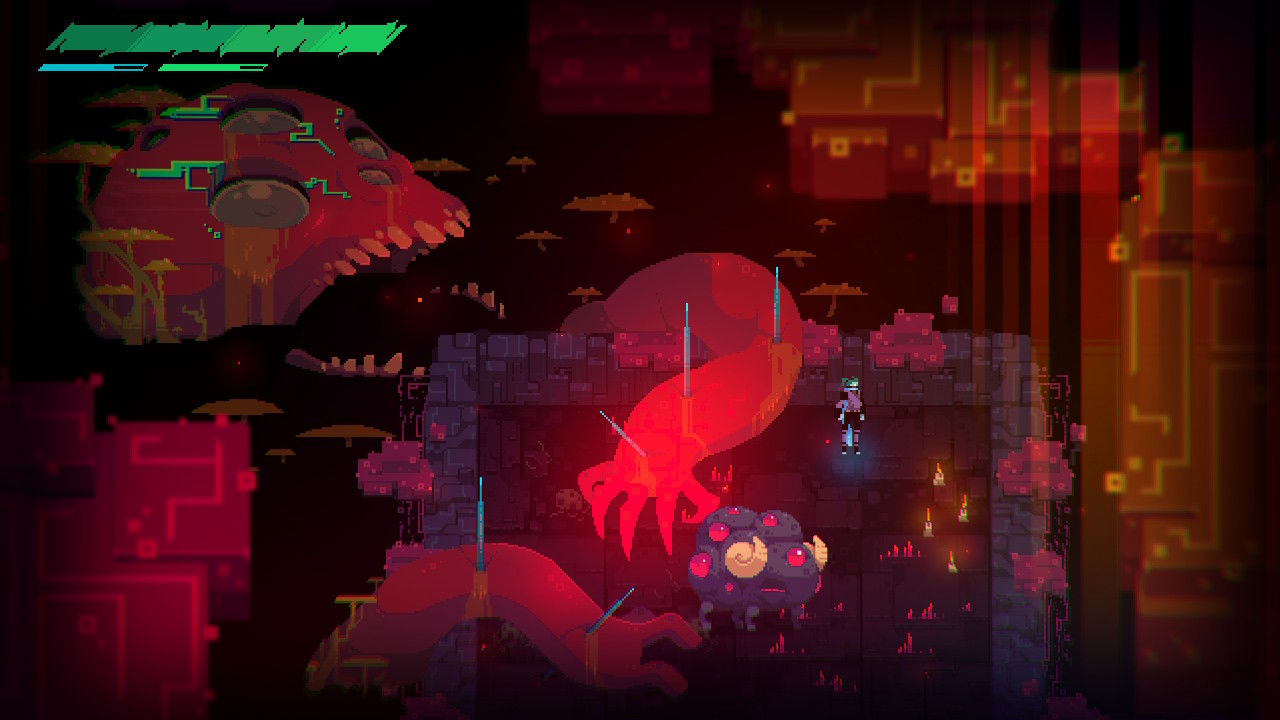 What is not interesting, though, is how repetitive the use of this system is – and, consequently, how repetitive Phantom Trigger is in general. Combat is fast-paced and easy-to-go, but it falls into the rather simple realm due to the low number of varying enemies that the game has. The game is challenging and you may die easily if you don’t pay attention, but after you learn the pattern of the enemies, combat becomes boring, and the difficulty comes from the quantity of enemies you encounter, not their variety. Then, it just becomes frustrating when you get to see the third or fourth variation of the same basic enemy, except using fire instead of ice.

Phantom Trigger does compensate these problems a little due to its beautiful art style and fearful soundtrack. While some of the maps do look too similar, they are a mixture of the cybernetic world and demon dimension that just keeps you wondering what exactly it is all about. While combat may fall short due to its repetitiveness, you may keep wanting to get to the end to see what it all means. The game even has four different ending paths – and a co-op mode, for those interested – so, in the end, it may be worth a try if nothing better is in your backlog or wish-list.

Phantom Trigger is on the halfway between a true indie gem and a completely skippable title. It does have an entertaining hack n’ slash combat, but it falls short due to its repetitiveness. Its art style and atmospheric cyber-demon world is interesting enough, though, and may keep you hooked in addition to its surprisingly thought-provoking narrative.