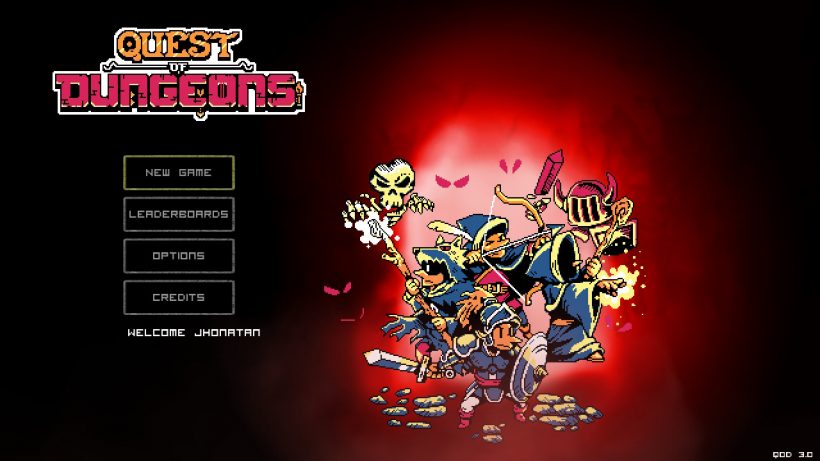 It’s dangerous to go alone but you did that anyway.

I’m constantly impressed by how many shiny indie gems we can find that are so often neglected by the mainstream public. While there are some bigger games that try to captivate the player by adding huge amounts of content, there is something truly valuable in games that aim for a simple and straightforward idea and execute it well. Quest of Dungeons is one of these titles.

Funny thing is, at a first glance, Quest of Dungeons may not seem like a simple game at all. It is a turn-based dungeon crawler game with RPG and roguelike elements and it mixes all those elements in a cohesive and easy to play way. It is a game that you can play for hours or in short bursts and have equal enjoyment.

The premise of Quest of Dungeons is that an evil lord has stolen the light from the world and put it in a lamp. Four heroes are then tasked with entering his lair and have to recover the precious artifact. At the beginning of each run, the player can choose between a warrior, a wizard, an assassin or a shaman, and each of them will have a different set of skills and unique mindset for you to engage with the enemies and perils of the dungeons. 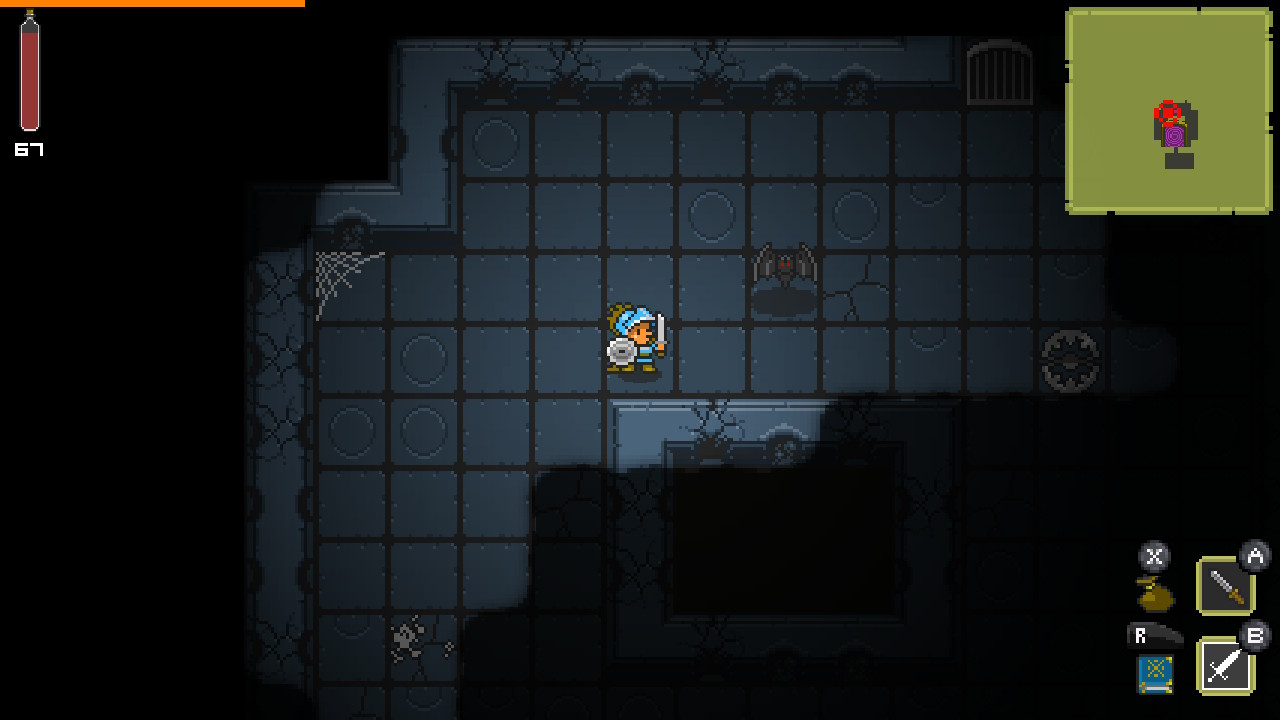 Following the most basic elements from the roguelike genre, you will explore a new random generated dungeon every time you start a new game. Everything from the positioning of enemies to the map layout will be different – including item drops. This adds a very compelling risk and reward feel to your dungeon crawling, because, as a roguelike, dying means that all your progress will be lost. This may sound too harsh for some players, but Quest of Dungeons is designed with this in mind. A complete successful run doesn’t last more than one hour. Still, the game is very challenging, so most runs may not even get to the 20-minute mark.

Grids divide the entire Quest of Dungeons map, which is used as a measurement for the turn-based mechanic for both combat and exploration. The game counts as a turn every single action performed, be it walking, using an item or attacking. Your enemies are also restricted by this rule, so the game has a strategy take on how you want to treat your odds. Walking recklessly into a new room may work when you’re over leveled, but may be your doom if you find a more powerful enemy, such as one of the many soul-crushing bosses. 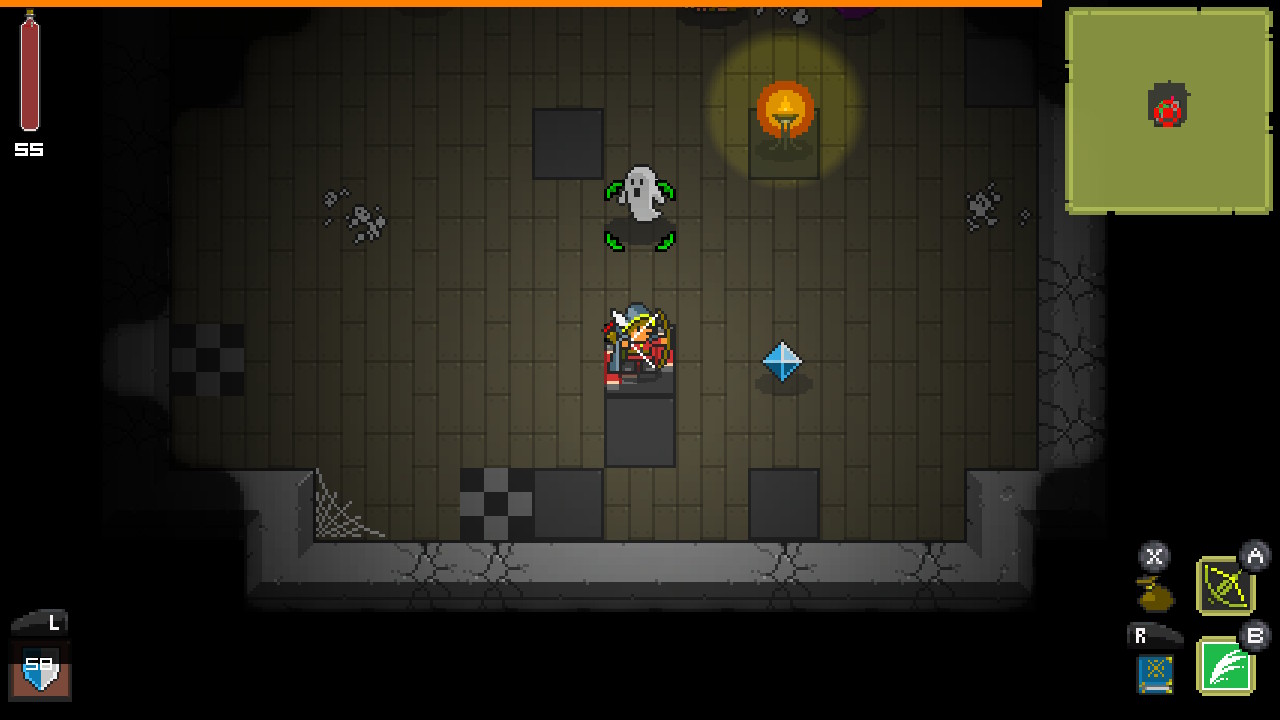 Quest of Dungeons‘ combat is more about how to approach your enemies than actually delivering blows on them. Every character has a melee range attack, that can be used either by pressing A near an enemy or by just ‘walking’ in its direction. Some classes, though, may have others tools that can be used by pressing B, such as magic powers and ranged attacks, so you may choose wisely which enemies you’ll fight, how you’ll kill them, and in which order. Enemies can crowd you faster, and that is never a good thing to happen, as it usually means you’ll lose all the precious experience points you got until then.

The RPG elements of Quest of Dungeons are not present in its leveling systems only, but you also have an inventory, in which you may stock potions, treasures to sell, and new more powerful equipment to use. At any time, you can press X to open it, and knowing the right moment to do so and drink one of your precious HP potions is often the difference between life and death.

Quest of Dungeons is also simple but effective when it comes to its graphic and sound elements. The entire game is presented with a charming 16-bit pixel art style. Each class has a unique-looking visual, and the enemy design varies from rats and bats to vampires, skeletons and other fantastical medieval creatures. They all lurk on the different floors in the dungeons and are matched with the appropriated background music. While not striking in any manner, the game’s soundtracks helps to create the exploration atmosphere needed for a dungeon crawling game.

As the Switch’s library grows every week, Quest of Dungeons may go unnoticed by many people, labeled as ‘just another little indie game’. Still, I had such a great time playing it, that I just can’t recommend it enough. It is an easy-going experience that I’m happy to keep on my Switch library for every spare minute that I may have. It is an adventure that I really do not mind going alone on.

Quest of Dungeons is one of the most enjoyable roguelikes to hit the Switch. It is an easy to play dungeon crawler with an addictive turn-based gameplay that makes you want to go for one more run.