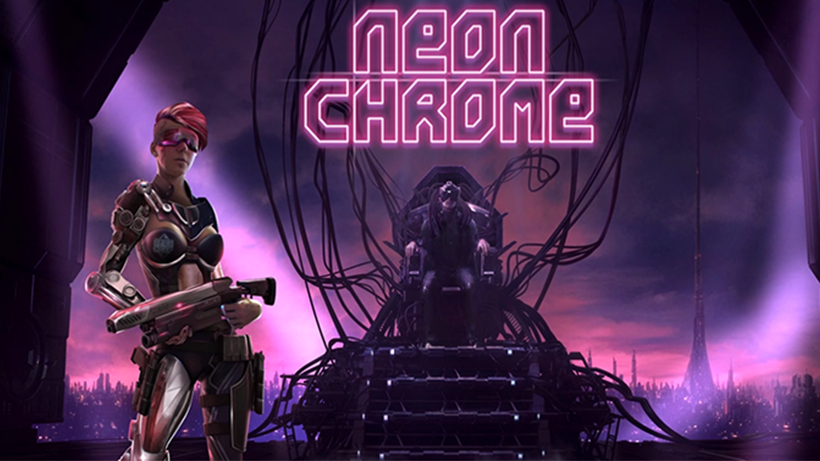 Neon Chrome is a rogue-like twin stick shooter set in a dystopian future. The game first came out last year and if you’ve experienced it before then dont expect much new stuff to draw you back in. 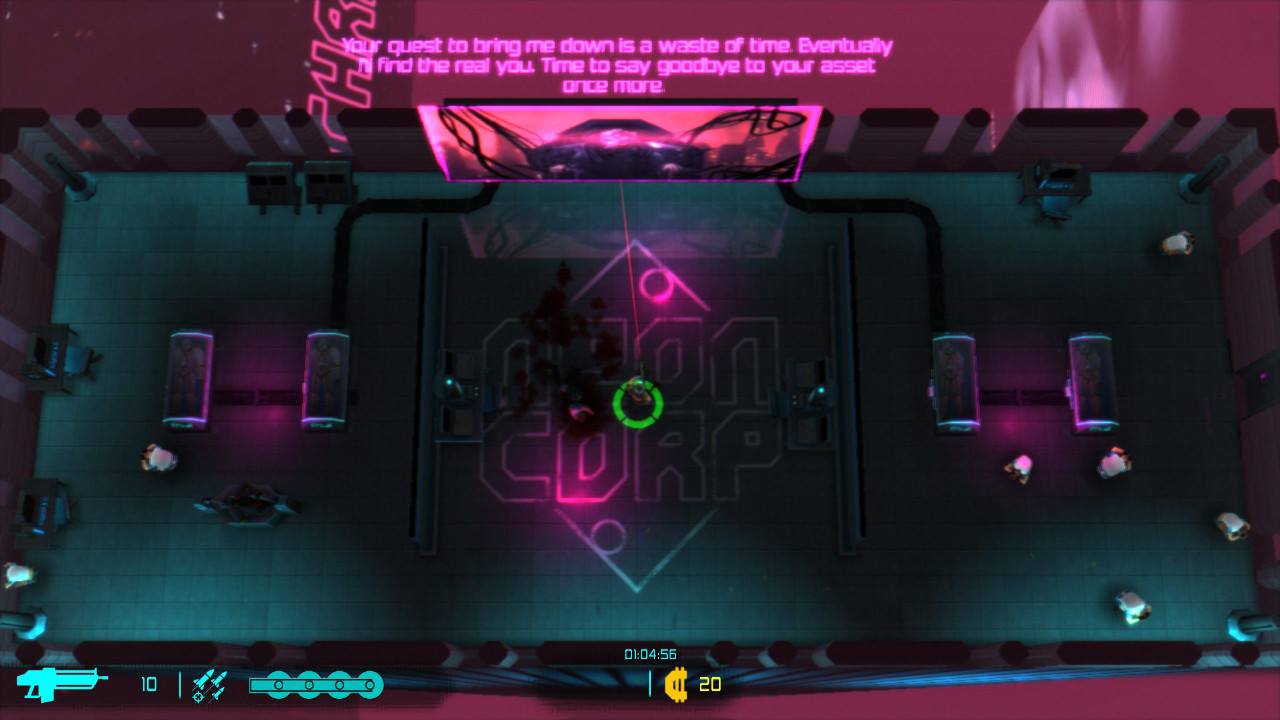 At face value there’s an interesting tale of trying to overthrow a despot overseer using an army of soldiers, it’s an interesting if not unique world but the game does not lean too heavily on its story – so if that’s what you’re here for then you best look elsewhere. Neon Chrome is all about the gameplay and, thankfully, that is still as good as it ever was. Your objective is to climb the floors, killing enemies and bosses along the way, the catch being that each level is randomised and you’ll need to upgrade your character between deaths. So far it’s classic rogue-like.

What Neon Chrome does so well is allowing you to play however you want, the game affords you the tools to play whatever suits your style. Fancy taking things more slowly and methodically working your way through a floor? Feel free, the enemies rarely swarm you and you can usually sneak your way around most floors and picking your fights carefully. If you’re more of a Rambo and prefer to kill first and ask questions later then that’s perfectly viable. You can customise your perks and character class and even weapons to suit however you want to play, this is where the game shines compared to others in the same genre, most other games hone in on one style of play whereas Neon Chrome somehow manages flexibility that others struggle with. 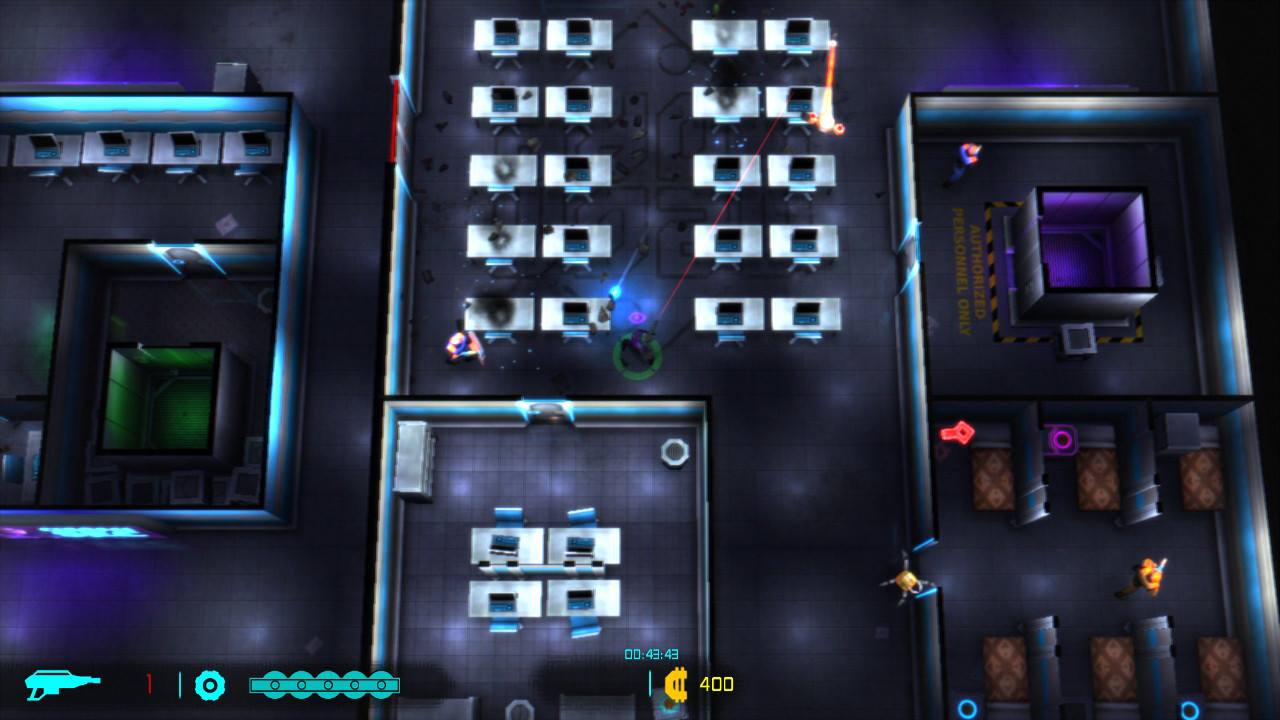 So how does the moment to moment gameplay actually shakedown? The core loop of shoot, die, upgrade, repeat is still a satisfying loop. The upgrades available to players are your standard health, damage etc and the upgrades will keep coming at a steady rate so you’re unlikely to stall and feel like you’re slogging through a section. The shooting makes up the bulk of your gameplay experience though and, thankfully, it holds up well. There are several weapons to use and on top of that there are weapon types with certain ammo types doing more damage to specific enemies though, in general, you can get by just shooting everyone with whatever is to hand. The bosses offer up a slight change in pace, requiring you to spend as much time dodging your enemies attacks as you start dishing out damage yourself. The bosses are varied and are a definite break from the enemies you’ll encounter during the rest of the game from a giant mecha-spider with machine guns to an airship that conventional weapons won’t even scratch. 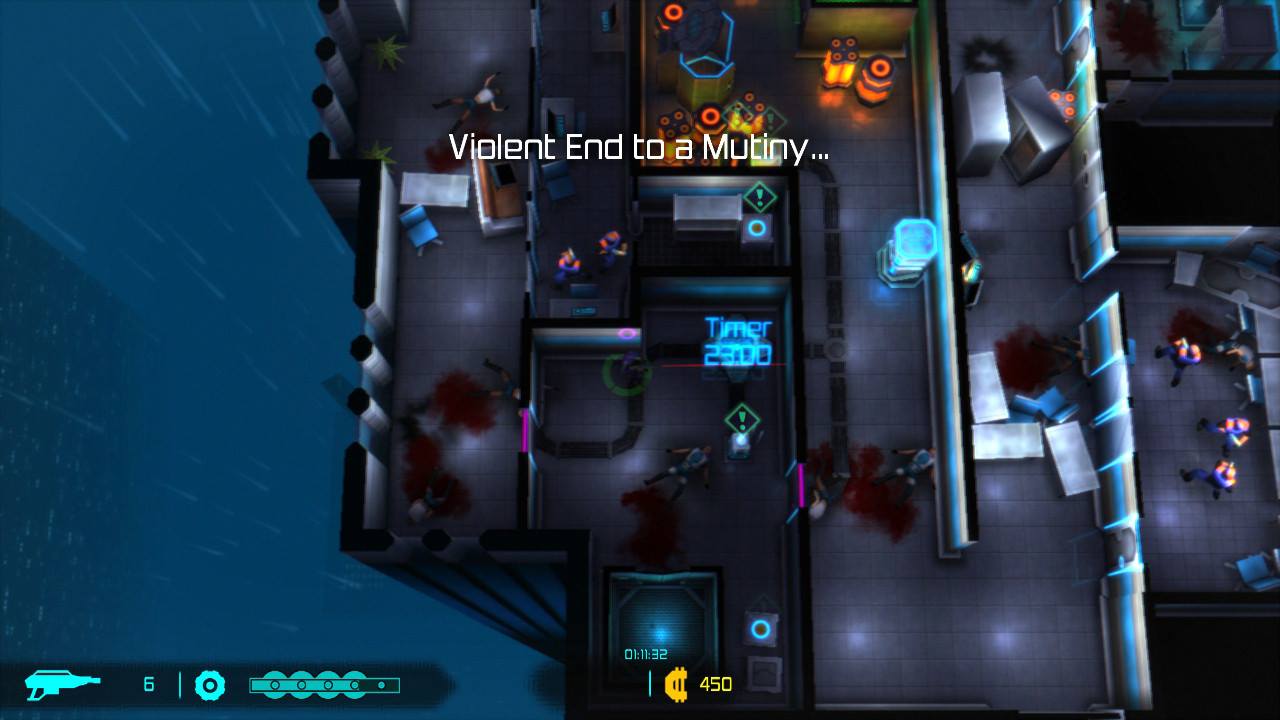 Visually the game strives for the neon (duh) cyberpunk look and those colours certainly pop on the Switch. The game offers up a small variety of enemies though you’ll soon find those repeating as the game goes on. The game makes the most of the screen space as well opting to display all the key information around your character such as health and shield levels, reserving the screen edges for ammo counts and special powers. It’s a smart choice that really helps when in portable mode and screen space is limited.

Neon Chrome has been around for a while and now it’s here on the Nintendo Switch. Those that have played the game before know what they’re getting into and probably won’t find a significant reason to reinvest but for newcomers I highly recommend checking out this twin-stick shooter as it offers up highly re-playable gameplay in a way to suit any player.

Neon Chrome was a good twin-stick shooter when it first came out last year and thankfully it holds up well on Switch. Thanks to flexible straightforward gameplay and the randomised replayable nature of the game it’s definitely worth a look for any fans of shooters looking for a smaller title to kill some time.