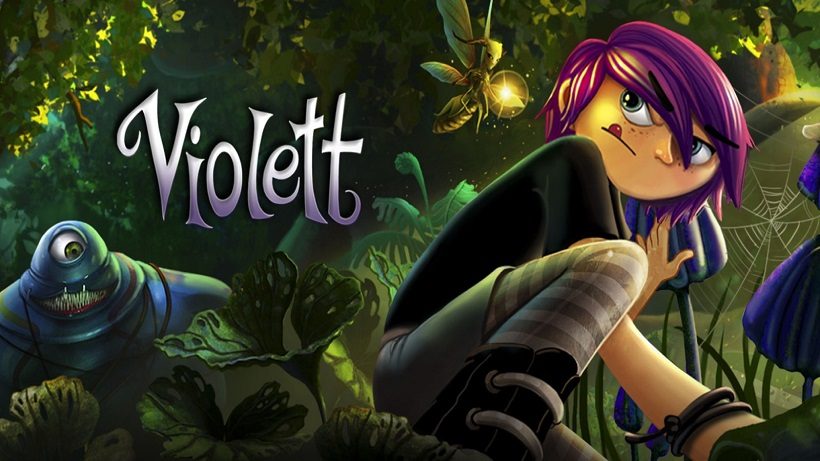 Point and click games are very few and far between these days, so when one does release I am instantly drawn to them due to spending a lot of time during my childhood playing titles such as Broken Sword.

The game starts with the titular Violett being uprooted by her parents, who have decided to move to a nice house in the country. When her parents start to argue, Violett retreats to her room – where she notices something glowing in a hole in her wall. Curiosity gets the best of the young girl, and Violett reaches into the void and retrieves a glowing amulet – which causes her to fall and seemingly shrink down to fit into a strange, other-worldly dimension.

It is here where you take control and the point and click adventure begins. You soon realise that you need to find the scattered fragments of this amulet if you wish to make it back to the real world and be reunited with your parents! 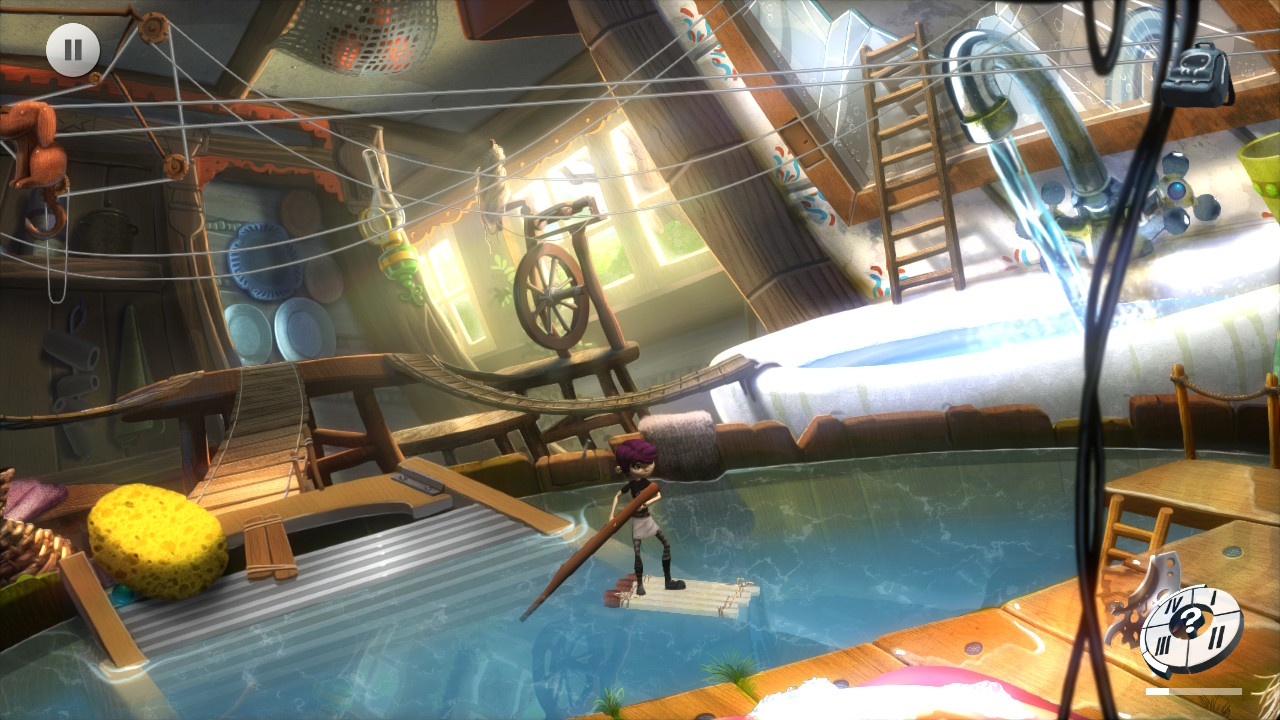 The game plays out with you needing to solve various puzzles to find the missing pieces of the amulet, and you do this by travelling to different, themed rooms that are all accessible at any time via an Escher-esque staircase. Whereas some point and click titles of yesteryear would involve a lot of backtracking between areas to use newfound items to solve puzzles that couldn’t be previously, Violett keeps things simple by keeping solutions enclosed in each puzzle room. Combined with a hint system that will drip feed you up to four solutions per room if required, Violett should be rather accessible to most people that pick up the game. However, the lack of text in the game – interactions are done via the use of pictures within speech bubbles – means that sometimes what needs to be done next in the sequence of events isn’t always clear. This made me lose a bit of interest at times with the game, and this lack of dialogue between characters meant that the game’s overarching story was a little hard to follow – making it feel like a bit of an afterthought to me. 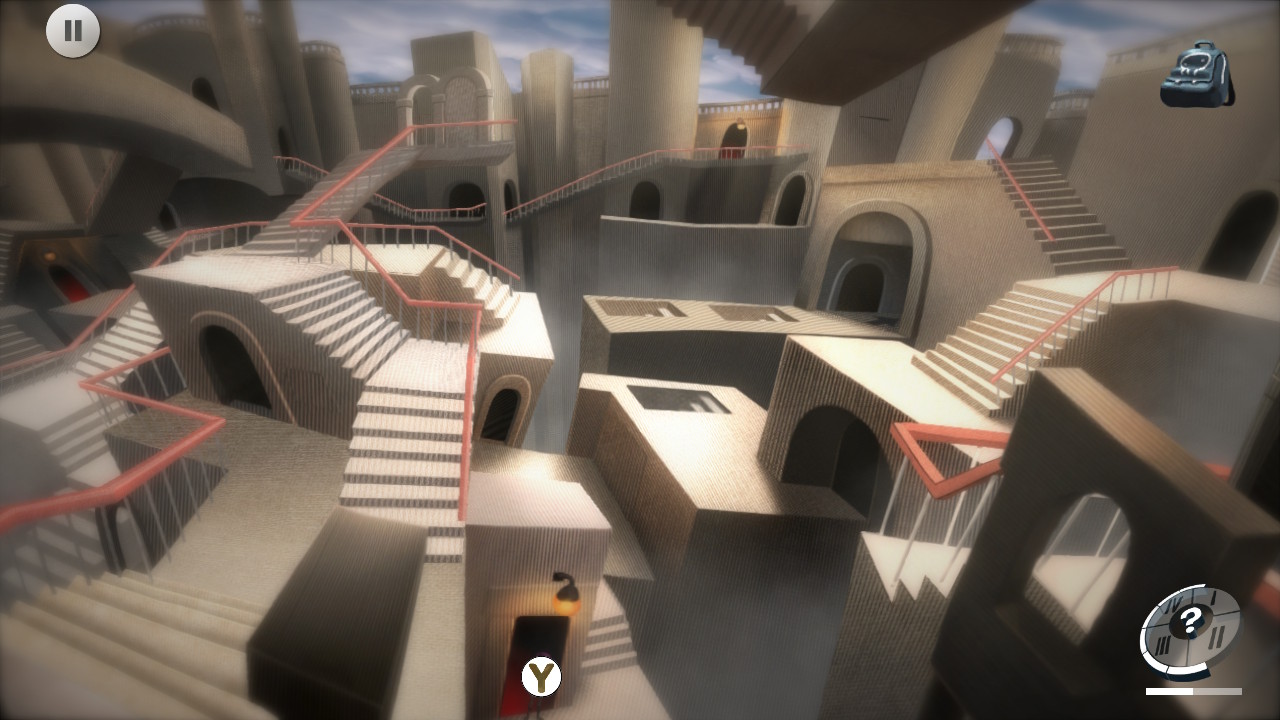 Starting the game up, you are told that the optimal method of control for this game is by using the Nintendo Switch’s touchscreen. You can play Violett in any of the Switch’s modes, but using the Joy-Con or Pro Controller to navigate around the game’s weird world do not feel as intuitive as using your fingers to actually point and click on the scenes that you are presented with. I started playing the game with my Switch in docked mode, but soon transitioned to handheld mode and never went back due to the clunkiness of the controls when using anything other than your own digits.

Seemingly influenced by Alice in Wonderland and Coraline, Violett looks great on the Nintendo Switch. This is the remastered version of the game, and the distorted, fantastical environments look good – especially when using the Switch in handheld mode to utilise the game’s touchscreen controls. There is one jarring issue with the audio, when the game autosaves (which happens every few minutes) the audio stops for a few seconds. These few seconds of silence really do detract from the experience and hopefully will be fixed in an upcoming patch.

If you are fan of the point and click genre, Violett is worth a look – but be prepared for some frustrations. The game looks nice and some of the puzzles will have you scratching your head, but you may find the controls and non-descript story a bit of a letdown. If you are new to the genre, I would recommend that you give this one a miss, as although Violett does get somethings right, I would recommend you look at other titles such as Thimbleweed Park for your first point and click experience.

Violett is a pretty looking point and click title that does have its moments but is let down by poor storytelling and some strange design choices. Fans of the genre and newcomers alike will find the game to have a certain charm, but frustrations will creep in and I found myself appreciating the stalwarts of the genre even more by the time I saw the end credits.