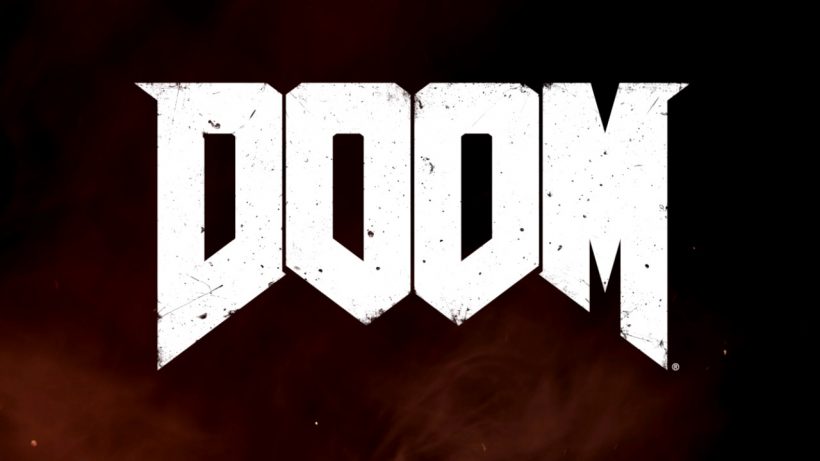 Despite the short time between its announcement and release, there’s been plenty of time to speculate on the Switch version of Doom. Would it be the same fast-paced FPS released last year? Would it have the same mature and blood-soaked content? Hell, would the Switch be capable of running it smoothly at all? Despite some minor technical concessions, Doom on Switch is still the same violent, frantic shooter that will make the blood pump inside your veins… and now it’s portable. Panic averted, thanks to Panic Button!

If you are unfamiliar with id Software’s 2016 resurrection of its famous title, you are in for a treat. It shares the name with the genre-defining 1993 title for good reason, as instead of being a straight-up sequel to the survival/horror styled Doom 3 this “new Doom” takes the most memorable elements from the classic shooter series and reinvents them with more a more modern twist. While traversing the high-tech, demon-infested installations of a Martian base, you’ll be shooting, gunning and chain-sawing any infernal creature that may cross your way. And this time, you’ll have at your disposal a series of gameplay systems that encourage a fast, brutal and aggressive approach to combat. 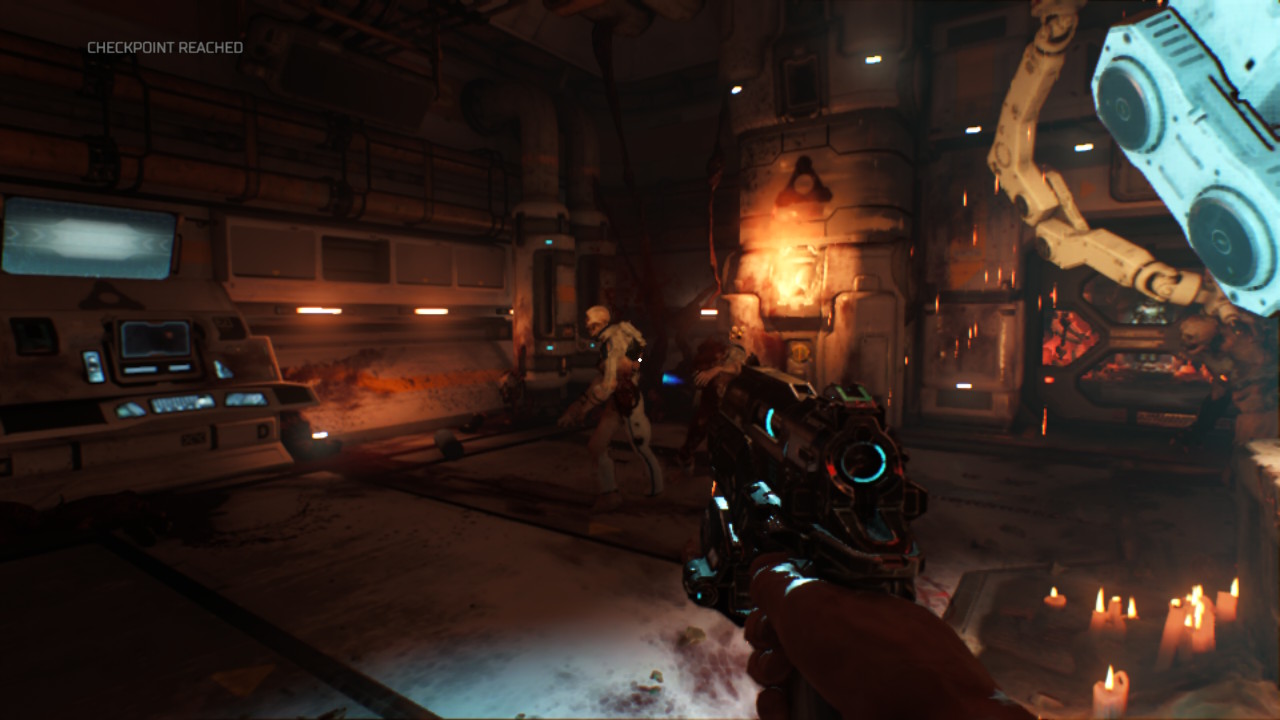 This is evident from the very beginning of the approximately twelve-hour campaign. As the Doomguy, you’ll awaken on Mars and immediately dispatch some demons before interrupting a transmission that was explaining what has happened. The game does actually have a solid narrative, but initially it plays as a little joke; an invitation to throw you into the thick of things and embracing the fun which is tearing the demonic horde to pieces.

It’s incredibly enjoyable because of how well built Doom’s gunplay is. The act of shooting in Doom is pleasurable enough by itself, as each of the weaponry in your ever-growing arsenal has its own effect on combat and feel unique to each other. You can almost feel the weight and knockback of when you fire a shotgun, for instance, and your enemies feel them in a much more intimate way, I’d say. This adds an almost tactile feeling to combat, which is strongly accentuated by Doom’s glory kill system.

Inflicting enough damage to your opponents will make them staggered and will highlight them for a brief moment, which is the visual cue that you can perform a brutal finishing move. Instead of being just a violent and satisfying reward for executing an enemy – like in a Mortal Kombat’s fatality or one of God of War’s finishers – these come into play as one of the key elements of Doom’s combat. Unlike other modern first-person shooters, you do not regenerate health automatically. Health packs can be found scattered around your environment – albeit not particularly plentiful – but they also appear as a reward for performing glory kills. Thanks to this system, the game constantly encourages you to move forward and dispose of enemies with glory kills in order to keep yourself alive. This aggressive approach is enhanced by Doom’s astonishing heavy-metal soundtrack, which blends perfectly with the non-stop action. 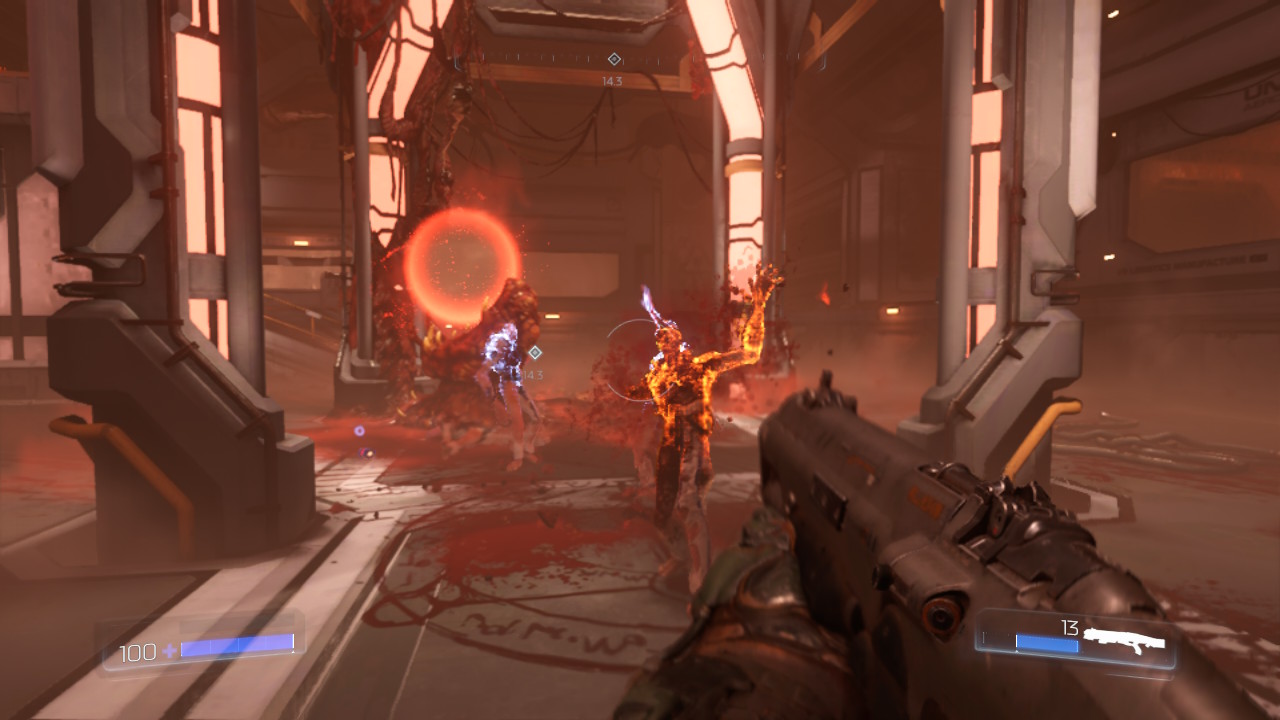 While this frenetic action creates an enjoyable, fast-paced experience (somewhat resembling a brutal, non-stop infernal dance), Doom also does a good job in creating moments for you to breathe. The main campaign is full of expansive, open levels, and each one of them has plenty of room for exploration – with many hidden passages and secret collectables to be found. There is a level of customization to your equipment which not only applies to your suit, but also each one of your weapons too. All can be upgraded in unique ways with some upgrades adding a second ability to your weapons – which not only makes you more powerful and prepared for the demon hordes, but also adds depth to the combat, allowing for different strategies and innovative ways to engage your enemies. While not fundamental to your progress, these little extras are handy when facing the new and more powerful demons that appear as you progress through the campaign.

With both its thrilling combat and rewarding exploration intact, we have pretty much the same Doom experience built for Switch, at least content-wise. When it comes to visuals, Doom has a detailed photo-realistic artstyle. Although some sacrifices clearly were made in order to fit Doom on a portable device (on Switch it runs at 30fps, while it is 60fps on other platforms), the game runs smoothly for the most part – having a solid performance overall. It seems to be a little blurry here and there, and the framerate may drop a bit during the most heated moments. Still, the level of detail is impressive, and the game stands up quite nicely to the other platforms counterparts. While Mars’ installations may not be the most beautiful nor varied of places, there are some visual surprises, with breathtaking scenarios here and there.

If the campaign is not enough for you, Doom also comes with a fully-fledged multiplayer mode. In this mode you can join friends and take on the different game modes that can be found on many multiplayer shooters, like Team Play, Free-For-All, Deathmatch, among others. It does has its own separate leveling system, and your performance on each match is rewarded with points that can be converted into new outfits, weapons, and even playable demons. Yes, playable demons! While in its basic form multiplayer more resembles some of id’s classics – like Quake or Unreal Tournament – Doom does has some twists, like the aforementioned ability to transform and play as one of the campaigns more powerful foes. While not as attractive an option as its single-player counterpart, it is a solid mode in which you may sunk dozens of hours.

When it’s all added up, Panic Button has managed to deliver the complete Doom experience on Switch. It has come at a cost of a lower frame rate and visual quality – not to mention a few minor issues (audio glitches) here and there, but it’s decent. The multiplayer will keep you occupied and the arcade mode can be replayed to achieve better combos and higher scores and the game looks and plays exactly how you’d expect Doom on the go to play. It’s almost unbelievable that it’s available and plays so well. 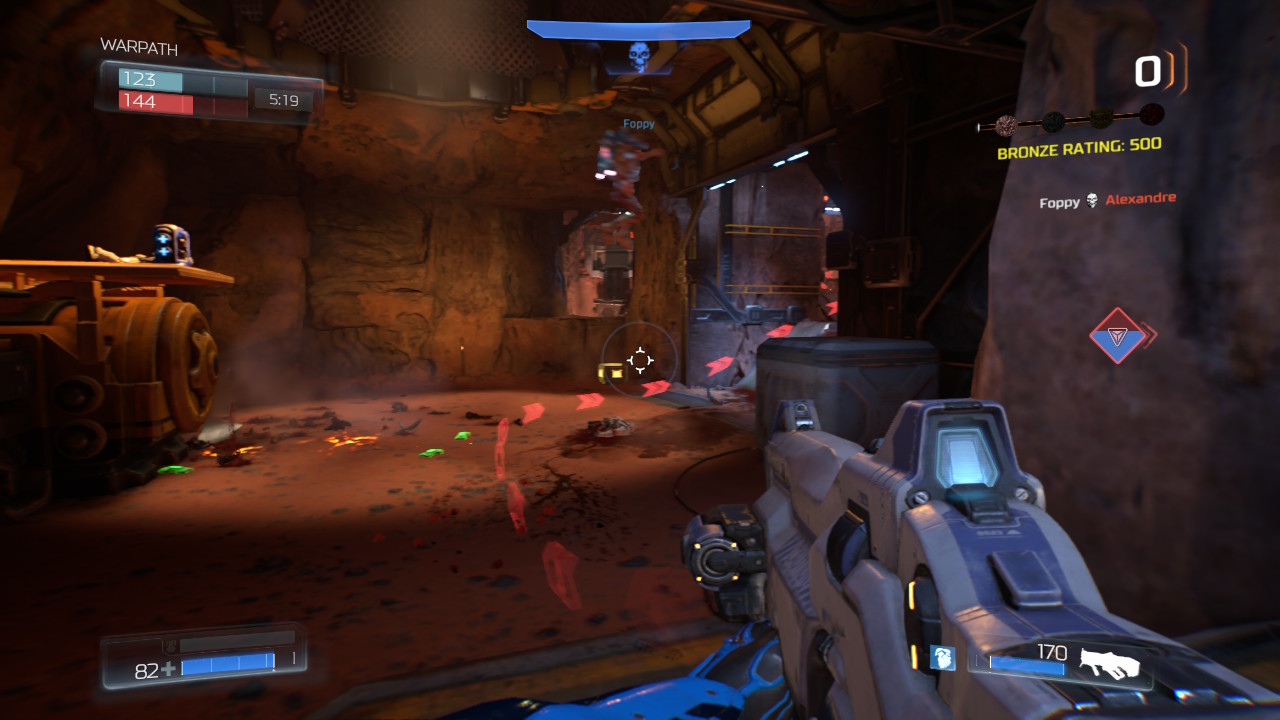 Doom is a fast-paced, blood-soaked first-person shooter which pitches you in an exhilarating war against the hordes from hell. While some concessions have been made in order to make it run on the Switch, it is still pretty much the same Doom game. With almost exactly the same content as the console version, it’s made all the better for its portability.

One thought on “Doom Review”