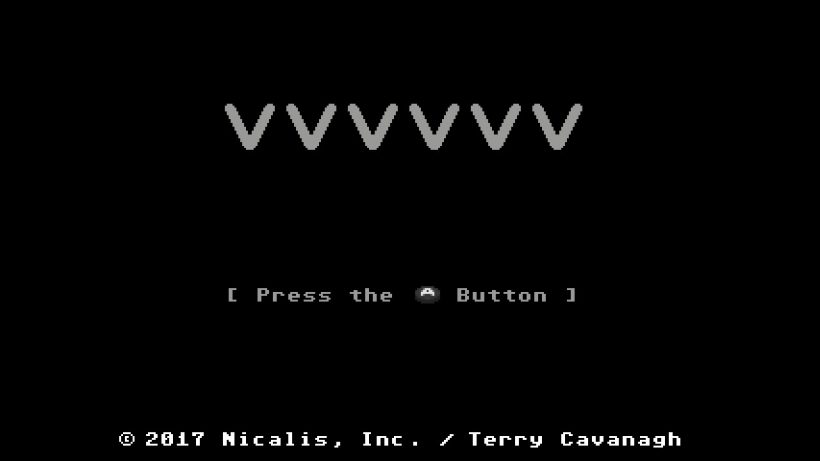 The Switch is slowly becoming home to some of the best indie platform games. We’re not only receiving amazing new releases, like SteamWorld Dig2, but also ports of classics of the genre, such as Cave Story+ and the upcoming Super Meat Boy. During the first year of the Switch’s life, Nicalis has become one of the most productive studios in bringing these games to the console, and they are now bringing another – the seminal platform game VVVVVV.

Previously released in 2010, the hard-to-pronounce VVVVVV has gathered some attention due to use of a mechanic that is simple, but changes considerably the way you think about platforming. The game is very purist when it comes to gameplay. You don’t have power-ups, nor any type of level up system. The platform challenges are the only focus of the game. The difference here is that instead of jumping, what you do is invert the gravity. After a brief introduction, you learn that some kind of inter-dimensional interference occurred, and the entire crew of your space station were subject to teleportation and randomly scattered all over the place. As the captain, you must then explore an entirely connected map, trying to find each one of your friends and bring them to safety. The game provides you with what, at first, seems to be a standard 2D side-scrolling platformer to carry out this task. You can use either your left stick or the directional buttons to move your character around. What would be your jump button, however, will entirely invert the gravity of your character – moving you towards the ceiling and allowing you to walk with the upside down.

Basically, this the only mechanic to be found in VVVVVV – which doesn’t mean that the game is repetitive or uninteresting. On the contrary, it takes up its very basic premise and progressively presents new ways to twist it, adding variety and rising up the challenge. On this matter, this is a very hardcore platformer that won’t hesitate to kill you on each one of your split-second slips. You’ll find spikes (whose format are Vs, who would guess?) and other hazards scattered all over the map, and must use your gravity shifting power to traverse through them without dying. VVVVVV isn’t punishing, though. You have plenty of checkpoints between the hardest rooms, and the game follows the same insta-restart philosophy of games like Super Meat Boy and Hotline Miami. This way, you’ll restart instantly from the last checkpoint upon dying.

It is possible to argue that the VVVVVVisuals (sorry!) are very simplistic, but it follows an 8-bit pixel art style that is pleasant on its own, and doesn’t detach you from the actual fun of play. Better still is its electronic chip tune soundtrack, that bumps you forward even after died for the fiftieth time. With this, the platforming experience of VVVVVV is a very solid one, and if I have to pinpoint any flaw, it would be the game’s duration. You can finish the main campaign in less than two hours, and while there are unlockable challenges and collectables to find, VVVVVV leaves you wanting more. At least, for the first time, the Switch version of VVVVVV has a co-op mode, in which you can replay the entire main campaign with a friend and hang out – from the ceiling – together.

The classic indie platformer VVVVVV plays around with what seems to be a simple gravity-inverting mechanic. By evolving on the concept, it creates a platforming experience that, while short, may prove challenging for even the hardened platformer aficionados out there!