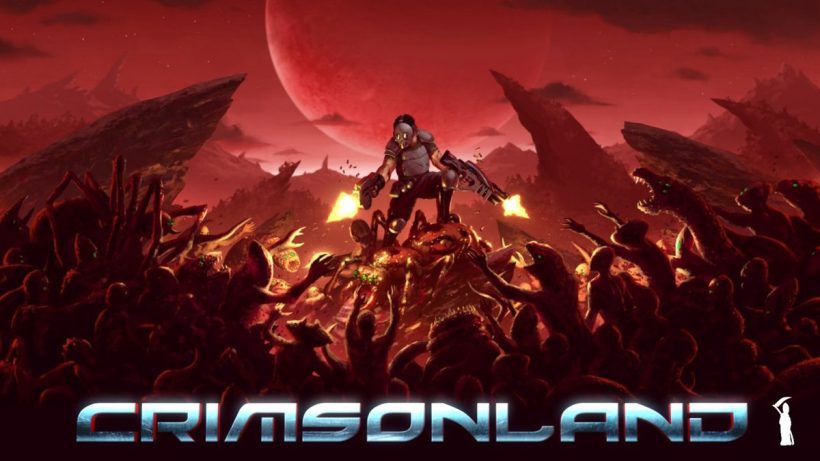 There are some games out there which may not have tons of depth, but they still manage to maintain your interest in an addictive fashion nonetheless. Crimsonland is one of those.

The game’s premise is a simple concept – just obliterate every enemy that appears on the screen until they’ve all run out. Everything is done from a top-down view, with the left stick for moving around, the right stick for aiming and the trigger for shooting. Every level has the same end goal, but a good amount of variation in the enemies keeps things interesting and keeps you on alert.

There are aliens, zombies and lizards, and in some levels hives will generate them continuously until they’re destroyed. You’ll have to pump a lot of bullets into them in order to do so, a feat made more difficult by the enemies popping up and surrounding you from every corner. The game handles loads of enemies being on the same screen really well, with no slowdown whatsoever. I found no reason to fault the performance whatsoever.

What are particularly pain in the posteriors, though, are the spiders. They can move with a lot more nimbleness than the other enemies, and the absolute worst will take damage only to split into two, and repeat this over and over until the screen is absolutely swarming in eight-legged hell.

It’s here where the game is at its most challenging. Your movement speed isn’t enough to overcome the spiders, and while you’ll try to strafe around the borders of the screen, you’ll soon get overawed. Heading into the mix of the enemies is rarely a good move, as you’ll take damage from all sides before you’re able to fire the bullets to take them down. Instead, you’ll need to make best use of the perks. You just need to shoot enough enemies in order to trigger a free perk (you’ll be able to choose from a group, with a short explanation of what each one does underneath), or alternatively just walk over one on the battlefield to pick it up.

With every passing level, you’ll unlock more perks and weapons for your arsenal, some more helpful than others. If you can, you’ll want to avoid the ones which sacrifice half of your health for a nominal boost, and try grabbing the ones which generate extra perks to generate randomly all across the map of their own accord (normally, they’ll appear when you shoot an enemy). Shotguns were my most useful weapon, although with the help of a few perks most guns can shoot through a group of enemies in a line and save you valuable time, ammo and health. A Catherine Wheel of projectiles is amongst the most useful aids you can find littered around the battlefield.

All of this can be done in co-op mode with up to four players, but completion is very much achievable on your own. Alternatively, there’s a survival mode, which has a range of modes including using just an assault rifle, using only the powerups and no weapons or a randomised weapon-spawning mode which gifts you just limited ammo.

It is a nice package and one which will keep you coming back till you’ve beaten all the levels. It’s not something which will have you going for the very long-term, but it’s something you can get out for a quick blast to show what the Switch can do.

Crimsonland offers some good twin-stick shooter fun that you’ll really enjoy blasting your way through. It’s great and addictive when trying to polish off the levels, but it is a little simplistic – that’s ultimately what separates it from the likes of Doom.